Woman, 24, who didn’t need a bra until she was 19 now has a 34K bust that keeps GROWING – and fears she’ll be left in a wheelchair if she doesn’t get reduction surgery

A woman with 34K size breasts which ‘constantly knock things over’ is desperate to raise £15,000 for a reduction, claiming her chest suffocates her at night and won’t stop growing.

Araba Banson, 24, from Battersea, south west London, said she also suffers from agonising back pain which leaves her bed-ridden, and spends £120 every time she has to buy new bras for her ever-expanding chest.

The art gallery curator admitted she only gets relief at night, when she’s able to heave her boobs to the side. 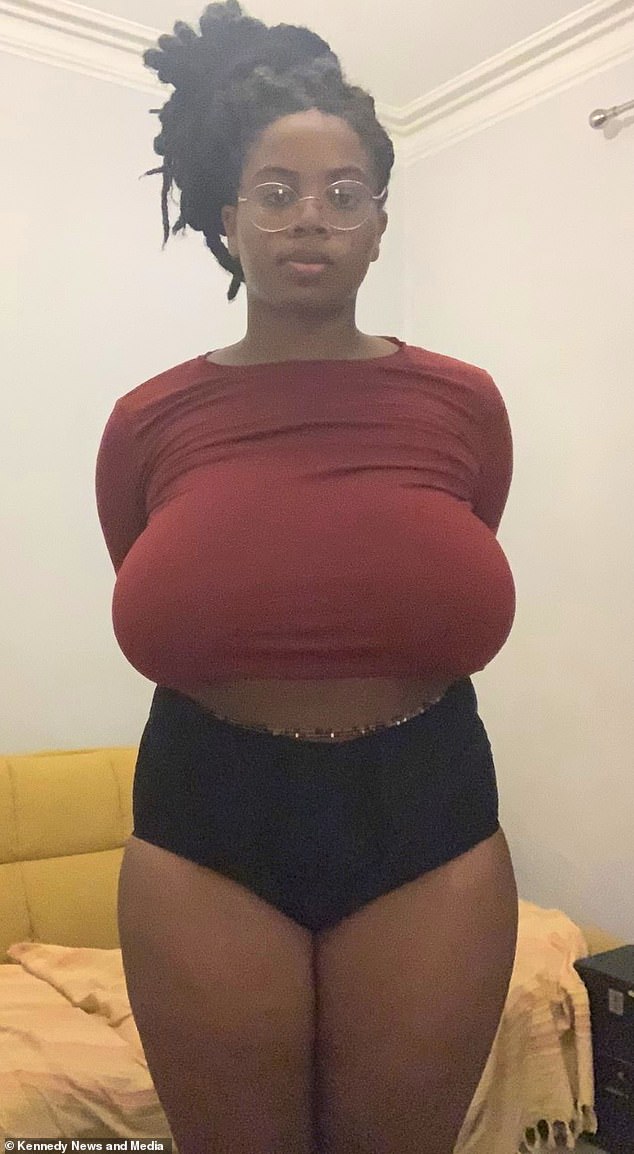 Araba Banson, 24, from London, is desperate to have her size 34K breasts reduced, saying she suffers from agonising back pain which leaves her bed-ridden 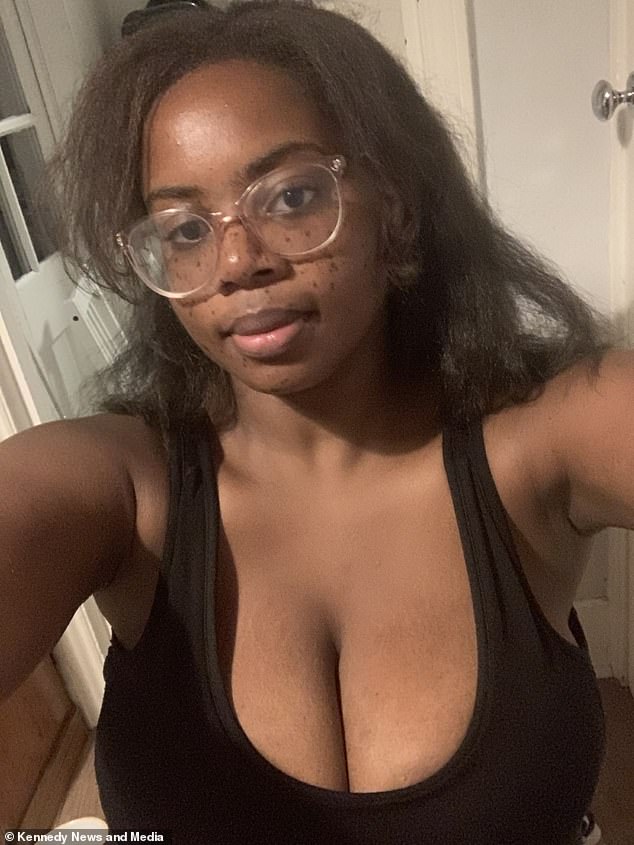 The art gallery curator from Battersea, south west London, admitted she only gets relief at night, when she’s able to heave her boobs to the side

Araba, who is 5ft 7in, added that she didn’t wear a bra until turning 19, when her breasts ‘suddenly grew’.

Now she suffers with painful rashes, spots and sometimes struggles to even breathe while laying down.

After allegedly being repeatedly turned away by doctors who tell her to lose weight before she can have any NHS surgery, 15st Araba almost gave up on her breast reduction dreams.

She previously loved playing sports, but the final straw was when she went on a rowing machine at the gym in May and couldn’t move her legs due to suffering slipped discs in her back. 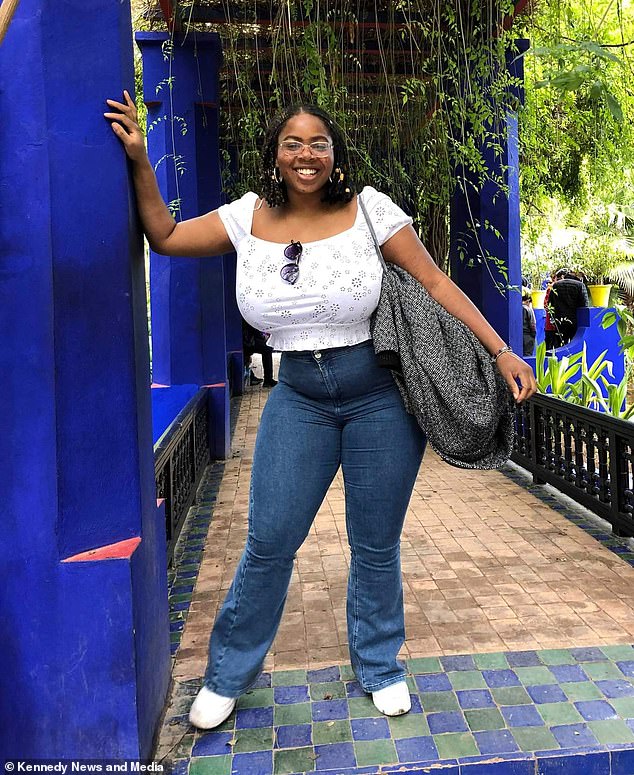 The 5ft7 Araba added that she didn’t wear a bra until turning 19, when her breasts ‘suddenly grew’ 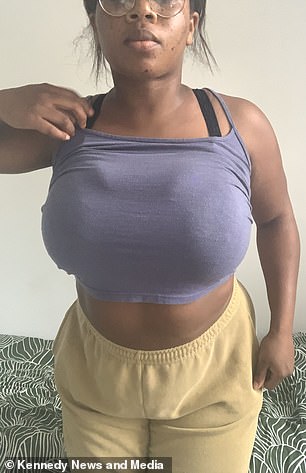 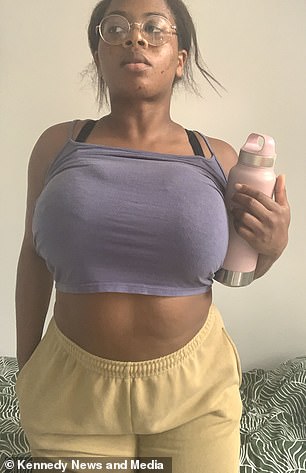 Now she suffers with painful rashes, spots and sometimes even struggles to even breathe while lay down 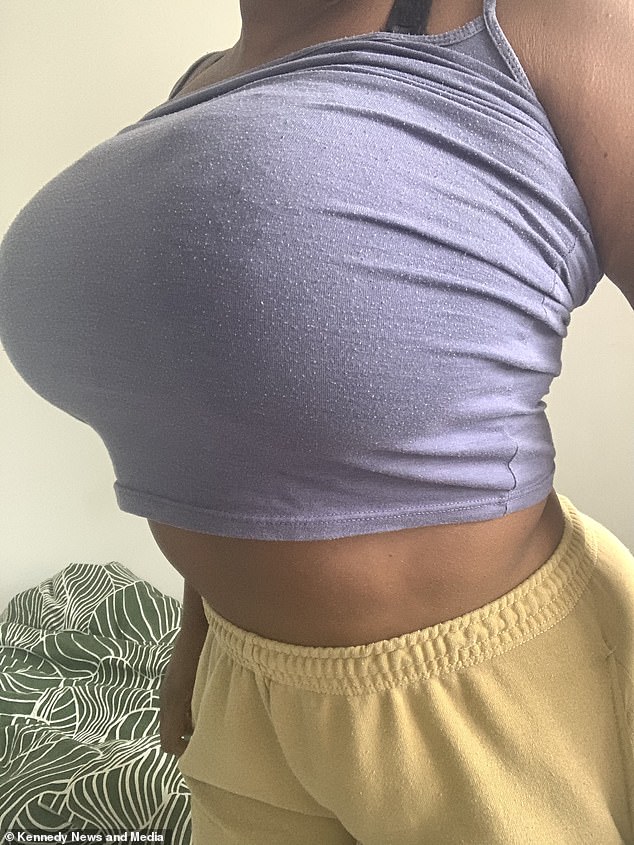 The 24-year-old said: ‘I didn’t always have large breasts, they started growing randomly when I was 19. One day I woke up and my boobs just kept growing…’

Araba was temporarily stuck in a wheelchair – and is fearful that her mobility could be further compromised in future.

TYPES OF GIGANTOMASTIA – THE CONDITION BEHIND EXCESS BREAST GROWTH

Gigantomastia can be divided into several subtypes. The subtypes are related to the event that may have triggered the condition.

That’s when she launched a fundraising page in the hope of getting the operation done privately.

The 24-year-old said: ‘I didn’t always have large breasts, they started growing randomly when I was 19.

‘One day I woke up and my boobs just kept growing. [Before then] I didn’t even wear a bra.

‘My first bra was a D cup. They just started growing very rapidly and they’ve been growing ever since.

‘This [started] when I went to university so throughout this whole time I’ve just been having problems with my back, which has been very frustrating.

‘The way they grow now, every couple of months I notice they’re bigger and I need to get a bigger bra.

‘Right now, I wear a 34K but my boobs are coming out of the bra so that’s an indication that I need a bigger one. I can’t afford a bigger one [so] I’ll wear this until I can.’

Araba first approached her doctor up in Aberdeen – where she was studying in late 2019 – to see if she could get a reduction on the NHS due to the pain and discomfort caused by her chest.

However she claims every time she went, and during subsequent visits to her London GP since 2021, she’s simply told to lose weight before she could be considered for the surgery. 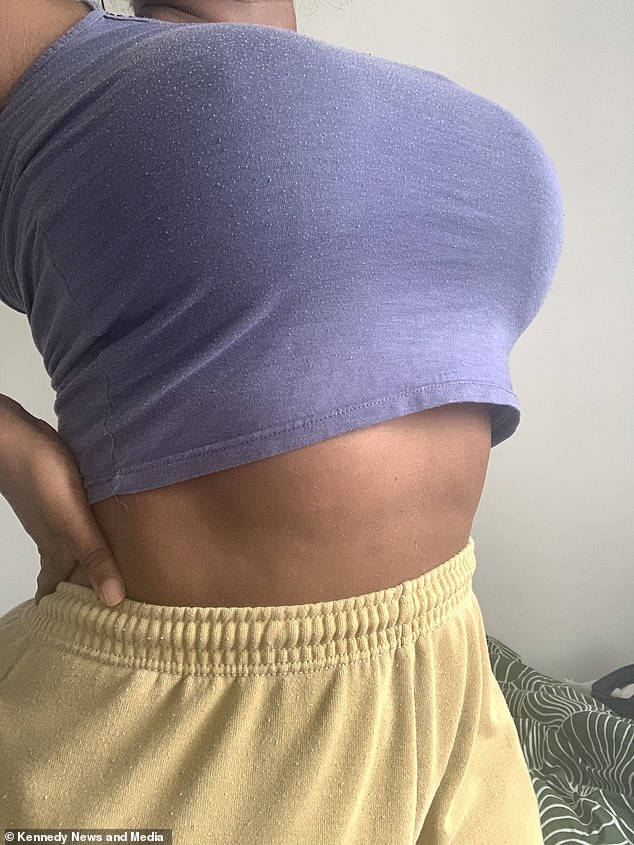 She added: ‘My first bra was a D cup. They just started growing very rapidly and they’ve been growing ever since…’ 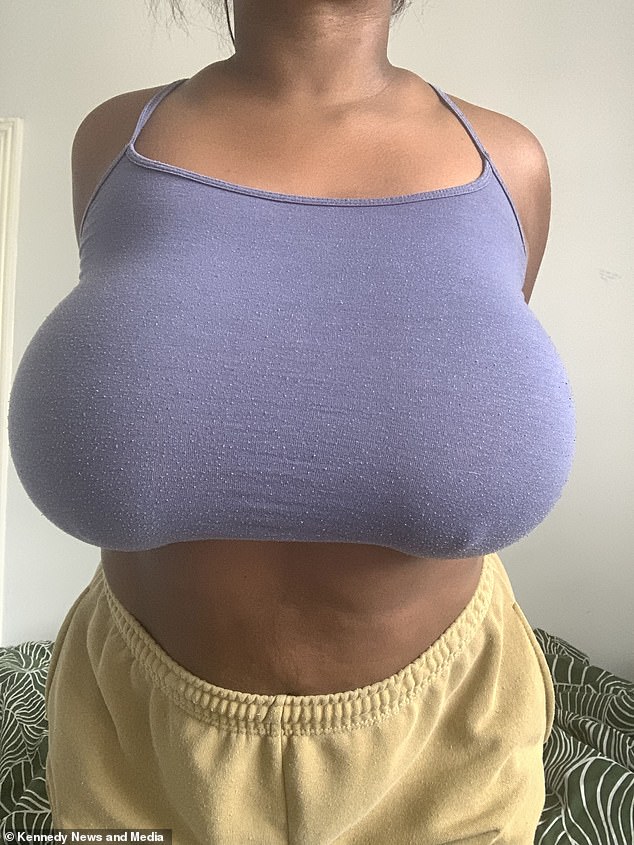 Araba said: ‘I’ve been to the doctors quite a few times, every doctor I’ve seen has advised me to lose weight so that my BMI will fit the criteria’ 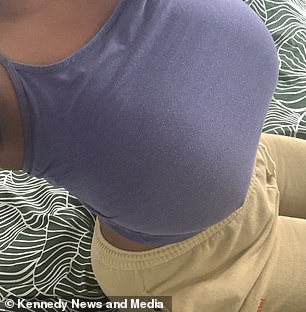 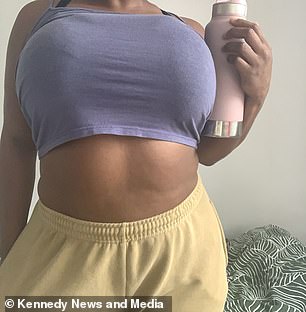 She added that she went to see doctors while at uni ‘a few times, after ‘finding lumps in her breasts’, back and shoulder pain, and simply ‘the fact that they were just too big’

Araba said: ‘I’ve been to the doctors quite a few times, every doctor I’ve seen has advised me to lose weight so that my BMI will fit the criteria.’

She added that she went to see doctors while at uni after ‘finding lumps in her breasts’, other times due to back and shoulder pain, and simply ‘the fact that they were just too big’.

‘Now I’ve moved back to London, I’ve been back to my GP quite a few times, but every time I’ve just been dismissed about this problem,’ Araba continued. ‘I was told because of my weight that they won’t consider it so then I started trying to lose weight and got injured.’

‘Recently I went to the doctor in London about it and he just came back with a straight “no” because of my weight.

‘I tried to argue that my breasts are causing the excess weight and again it was a “no”.

‘I went back again as I recently had a slipped disc in my back that the weight of my breasts really don’t help at all, they just prescribed me physiotherapy.

‘[The last time] I saw a GP and I did mention that I wanted a breast reduction and they asked me “Are you sure?” That was really awkward for me – of course I’m sure.’ 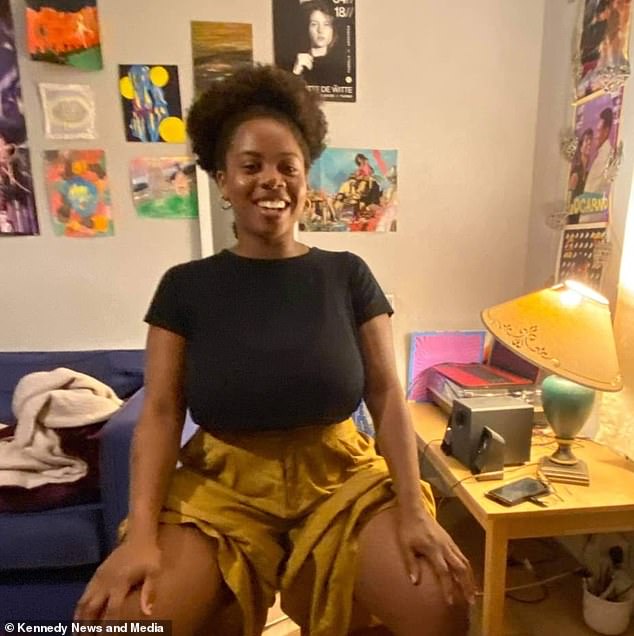 Despite the physical setbacks Araba, who’s forced to wear baggy clothes to accommodate her large chest, still tries to do some form of exercise for the sake of her health

Araba said that not only does she suffer from back and shoulder pain, but she also has trouble breathing, is sometimes bed bound and also regularly bumps into things with her cumbersome chest.

Araba said: ‘I struggle breathing because my boobs are just on me – I have such a weight on my chest.

‘When I’m lying down in bed it’s easier to breathe because I can lift them to the side.

‘It’s really affected my posture, my neck is now kind of bent and my shoulders are hunched forward.

‘I suffer from rashes underneath my breasts and I get loads of spots.

‘I’m bed-ridden quite often, maybe three times a year. It’s quite hard for me because I love being active and doing things.

‘I regularly bump into things and knock them over in the house. It’s a very small thing but it’s very frustrating.’

Despite the physical setbacks Araba, who’s forced to wear baggy clothes to accommodate her large chest, still tries to do some form of exercise for the sake of her health.

Araba said: ‘Sport is something that definitely keeps me grounded.

‘I try to exercise because it just makes me feel good about myself and it’s good for me.

‘Running and tennis are my go-to activities. I currently only have one sports bra that’s big enough and effective. I wear it with another bra but I can’t run as fast as I’d like to go.

‘Recently I took up rowing at the gym but usually run, play tennis and do yoga.’ 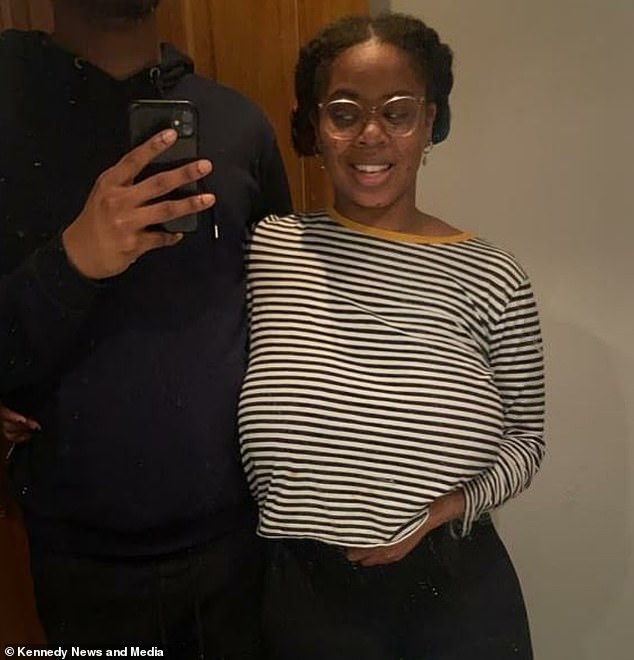 Araba said: ‘I struggle breathing because my boobs are just on me – I have such a weight on my chest…’ 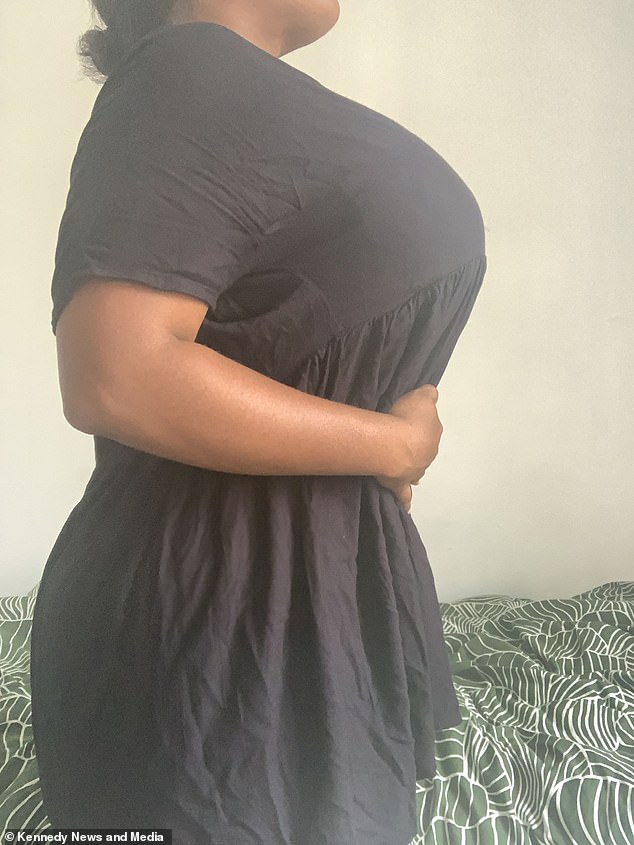 After repeated knock-backs and a frightening trip to A&E after a gym injury, Araba has decided to take matters into her own hands and is fundraising to get surgery done privately.

Can you get breast reduction surgery on the NHS? Size of a woman’s breasts, their weight, their age, whether they smoke, will be considered before surgery is offered

Breast reduction surgery is done to reduce the size and weight of a woman’s breasts, and involves removing fat, tissue and skin from the chest.

Genes, hormones and body shape and size may determine how large a woman’s breasts are – usually they are in proportion to the rest of the body but some women’s may be exceptionally large.

The NHS will not usually do a breast reduction for cosmetic reasons.

However, it may be considered if a women is experiencing effects like backache, neck or shoulder pain, rashes or skin infections beneath the breasts, or psychological distress.

The NHS may also consider the size of a woman’s breasts, their weight, their age, whether they smoke, and whether other solutions have been tried.

And local funding availability also plays a role – different NHS boards around the country have different criteria so women living in some areas may be more able to get the surgery than those in others.

Araba said: ‘I went to the gym to row. I leaned forward, I was really excited to get into the session, and then I realised that I couldn’t move my legs.

‘When that happened I had to painfully struggle to get to A&E. When I got there they told me that I had slipped discs in my back.

‘I was in a wheelchair, I was really upset at the thought that I couldn’t walk, that was just terrifying.

‘I would love to recover fully from these slipped discs but also I’m aware that any little thing could make my recovery not happen.

‘I thought ‘I’m not going to wait for this to get so bad that I literally can’t move before I do something about it’ because that was quite scary.

‘I think ‘if I’m going through this now, how will it be when I get older?’ It can only get worse.

‘After that, I looked at different surgery costs. I’ve seen some for £6,000 but I don’t want to opt in for a surgery that’s cheaper that’s not the best surgery I can get.

‘If I got the surgery I would be so much happier and more confident, it would be life-changing for me.

‘Right now I feel the life I’m living is a life that has been minimised because of all the effects of my large breasts.’

South West London NHS said before a breast reduction is undertaken, authorisation must be obtained by the treating clinician to demonstrate that the patient meets the agreed criteria for treatment and provide assurance that both the patient and the local population can expect to get maximum health benefit from the procedure in question.

The South West London ECI (Effective Commissioning Initiative) policy covers treatments and procedures that can be funded under clear criteria. 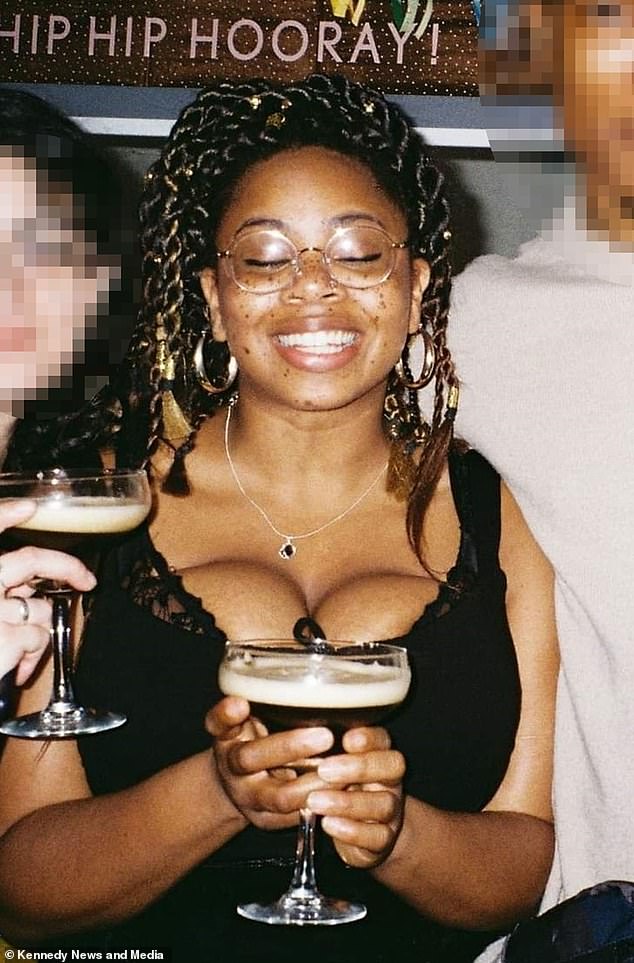 Arab, pictured on a night out with friends, said that she struggles to find clothes that fit her frame

The policy also ensures a consistent approach across south west London and each NHS pound is spent in a way that provides clinical value to our population.

A South West London NHS spokesman said: ‘Our local policy has been developed with clinical experts to ensure we treat people with the greatest clinical need.’

An NHS Grampian spokesman said: ‘We do not comment on individual patients but would encourage anyone with concerns about their care and treatment to get in touch.

‘This matter should be raised with the GP directly in the first instance. To escalate a complaint, details of NHS Grampian’s Feedback Service are available on our website: Feedback and Complaints (nhsgrampian.org).’

You can donate to Araba’s page here.

Meghan McCain From 'The View' Ignites Feud With Elisabeth Hasselbeck: 'Don't Need to Co-Host With Her Again'