CIRCUS
YOU & I  ★★★
Casus Circus, Gasworks Arts Park, until January 25

Circus today is well-suited to portraying love from the inside out, straying as it does into borderlands of dance and physical theatre. Even core skills – and perhaps especially the acrobatic duo – embody many of the emotional demands facing partners in a relationship.

Gasworks’ Midsumma program opens with You & I – a two-hander offering an intimate view of a committed gay relationship through contemporary circus. 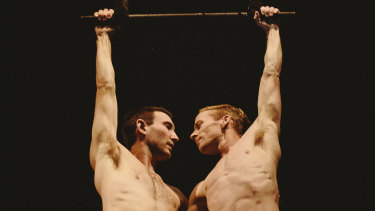 Jesse Scott (left) and Lachlan McAulay in ‘You & I’ at GasworksCredit:Katie Bennett

It’s certainly a striking way to explore trust and interdependence, the delicate balance between being together and separate. Jesse Scott and Lachlan McAulay use their uncanny prowess to suggest the playful and tender domestic textures of two men in love, drawing out the extraordinary in the everyday.

Between the quiet pas-de-deux that bookend the piece, acrobatic and aerial displays abound, often worked into unassuming moments of intimacy. Intricate hand-to-hand routines, for instance, imbue the highs and lows of coupledom with a spectacular and poignant depth of knowledge.

Even the most jaw-dropping feats can take on an aura of contented domesticity. In one acrobalance set-piece, Scott and McAulay perform dual handstands atop a precarious Jenga tower of kitchen chairs, with the same breezy nonchalance they might adopt on a trip to IKEA.

And when the couple are at a loose end at home, stage illusion and lightning costume changes (from glam drag to leather gear) liven up their ennui.

Just when it can all seem a bit too sickly sweet and sentimental, an aerial sequence on static trapeze launches into a melancholy mood, with Scott’s solo routine inflected by insinuations of loneliness and mental struggle, before whirling into an ecstatic reunion mid-air.

Despite the homoeroticism, You & I is free of raunch in a way that’s understandable in context. Gay men face a hypersexualised culture, from both within the community and in mainstream representation, and the focus on the unsexy business of sharing your life with someone feels like a corrective.

Yet it also risks sanitising the treatment of sexuality. Where’s the unruliness of lust? Where are the inherent tensions and contradictions of masculinity? 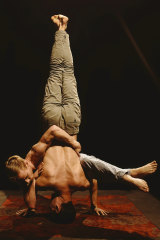 Even the most jaw-dropping feats can take on an aura of contented domesticity.Credit:Katie Bennett

Well, they’re largely whitewashed or downplayed, and that makes for a performance language with less eloquence and emotional range than, say, the contemporary dance work Un Poyo Rojo, seen at the Adelaide Festival last year, which tackled an intimate homosexual relationship with a freer hand.

The circus remains skilfully performed and imaginatively realised, even if the theatre and choreography don’t yet match it for clarity, expressiveness and daring.

Do Dates Really Care About Your Messy Bathroom? According To Experts, It Can Say A Lot