The first time Maia Chaka fell in love with football, she wasn’t even sure what the sport was.

As a child, she loved to go outside and wrestle the boys to the ground, having fun with her younger brother. Tossing a football around became playing with the neighborhood boys became a full-fledged passion for the game in her teens.

But when Chaka couldn’t find a tackle football team in high school that would accept girls, she switched to other sports. It wasn’t until her college years at Norfolk State University that she rediscovered her love for the game in a new way: officiating.

Armed with a bachelor’s in education, Chaka took a major leap and started two careers at once: a physical education teacher and a football referee. It did more than just pay off.

Today, Chaka became the NFL’s newest official, making her the first Black woman ever named to the NFL’s officiating staff.

Chaka has spent her career officiating major collegiate events, including roles at both the Pac-12 Conference and Conference USA.  She has been a part of the NFL’s Officiating Development Program since 2014, which takes officials at the college level and gives them experience and exposure at the NFL level, something she says took her to the big leagues.

“You can’t just wake up one day and decide to be an NFL official,” Chaka told CBS News on Friday. “You have to train. And just that constant exposure of being around it and being around other veteran officials. I think that was definitely helpful.“

She spent a lot of time and energy early on in her career trying to make it to the NFL. But as things seemed to move slower and slower, she took a step back and focused on becoming the best official she could be at her current level. This, she said, helped strengthen her talent and land her new position.

“I just really focused on building myself and getting myself stronger,” she said. “So I think they noticed my work ethic and how much work I really started to put into it.” 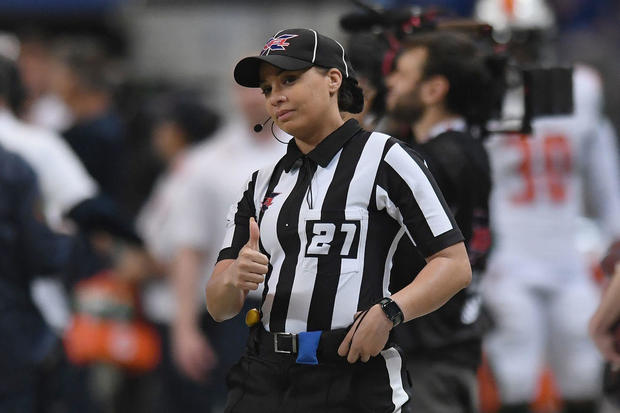 Now that she’s reached her goal, Chaka said she still feels exactly like herself. Her parents, who found out about her new role along with the rest of the world, are extremely proud of her hard work.  “But nothing will change,” she said. “When I go back home to visit, I’ll still have to wash dishes and do all that stuff.”

Chaka, who works as a teacher in the Virginia Beach public school system, admitted that the shock of her new job hasn’t really set in yet, but she’s excited about what her new role means to her students and the women who come after her.

“I think it’s bigger to (my students) than it is to me at the moment right now,” Chaka said. “But some of the best things I’ve seen all day today were screenshots of things that my older students were posting on social media and some of the kind of things that they were saying. You know, how much I changed their lives or what inspiration I was and things that were just motivational for them. I just think that was the greatest reward for me, just to get to know that what I was teaching them is still resonating with them to this day.”

It took decades for the NFL to hire its first woman official: Sarah Thomas in 2015. But Chaka doesn’t spend much time thinking about those who believe she doesn’t belong because of her gender. Instead, she recognizes just how much harder Black and Brown women have to work for recognition in any field, something she says would exist regardless of her career.

For now, she’s focused on that same thing she’s always been — being the best ref she can be. “Just because the door is now open, that doesn’t mean that I can relax. I still go through that football mentality. I still have that hustle, that dog mentality every single day — and that’s the grind.”