George Clarke’s Amazing Spaces viewers praised a man who created an ‘inspiring and magical’ safe hideaway at the end of his garden for his toddler son – using old logs and recycled Christmas trees.

Lauren and Will, from Suffolk, had just £500 to build an outdoor play den for son Thomas and his soon-to-arrive baby sister.

But with his dad in his corner, Will refused to let his small budget stop him from creating something inspiring – and recycled tree trunks and old Christmas trees to keep costs down.

And viewers were quick to take to Twitter once the nature-inspired hideaway was revealed.

‘My absolute favourite. So inspiring and magical,’ praised one, while a second penned: ‘I’d love that little hobbit house myself. How lovely for Thomas to have that from his dad and granddad.’ 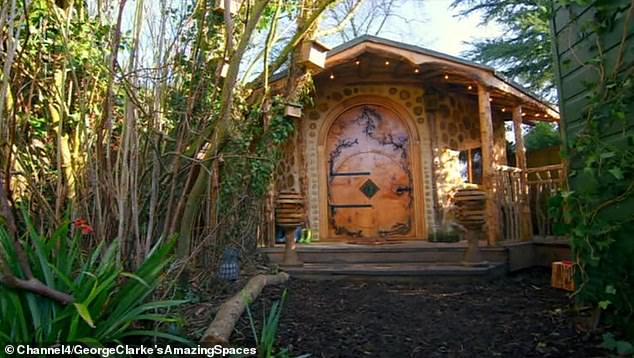 Lauren and Will, from Suffolk, had just £500 to create an outdoor play den for son Thomas and his soon-to-arrive baby sister in last night’s episode of George Clarke’s Amazing Spaces 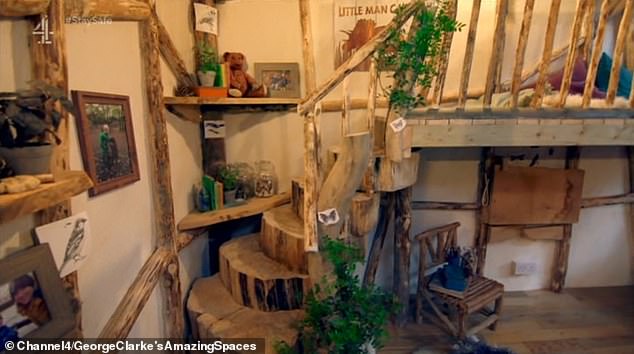 Will and his father built the project using old logs and recycled Christmas trees. Pictured, the wooden stairs 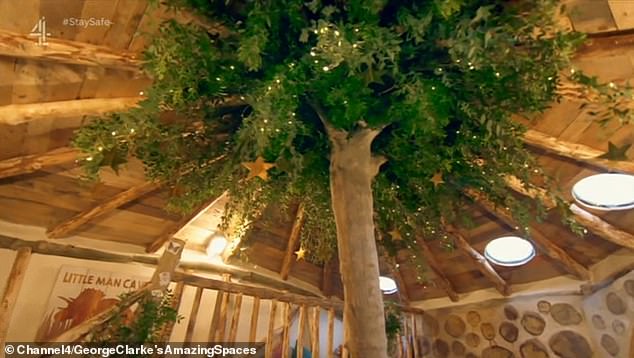 George said the fantasy house looked like something taken straight from the pages of a fairy-tale book. Pictured, the tree at the heart of the build

And it wasn’t just viewers who were taken aback by the fantasy house – as George was left in shock at what Will and his dad had achieved.

‘I have to say it’s beautiful. Absolutely beautiful. I love the door,’ he enthused.

Lauren added: ‘I’m really proud of it. We’re never moving. Never! And if we do, this is coming with us!’

Hoping that the interior was as good as the exterior, the presenter and Lauren – who was also yet to see the finished build – headed inside. 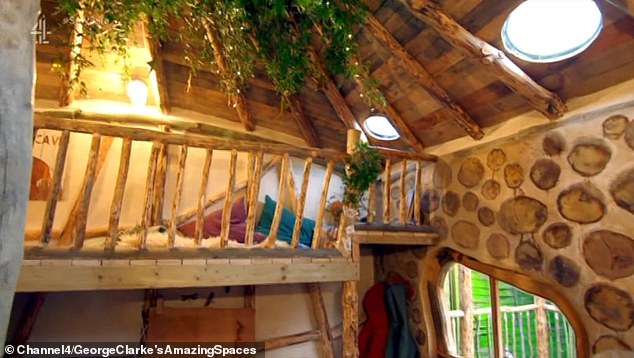 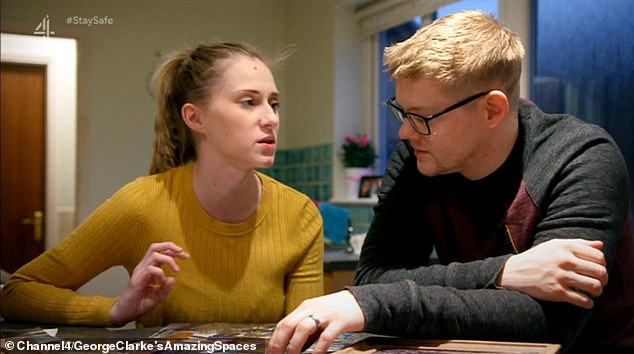 Lauren (pictured, with Will) said she wanted to something which felt ‘quite outsidey’ – like an  ‘actual tree-house but at ground level’

‘That is fantastic,’ said an impressed George. ‘It’s pretty special isn’t it. It looks really beautiful.’

‘To me it looks like you’ve just taken the pages straight out of a lovely fairy-tale book. It feels really romantic and magical, but a classic kid’s fairy-tale mini house at the end of the garden.

‘I love this upper level mezzanine. What a great little den up there, isn’t it?’

Will added: ‘I’m so chuffed with it. And this is a little daybed with a blackboard on the other side. So he can do his drawings and things, but on a nice day in the summer he can have a little nap.’

A delighted Lauren agreed: ‘It’s incredible. It’s got all my little bits and bobs that I’d asked for.’

And much to presenter George’s surprise, Will managed to complete the nature-inspired build within budget.

‘We’ve been lucky in terms of the people we know and things we’ve managed to get. But this whole project I’ve managed to do for £479.70,’ explained Will. 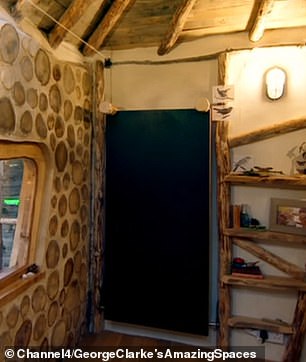 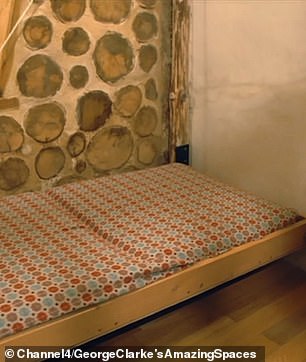 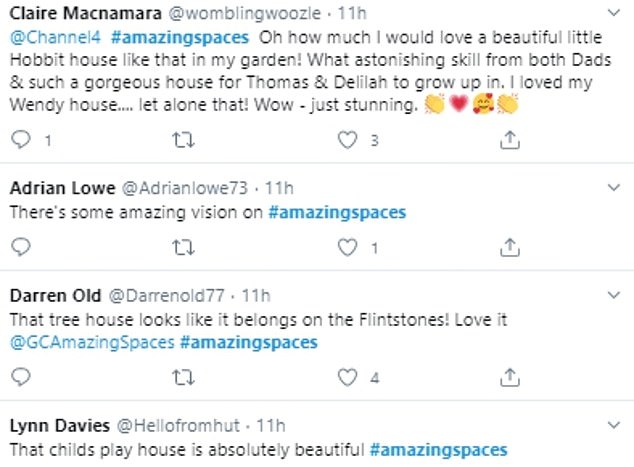 It wasn’t long before viewers took to Twitter, with one writing: ‘I’ve love that little Hobbit House myself’ (pictured)

‘All of the decking and the wood that we’ve used was all out of a skip. It’s been awesome to find stuff other people have thrown out because it’s no good to them, has been such a help for us.’

And many who tuned in were left more than impressed with the rustic and spellbinding design.

One viewer penned: ‘Oh how much I would love a beautiful little Hobbit house like that in my garden! What astonishing skill from both Dads & such a gorgeous house for Thomas & Delilah to grow up in. I loved my Wendy house…. let alone that! Wow – just stunning.’

A second added: ‘That child’s play house is absolutely beautiful,’ while a third agreed: ‘There’s some amazing vision on #amazingspaces.’

Another enthused: ‘OMG I want that little house,’ while a further agreed: ‘That Hobbit house at the end of the garden is adorable.’

‘DWTS: Juniors’: Alan Bersten Reveals Why Sky Brown Was Such A Fan-Favorite This Season

Taylor Swift, Lizzo, & More Will Perform On Lady Gaga’s ‘Together At Home’ Special