One of Australia’s most respected Indigenous academics has fired off a withering broadside at RSL president Greg Melick and opposition veteran’s affairs minister Barnaby Joyce, declaring the Australian War Memorial must tell the truth about the frontier wars between Aboriginal people and the British colonists.

Melick, who is also on the governing council of the Memorial, and Joyce have said the Memorial is not the right place to record the history of Australia’s frontier wars and that this should happen at the $320 million Ngurra cultural institution, which will be constructed in Canberra’s parliamentary triangle. 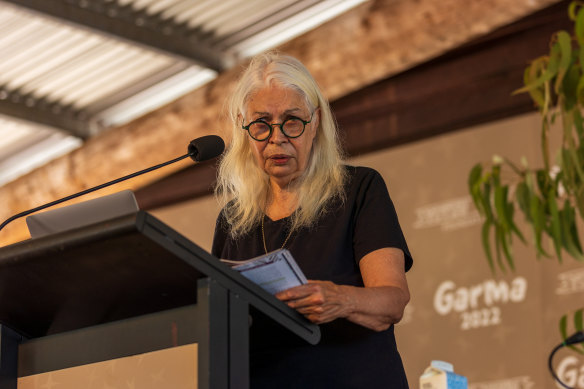 Joyce said on Thursday the Memorial’s role should not be reconfigured.

Professor Marcia Langton hit back, saying “it’s high time the War Memorial started telling the truth and disposed with the myth of Australia for the white man”.

The Memorial is currently undergoing a $550 million redevelopment and following the change of government in May, the institution’s governing Council decided to give a more prominent place to recording the history of the frontier wars. There is already a painting depicting a massacre on display within the Memorial.

Langton, a University of Melbourne associate provost and Chair of Australian Indigenous Studies, said it had taken the Memorial “far too long to correct the record on that part of our history, that is that Aboriginal and Torres Strait Islander people served in our defence forces, not only in wars and other engagements but in peacekeeping”.

“In World War I, [some of] the Aboriginal and Torres Strait Islander people who signed up to serve had literally walked off the battlefields in Australia to join the war effort,” she said.

“Not only that, many of those people who served in our defence forces came back to Australia and were then viciously discriminated against and returned to a situation where they were paid no wages or not as much as everyone else.”

“The conflicts that followed invasion are a key part of our history and help build understanding about the uphill struggle First Peoples continue to face in this country”.

Melick told The Australian the RSL believed the focus of the memorial should be on those who have served in defence of the nation.

“Conflicts are an entirely different matter and are a significant part of our history that would be more appropriately told in the National Museum or a national memorial,” he said.

Veterans affairs minister Matt Keogh said the government was happy with the decision taken by the Council and “it would be appropriate to have some contextual reflection on this in the War Memorial”.

“It’s not saying it’s replacing a whole heap of stuff but just that it would be appropriate to have some of these things exhibited”.

“The members of that Council were all appointed by the previous Liberal government, and, in fact, the RSL is represented on that council. I met with the RSL National Council yesterday. They didn’t raise any concerns with me about this,” he told radio station 6PR.

“I listen to all veterans across the 3500-plus ex-service organisations, of which the RSL is but one. And the RSL’s voice was clearly heard because the President of the RSL [Melick] is a member of the Council.”

Opposition defence spokesman Andrew Hastie, a former soldier, said the Coalition is opposed to introducing any sort of exhibition or historical elements which detract from the purpose of the War Memorial and agreed the frontier wars should be memorialised in the Ngurra cultural precinct.

“The purpose of the War Memorial is to commemorate Australia’s fallen – those who have died in conflict defending our country,” he said.

“I represent an electorate that [had] … the Pinjarra massacre. It’s very important that we remember these things. But we’ve just got to be careful about the purpose of these national institutions. Ngurra is going to tell the Indigenous Australian story, and the War Memorial commemorates our war dead.”

“The War Memorial was established by the Australian Official Historian Charles Bean of the First World War, who wanted to remember those who died – the 60,000 Australians who died in France, in Gallipoli and the Middle East. And the architecture of the building itself reflects Bean. That’s why it has the dome and it looks Byzantine because, you know, it’s tied up with World War I.”

July 27 – On this day: 77 years since Clement Attlee demolished Churchill