In 2012, when this was first in development, it was called Continue. That title contained the basic idea: a man wakes up every day in the same day, only to die and be reborn. Even the director Joe Carnahan called it “Groundhog Day as an action movie”, so there’s no point lambasting it for plagiarism. The word no longer appears in the Hollywood dictionary, except for a note saying “see homage”. 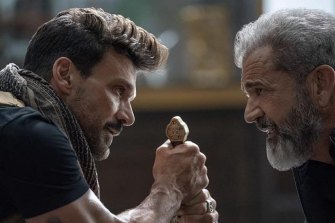 The new title doesn’t even have that small relevance. It might mean something to gamers, its target audience. In short, it’s a first-person-shooter with a time-travel twist – part comedy, part science fiction, part gore-fest.

Roy Pulver (played by the firm-jawed, highly ripped Frank Grillo) is ex-special forces. His loop day consists of being attacked by assassins, one of whom always gets him in the end (or the neck, given his repeated beheadings). These are a mirthful bunch – a Chinese gal with a sharp sword, two bald black guys who speak only German, a replica Roy, a little person with a sticky bomb and two bazooka-packin’ Latinas in a fast car – for maximum car action.

Roy doesn’t understand why he’s in this hell, but it’s something to do with his brainy former wife (Naomi Watts) and her Dr Evil-type boss, played by Mel Gibson.

If the cast is above average, so is some of the humour, although dark doesn’t quite describe it. Dark and red might be closer. Carnahan has made a series of efficient, not always dumb, action entries: Narc, Smokin’ Aces, The Grey. Now he wants to take the genre apart with irony and re-examine it, while winking at the audience as he throws another body at us, head first. The problem is that some of the actors seem to be in different movies. Mel Gibson is hammy, rather than terrifying; Naomi Watts is doing sexy-serious-scientist in stilettos, in a role that makes no more sense to her than us. Only Frank Grillo seems completely at home in this maelstrom of blood and repetition. His character is bemused, casually vicious in his daily despatch of his opponents, whimsical when they inevitably finish him off each day.

It’s not quite Philip K. Dick in the science department, although there are some weighty concepts. Einstein posited that time bends, if you go fast enough. Harold Ramis posited that regrets could be fixed by looping time. Casting Bill Murray as the perfectable man really was genius. Boss Level substitutes blood and speed for the metaphysics, but there’s no great ambition at work here, except to make a better class of throwaway movie. Battery as the sincerest form of imitation, perhaps?