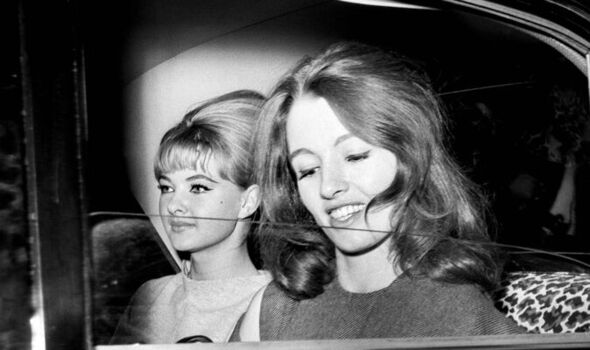 British intelligence believed that at the height of the Cold War, Kremlin’s London-based naval attache might even be persuaded to defect to the West. Security bosses sent an agent codenamed Cat Burglar to approach Ivanov at a night club party crammed with the military top brass and their wives.

Cat Burglar tried to manipulate him by claiming to have heard the Kremlin planned to recall him to Russia over his debauchery. Ivanov, 35, would then be given the chance to avoid giving up his London high-life.

Both Ivanov and Keeler knew Stephen Ward, an osteopath who had groomed her after they met when she was a club dancer.

Profumo quit the Government in disgrace in June 1963, after lying to Parliament about the fling, following lurid disclosures of high-society sex parties.

Mandy-Rice Davies. The files released by the National Archives in Kew, south-west London, yesterday, reveal that before the scandal broke, MI5 chiefs were interested in using Ivanov.

He said: “We are contemplating making an approach to Ivanov and have had discussions with the Foreign Office about it.”

Ivanov’s drunken groping and wanted to know if it would jeopardise any MI5 plan.

But Sir Roger said: “A protest to the Soviet Ambassador about Ivanov’s behaviour would not interfere in the least with our plans and would indeed be helpful to them.”

The documents reveal how Ivanov came to Britain in 1960 and used his attache role as cover to spy for the Soviets’ GRU military intelligence.

Accompanied by his wife Mayja and another Russian officer, he drove all over the country, gathering information on defence sites.

Detectives tracking him said he overturned his car near Aldershot and all three needed hospital treatment.

Naval intelligence mentioned the incidents to MI5, along with his “outrageous” behaviour after gate-crashing their director’s Christmas party with his wife.

Documents said: “He made himself conspicuous by his heartiness, they were practically the last guests to leave and this required some persuasion. Ivanov was asking for treble whiskies.”

The “aggressively hearty and argumentative” behaviour surfaced at another bash, for the US naval attache, and at a flat party, he was invited to later.”

“Russians were late arriving, having gotten lost on the way, but determined to get there.”

“Two hours later Ivanov was drunk. Propositioning, pinching and dancing with women in his stockinged feet and deliberately treading on their toes.”

Ivanov made passes at the American attache’s wife “while driving the car” to another rendezvous and later “came very near caressing” the French attache’s wife.

It concludes: “If this addiction to alcohol is real and not assumed, then this lack of discipline might make him a possible subject for our own exploitation.”

Cat Burglar approached Ivanov at the Columbia Club, Bayswater, in February, at a diplomatic party, and they struck up a relationship which lasted at least a year.

The heavily redacted files, do not confirm whether Ivanov passed information to MI5 through Cat Burglar.

Ivanov later “mended his ways” after being promoted but was recalled to Moscow in January 1963 as the Profumo scandal was about to break.

His close friendship with Ward led to the doctor being used by the Foreign Office to pass information to the Russians during the 1962 Cuban missiles crisis.

Among the release of documents by the National Archives was

Ward’s complaint that he was “being assassinated” by the Profumo scandal.

He wrote to Opposition leader Harold Wilson from Brixton prison to plead his innocence. But he was convicted of living off the immoral earnings of prostitutes.

He died at 50 before he could be sentenced at the Old Bailey, having taken a drug overdose. Other revelations from the released files show

MI5 noted that a “dangerous drug” which could be “very useful” for intelligence services was being used in the social circles of the woman in the Profumo affair.

A British intelligence services document dated July 1963 said Methadrine was prescribed by doctors to tackle heroin addiction, but if misused could become “quickly and dangerously addictive”.

The note added: “It is also much used by psychoanalysts because it breaks down inhibitions rapidly and completely.”

The drug had “remarkable” side effects, the document said, including rendering a person “incapable of resisting orders to do anything while under the influence”.

The note said that Mandy Rice-Davies, a friend of Keeler’s, had been seen under the influence of the drug after an American “con man” crushed up to six tablets into a glass and gave it to her.

Rice-Davies experienced all the expected symptoms, with the note adding that by the time “acute schizophrenia” set in, “the subject will do or say anything he or she is ordered to do or say”.

“Original strength of mind can offer no resistance.”