Land clearing approvals have now hit more than half a million hectares in four years in NSW, despite calls from the government that land clearing threatens biodiversity and emission reduction targets. 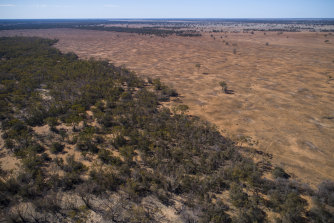 Land clearing approvals have hit more than half a million hectares in the past four years.Credit:Wolter Peeters

Most of the land approved for clearing is for native invasive species management, making up about 495,935 hectares of approvals, while pasture expansion comprises about106,646 hectares. This type of clearing was deemed by a cabinet-in-confidence report in July 2019 by the Natural Resources Commission as a “risk to biodiversity statewide”.

The majority of approvals occurred in the central west, north-west and western regions.

“While landholders may obtain an authorisation under the code for the intended treatment of native vegetation, for a multitude of reasons, these authorisations may never actually be implemented,” he said. “Our latest data shows that between 2018 and 2020, just over 3 per cent of total authorisations were carried out.”

The latest NSW State of Environment report launched this year notes there needs to be significant action if NSW is to achieve its emissions reduction targets in sectors including agriculture, energy and land clearing. The report also found vegetation clearing and the spread of invasive species posed significant challenges for many threatened species.

Clearing of woody vegetation in NSW had been steadily increasing since 2015, with a slight decrease in 2019. While down about one-tenth on the previous year, the rate was 40 per cent more than the 2009 to 2017 average before new laws took effect, the report notes.

“The government has rubber-stamped approvals to clear a shocking amount of bushland – more than 1000 square kilometres for pasture expansion in just four years,” Nature Conservation Council Chief Executive Chris Gambian said. “That’s an area almost half the size of the Australian Capital Territory.”

He added that no government inspects had been out to visit the approved sights to see what would be lost before granting approval, leaving landholders to decide for themselves what should be cleared. This was having negative impacts on a range wildlife and undermined efforts to tackle climate change, he said.

Independent NSW MP Justin Field said while the majority of approvals had not been acted upon by landholders, they represented a bigger issue.

“Land clearing approvals under this NSW government are a ticking time bomb for biodiversity,” he said. “This government has not only been weak on protecting biodiversity, they are leaving a legacy that could be hundreds of thousands hectares of more clearing.”

NSW Farmers Vice President Xavier Martin said farmers were balancing the protection of the environment with productivity of the land.

“The fact is that when you look at this issue as a whole, farmers growing food are not having a major impact on the total amount of vegetation in our state,” he said.

“It is also important to understand which pathway through the code is used. There is no way to ‘clear’ vast amounts of land without prohibitively expensive offsets. This idea of broadscale clearing to convert to cropping land is not possible under the codes.

“The most common use of the codes is to manage invasive native species, which actually encourages better biodiversity outcomes.”