Home » Lifestyle » Mr Smith’s not going to Washington, but this Labor leader should be

The appointment of Stephen Smith as Australia’s next high commissioner in London is a good, but surprising, choice.

There is no doubt that Smith – a former defence and foreign minister – is well-qualified for the role. His deep familiarity with national security issues has only been enhanced by his post-political role as professor at the University of Western Australia’s Defence and Security Institute. But surprising nonetheless, since many (including me) thought he would be a more natural fit for the United States.

I’d be surprised if Smith doesn’t think so himself. Nevertheless, as the AUKUS pact moves into the implementation phase, his experience will be welcomed in London. 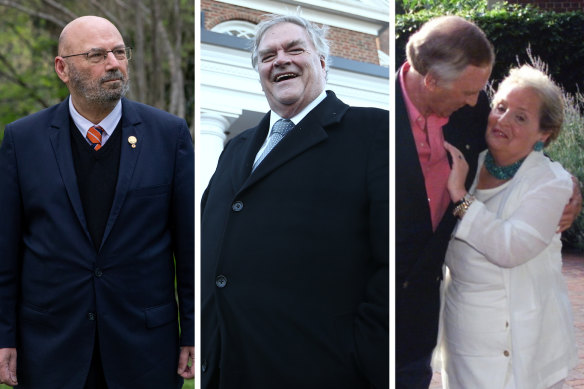 Australian ambassadors to the US: Arthur Sinodinos, Kim Beazley and Andrew Peacock, pictured with former US secretary of state Madeleine Albright.Credit:

Since Mr Smith isn’t going to Washington, the question naturally arises, who will replace the current ambassador Arthur Sinodinos when his term finishes?

Sinodinos has been a huge success in the post – as his material contribution to the AUKUS pact testifies – as were his predecessors from both sides of politics. Joe Hockey’s term, which coincided with the Trump presidency, was a true case of cometh the hour, cometh the man. Few if any foreign leaders or senior diplomats enjoyed such personal chemistry with Trump: two big personalities who enjoyed one another’s company both in the White House and on the golf course. The benefits to Australia – for instance, the fact that we were the only US ally exempted from Trump’s steel tariffs – is a perfect illustration of what successful diplomacy can achieve. 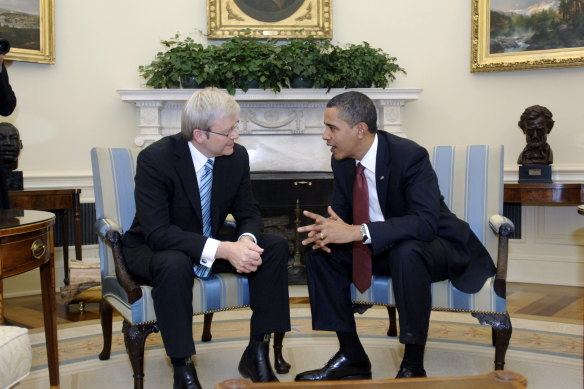 Before Hockey, Kim Beazley was one of the most popular people in Washington. As I witnessed on my visits at the time, the depth of Kim’s knowledge of American politics and history left senators and congressmen astonished; his fetching combination of gregariousness and raconteurial erudition won him access at the White House and on the Hill which envoys from much larger nations envied.

Anthony Albanese and Penny Wong should put aside carping about political appointees and select for Washington the person who is likely to have the most influence. That is the ultimate test of an ambassador: who can get the best access and wield the most influence with the host government to advance Australia’s interests?

One name that keeps cropping up in speculation is Kristina Keneally. Although American by birth – an irrelevant consideration – there is no reason why she should be in the mix. Yet in the Byzantine world of Labor factional politics, Keneally continues to enjoy much institutional power through the patronage of the NSW Right. Albanese and Wong should put any such idea out of their minds.

Our most important ally, which has just paid Australia the great compliment of appointing as its ambassador to Canberra one of America’s most admired public figures, would rightly feel that the relationship was being disrespected if we reciprocated by using our most important diplomatic post as a parachute for a failed carpetbagger. It would be egregious if Smith had been shoved aside to make way for Keneally.

There is another prominent Labor figure who does meet the dual tests of stature and experience. That is Kevin Rudd. I have no idea if he is interested in the job. But if he were available and willing, he would be a very smart choice.

In saying that, I do not relent for one moment from the many criticisms of Rudd as prime minister. His was not one of the better Australian governments (to say the least), and much of its dysfunction can be laid directly at Rudd’s door. Nevertheless, he does have the stature of having been a prime minister – twice, in fact – which, in the eyes of foreign governments, counts for a lot. Nobody in Washington would care one iota about – or even have heard of – Pink Batts and overpriced school halls. The domestic controversies which dogged Rudd’s governments are irrelevant to his suitability for the role. 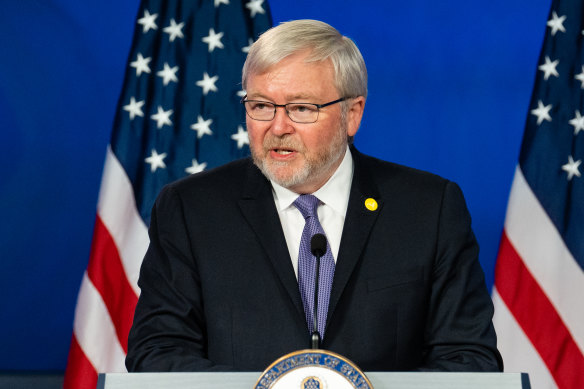 Kevin Rudd is highly thought of in Washington, both as a former prime minister and an expert on China.Credit:Bloomberg

Of greater importance than the stature Rudd enjoys as a former head of government is his acknowledged expertise in international affairs. His area of specialist knowledge is the issue which poses the single most important and perplexing challenge for American political leaders and foreign policymakers in the years ahead: China.

A former diplomat himself who served in Beijing, Rudd has in the years since he left parliament won a well-deserved global reputation as a serious and authoritative commentator on and interpreter of Chinese politics and foreign policy. It is testament to the respect his views command in the US that he was invited to become president of the New York-based Asia Society – one of the bastions of the East Coast foreign policy establishment.

Last month, Rudd graduated with his doctorate from Oxford. By coincidence, the same weekend, I was participating in a conference hosted by the Centre for Geopolitics in Cambridge. One of the participants whom I got to know was Rana Mitter, the professor of the History and Politics of Modern China at Oxford and director of the Oxford China Centre. Mitter, who is the rockstar of contemporary China scholars, will soon take up the chair in China studies at Harvard. He also happens to have been Rudd’s thesis supervisor.

His admiration for our former PM’s understanding of contemporary China was unstinting. Rudd’s thesis topic was a study of the theoretical bases of Xi Jinping’s approach to international relations, based on close study of his extensive writings on the subject, including much material untranslated and hitherto inaccessible by most Western scholars. (Rudd, it will be remembered, is fluent in Mandarin.). The book that will soon be published based on Rudd’s thesis would, Mitter enthused, become one of the most important contemporary analyses of China’s foreign policy and guides to its likely future course.

If, at a time when America’s response to the China challenge will be the most important question in global politics, Australia’s ambassador to the US also happens to be one of the most sought-after authorities on Chinese foreign policy in the English-speaking world; and if that same person has the stature of having been a prime minister, I doubt there could be anyone better equipped to project Australian influence in Washington.

It also helps that Rudd has always enjoyed a good personal relationship with Albanese – and, with no disrespect to DFAT officers who are constrained by public service protocols and confined to formal channels, what governments in Washington and London want as the senior Australian diplomat is someone they know can pick up the phone and speak directly to the prime minister.

Were Rudd to be Albanese’s choice, the opposition would do well to extend bipartisan support – just as Labor did during Mathias Cormann’s successful campaign to become secretary-general of the OECD. In doing so, Peter Dutton would need to move beyond the hyper-partisanship which in 2016 saw him play a leading role in the Turnbull government’s refusal to support Rudd’s bid to become the secretary-general of the United Nations.

I always sensed that Turnbull felt uncomfortable with that decision – taken against the strong contrary view of his Foreign Minister Julie Bishop, as well as others among his supporters including Christopher Pyne and myself. But those were the days when Malcolm was convinced that the best way to keep the right wing of the Liberal Party off his back was to give them whatever they wanted; Rudd’s UN candidacy fell victim to his policy of appeasement (as in the end did Turnbull’s prime ministership).

If Dutton is to make a successful transition from hard-right head-kicker to credible alternative national leader, showing that he has put those days behind him, and is willing to put national interest above point-scoring against a former political opponent who has long since departed the field, would send a good signal.