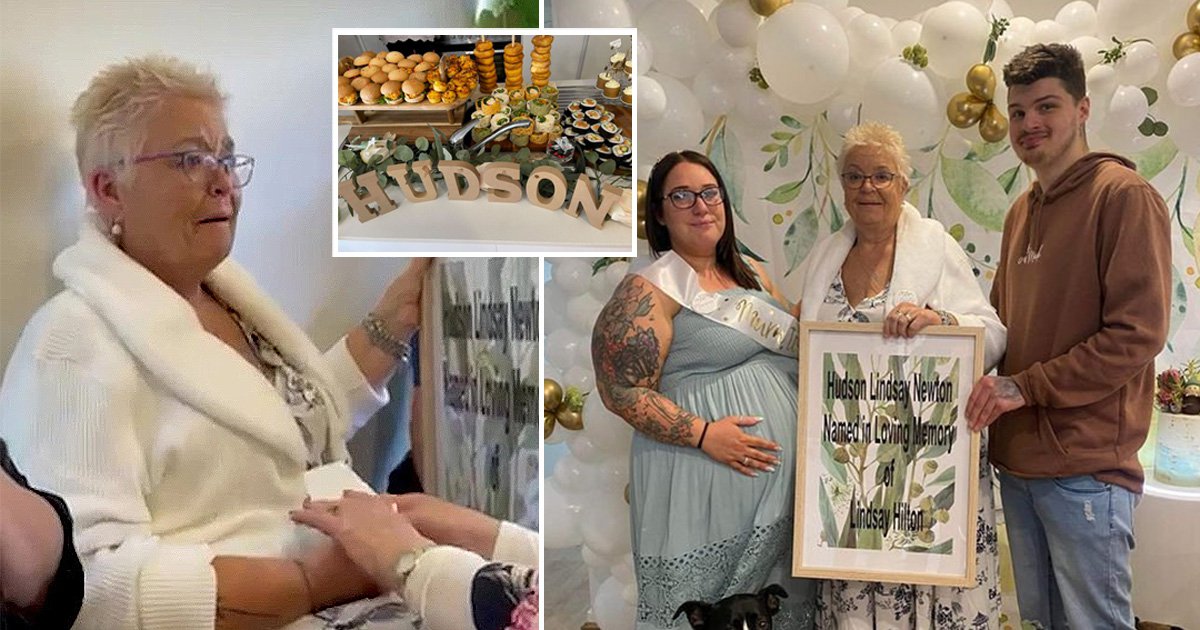 When Kirri Ord and fiancé Dylan Newton learnt they were expecting a baby, they knew it was the perfect chance to show their Aunty Sue just how much she meant to them.

Despite not actually being related to the pair, Suzanne Hilton, 68, had been a rock for the couple, who have been dealt their fair share of obstacles in recent years.

So, as a thank you to Sue, the expectant parents revealed that they had chosen to name their baby after her late husband, Lindsay, who died of a heart attack aged just 49.

Kirri, 29, said: ‘Sue has been an extremely supportive and important part of our lives for the past few years.

‘We were both so happy that she was happy and was happy with our decision to name him after Lindsay.’

Kirri and Dylan, 25, were desperate to have a baby together but endured two miscarriages.

Thankfully, their Aunty Sue was by their side.

Sue also treated Kirri’s seven-year-old son, Mason, as her own grandchild and supported the couple through financial issues.

Kirri explains: ‘After our unfortunate loss of two pregnancies, she was such a strong support person.

‘Both myself and Dylan had given up on a child together, and just never thought it would happen.

‘She has helped us through some financial problems and has accepted my son Mason, seven, as her own grandchild, and became family to all of us.

‘We have both admired her love for Lindsay and her commitment to him, even though he passed so long ago.’

The couple decided to tell Sue of their decision at their baby shower during a game of pass the parcel.

Unbeknownst to Sue, she was also going to get the final unwrapping.

A beautiful video, filmed by Kirri’s step-sister Sammie Buck, 21, captured the moment Sue unwrapped a framed piece of card with the name of Kirri’s baby printed on.

The sweet video clip shows Sue bursting into tears at the beautiful tribute with guests racing to comfort her with hugs and tissues.

Beauty therapist Kirri, who is due to give birth on November 19 and lives in Werribee, Victoria, Australia with mobile plant technician Dylan, said: ‘The whole day of the baby shower, I was uncontrollably emotional.

‘I never thought I’d have the chance to share the excitement of another baby with my loved ones after losing the last two pregnancies.

‘I was overwhelmed with her response when she unwrapped the frame and read the text. I lost control and couldn’t stop crying.’

Kirri’s step-sister, retail assistant Sammie, who filmed the special moment, said: ‘I thought it was the most amazing thing to witness!

‘Sue is a very stubborn, tough woman so to see this soft, teddy bear side of her where her true colours could shine through was amazing!

‘I’ve never ever witnessed Sue become emotional but I could definitely tell that her husband meant the absolute world to her.

‘There wasn’t a single dry eye in the room, especially Kirri.

‘This meant the world, not only to Sue, but to Kirri, and you could tell by the way their emotional reactions bounced off each other.

‘We were all crying over it for ages! It was so amazing.

‘Kirri and Dylan both made the best decision.

‘Sue had done so much for their family and will always be known as “Aunty Sue” despite no real relation, and for Kirri and Dylan to honour that was so wholesome.’

Are Sharron & Rhonda Still Together After ‘Too Hot to Handle’? Let’s Investigate

How to Master the 'No Contact Rule' — the Ultimate Breakup Tool