A planetary scientist has slammed a man she met on a dating app after she told him she worked for NASA – and he asked if it was ‘was the receptionist’.

Dr Lauren McKeown, from Dublin, who previously worked at the NASA space centre in California, was asked by her Hinge match Mikey if she worked ‘as the receptionist’.

Lauren shared the cringeworthy exchange on Twitter, with Mikey going on to tell her it was a ‘joke’ because she looked ‘reasonably smart’.

Social media users were stunned by the conversation, with one posting: ‘Why on EARTH would you think this is a good way to flirt with someone?’ 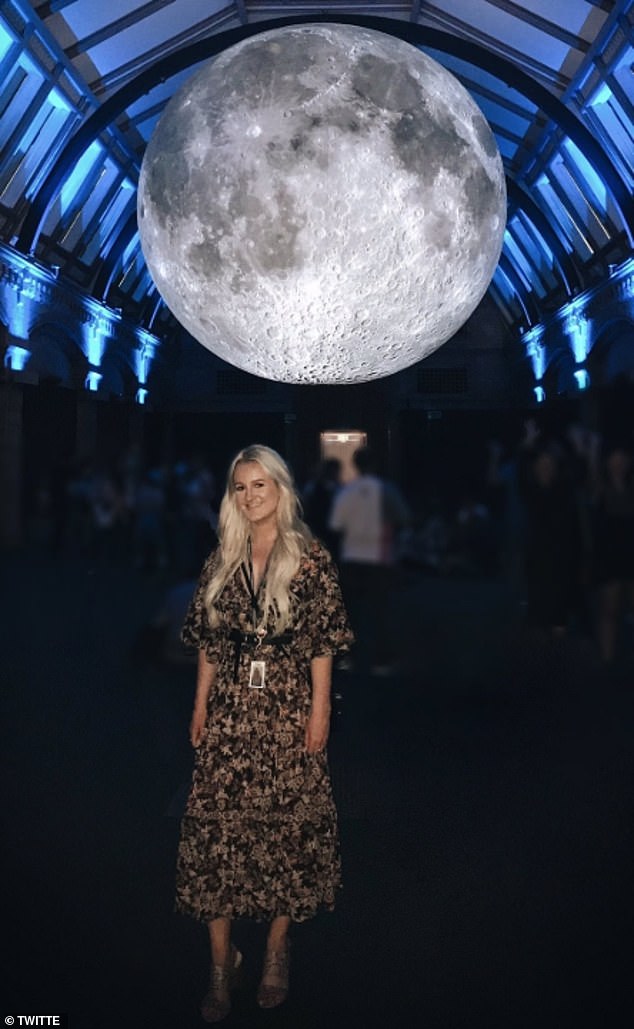 Planetary scientist Dr Lauren McKeown, from Dublin, slammed the man online  after he asked her if she worked as a receptionist for NASA 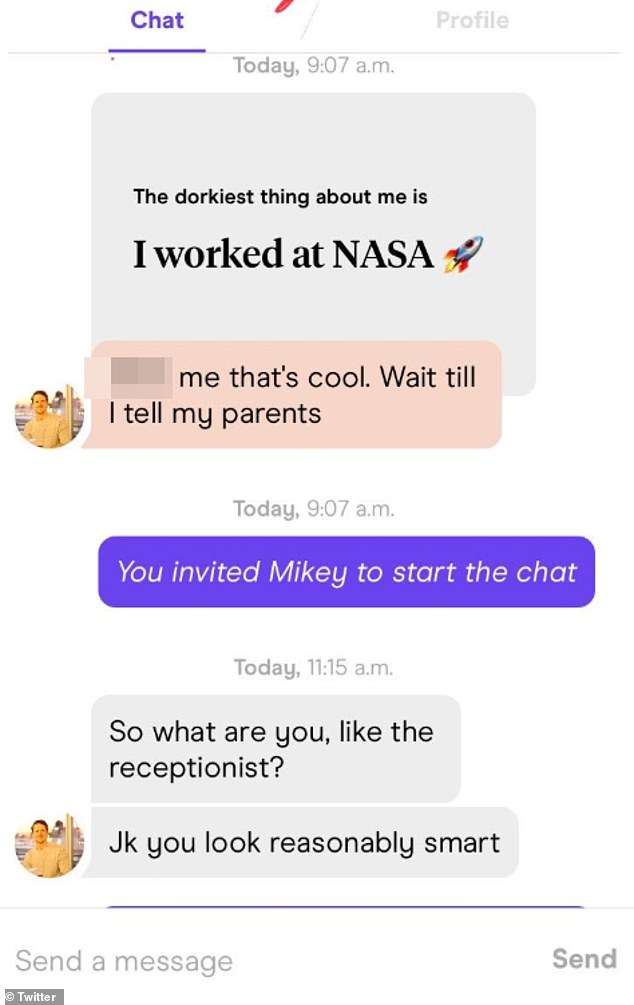 Lauren shared the exchange yesterday, with the conversation starting as Mikey responded to her claim she worked for NASA.

Having invited Mikey to start the chat, he added: ‘So what are you, like the receptionist? Joke, you look reasonably smart.’

Lauren was left stunned by the exchange, and promptly told him: ‘Smart enough to know at least that judging a woman’s intelligence based on her appearance might not be the best way to initiate conversation. 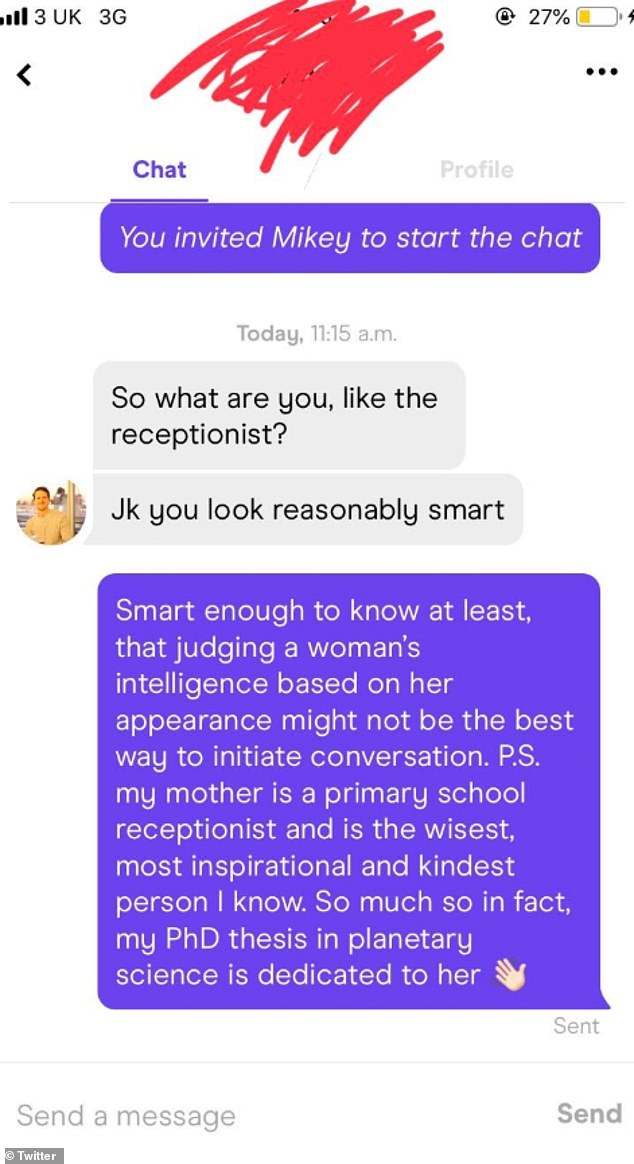 Lauren posted the exchange on Twitter in a post that quickly went viral, saying: ‘This is why I am single’

‘PS. my mother is a primary school receptionist and is the wisest, most inspirational, and kindest person I know.’

She added: ‘So much so in fact that my PHD thesis in planetary science is dedicated to her.’

She later explained the conversation continued, saying: ‘Worst part was he tried to pass it off as a joke and “I shouldn’t take myself too seriously.’

After the scientist shared the exchange online it quickly went viral, with other Twitter users stunned by Mikey’s  attempt at ‘flirting’. 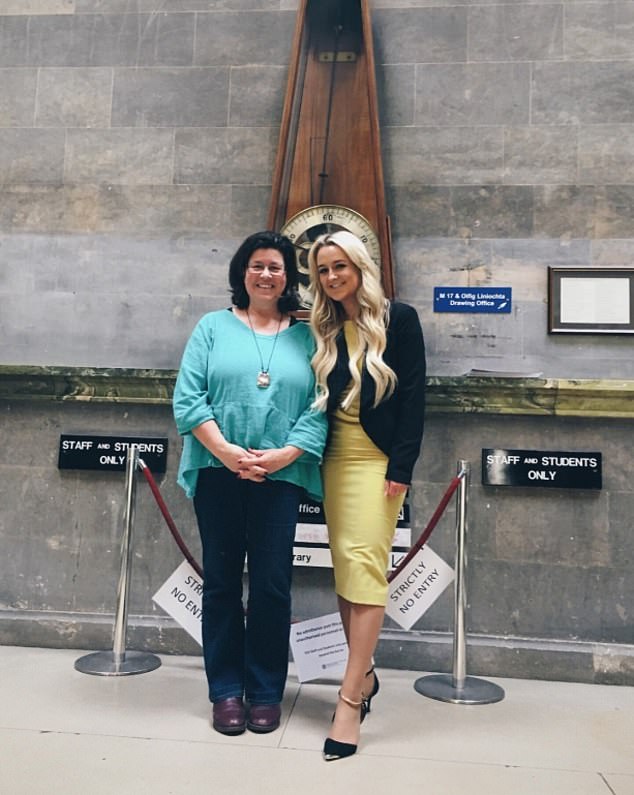 One wrote: ‘God, how depressing. It’s 2019 and there are still men who feel threatened by intelligent women!’

Another commented: ‘ I should think this is why HE’S single, actually!’

One posted: ‘When I started working at a new NASA facility, someone assumed I needed directions and I was pointed in the direction of the gift shop…’

Another added: ‘No, it’s why you’re smart. The right one will come along.’ 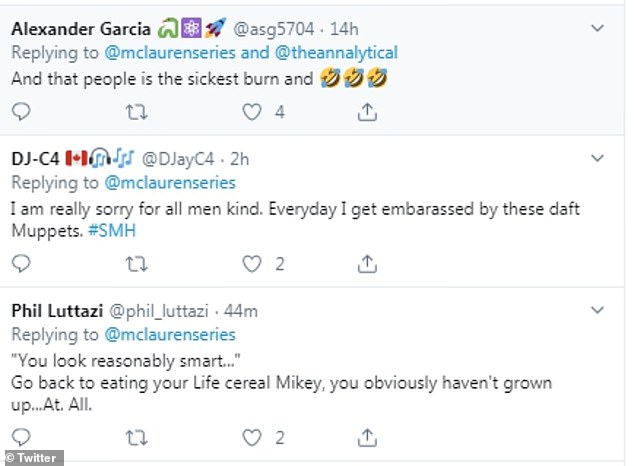 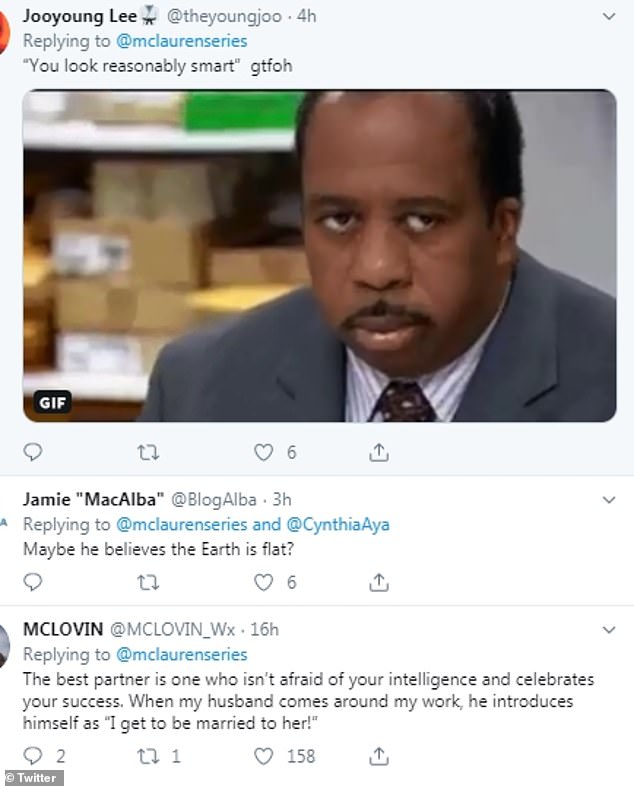 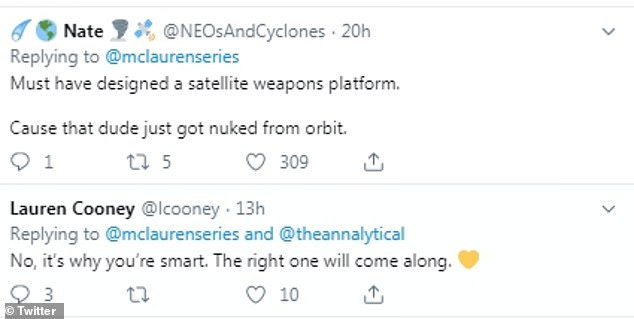 Twitter users were left horrified by the exchange, with many slamming Mikey over his ‘flirting’ technique

Another wrote: ‘I am really sorry for all men kind. Every day I get embarrassed by these daft muppets.’

‘Christ, reasonably smart…i.e. I deem you to have met my low estimation of maximum female intelligence,’ another commented.

‘It doesn’t sound like Mikey has realized that women are also human beings,’ another commented.