The 11-minute 40-second episode of Ask Me Another, a long-running radio quiz based on 20 Questions and hosted by Jack Davey, was filmed before a live audience at 2GB’s Macquarie Auditorium in Phillip Street, Sydney on Tuesday, June 30, 1953.

That was more than three years before Bruce Gyngell ushered in what is generally accepted as the birth of the medium in this country with the words “Good evening, and welcome to television” on September 16, 1956.

“It’s difficult to definitively say ‘this is the first Australian-made television game show pilot’,” says the NFSA’s Simon Smith. “But we believe it could be classed as such.”

The episode is very much a product of its time, with a trio of singers introducing the show by singing the sponsor’s theme song, followed by the host and panellists – Daily Mirror journalist Elizabeth Riddell, writer Keith Smith, French-born Australia’s Amateur Hour contestant Linda Lorene, and newspaper cartoonist Dan Russell – singing the show’s own theme song. And then we’re into the game itself.

Partway through, the sponsor – antacid brand Eno (which still exists) – gets an ad, then it’s back to Davey’s quick-witted patter and the panellists’ flailing attempts to answer. And in that at least, there are elements that could easily fit into an evening schedule on any free-to-air network today.

Experiments in transmission and early forms of broadcasting had been underway in Australia since the 1920s. But by 1953, the wave of interest was great enough that commercial players were vying for a piece of the action – and the filmed version of Davey’s radio show formed a key part of the bid by Macquarie Radio (now owned by Nine, owner of this masthead) to secure a licence. Interest was so strong, in fact, that a royal commission was set up to establish the ground rules and participants in this burgeoning field. 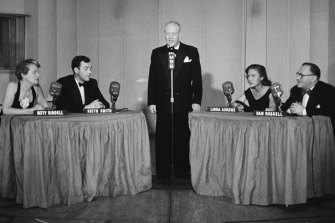 The show was recorded on Tuesday, edited on Wednesday and Thursday, and “privately screened to perhaps only five commissioners in Sydney, as part of Macquarie’s submission” on Friday, says Mr Smith.

Apart from that, the footage has never been seen publicly – until now.

It has, however, been part of the NFSA’s collection of 3.3 million or so items since the early 1990s, when the Canberra-based archive received it, unidentified, as part of a vast Cinesound Movietone film collection.

It was only a “chance discussion” with amateur television historian Chris Keating that alerted Mr Smith to the fact this treasure may lie in the archive’s vast trove.

Mr Keating, who works as a storeman and hosts a radio show on community radio station Plenty Valley FM, said he and Mr Smith were chatting about Jack Davey about a year ago, “when I mentioned in passing that he had done what was technically and probably the first television game show made in Australia”.

Why the qualification? “The easiest way to prove yourself wrong is to say ‘definitely’.”

Now digitised, the footage has finally been made available for anyone to view online. It joins a catalogue of more than 30 other quiz and game shows from Australia’s long infatuation with the format, spanning Pick a Box in the 1950s to Blankety Blanks in the 1970s to Rockwiz in the 2000s.

Kris Jenner Sets the Rumors of a Kylie-Travis Wedding Straight