Nike announced Thursday that it has settled its lawsuit against MSCHF, the company that collaborated with Lil Nas X to produce the controversial “Satan Shoes.” MSCHF will issue a voluntary recall of the shoes as a condition of the settlement, Nike said.

The “Satan Shoes” are modified versions of Nike’s Air Max 97, and each pair features a bronze pentagram charm, an inverted cross and one drop of human blood, according to the company. Even with a $1,018 price tag — a reference to the Bible passage Luke 10:18, which reads, “I saw Satan fall like lightning from heaven” — the 665 pairs of shoes sold out minutes after they were released in late March.

The company initially planned a giveaway for the 666th pair, but Nike filed a lawsuit soon after the shoes were released, alleging that they violated its trademark and damaged its brand. The company said the shoes were “likely to cause confusion and dilution and create an erroneous association between MSCHF’s products and Nike.”

“As a direct and proximate result of MSCHF’s wrongful acts, Nike has suffered, continues to suffer, and/or is likely to suffer damage to its trademarks, business reputation, and goodwill that money cannot compensate,” according to the lawsuit.

Days later, Nike obtained a temporary restraining order blocking MSCHF from fulfilling any additional orders. MSCHF’s lawyers said more than 600 orders had been filled by the time the restraining order was approved.

MSCHF will buy back both types of shoes at their original retail prices “in order to remove them from circulation,” Nike said.

The shoes, which were first released the day after Palm Sunday, were tied to the release of Lil Nas X’s new song “MONTERO (Call Me By Your Name).” In the song’s music video, the 21-year-old rapper attempts to seduce the devil after falling from the Garden of Eden. 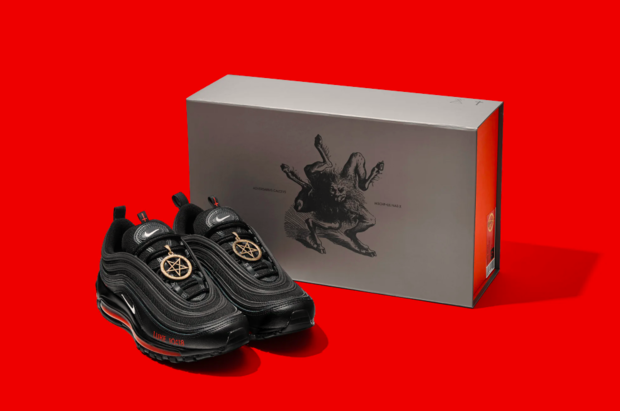 Lil Nas X, who was not named as a defendant in the lawsuit, released a series of tweets after the lawsuit was filed, including a “SpongeBob SquarePants” meme of a character begging for money with the caption “me after the Nike lawsuit.” The rapper has not commented publicly on the settlement.

An attorney for MSCHF said the company was “pleased” with the settlement, and that it believes it successfully made a statement about “the absurdity of the collaboration culture practiced by some brands, and about the perniciousness of intolerance,” and promoted equality and inclusion.

“The artistic messages MSCHF hoped to share with these shoes were also powerfully communicated through Lil Nas X’s music video ‘Montero (Call Me By Your Name),’ and were dramatically amplified by the Nike lawsuit, which brought extraordinary publicity to MSCHF and its works of art,” the attorney added.

“… Having already achieved its artistic purpose, MSCHF recognized that settlement was the best way to allow it to put this lawsuit behind it so that it could dedicate its time to new artistic and expressive projects,” the attorney said.

Sophie Lewis contributed to this report.

Woman disgusted after finding a ‘tooth’ inside her Subway sandwich