On Thursday, the company announced it would be rebranding the iconic quick-change toy to break away from traditional ideas about gender roles and family structures – celebrating the wedding and subsequent anniversaries of “Mr. and Mrs. Potato Head,” selling boxed sets of the couple and their offspring, “Spud” and “Yam.” (Yes, there was even a picket fence.) 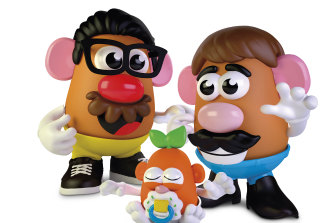 Mr. Potato Head is no longer a mister. Hasbro, the company that makes the potato-shaped plastic toy, is giving the spud a gender neutral new name: Potato Head. The change will appear on boxes this year. Credit:Hasbro via AP

Soon, Hasbro hopes the potato play can be a little more flexible and diverse, such as Mr. and Mr. Potato Head weddings or single spud-parent families. The move reflects a growing appetite for products that offer more flexibility around identity, from a surge in popularity in makeup for men to Mattel’s diversified Barbies and a boy “American Girl” doll. One in six adults in Generation Z in the US identifies as LGBT, according to a Gallup survey, providing some of the most detailed and up-to-date estimates yet on the size and makeup of the nation’s LGBT population.

“Culture has evolved,” Kimberly Boyd, who works on the Potato Head brand at Hasbro, told Fast Company. “Kids want to be able to represent their own experiences. The way the brand currently exists – with the “Mr.” and “Mrs.” – is limiting when it comes to both gender identity and family structure.”

The “sweet spot” for the Potato Head toy is about two or three years old, Boyd told Fast Company. Not just because of its silliness, but because of its capacity to serve as a blank slate where they can model their experiences. “This often takes the form of creating little potato families, because they’re learning what it means to be in a family.”

When the rebranded toy hits shelves in September, the accompanying pieces will be made from “plant-based plastic” and have less plastic packaging, Hasbro told investors Thursday, according to reporting from Bloomberg. A spokeswoman told Bloomberg the kit will include two plastic adult potatoes, one baby potato and 42 accessories. 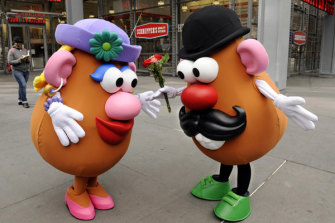 The news raised some ire on social media on Thursday, and may generate some flak in certain corners of conservative culture, but it’s not actually controversial said Neil Saunders, managing director of retail at GlobalData in New York.

“A potato doesn’t have a gender. And they’re not saying the toy can’t be male, female or anything else – they’re just allowing the child or consumer to determine that for themselves,” Saunders said in an email to The Washington Post. “The alternative would be to produce a whole variety of different products to cater for different genders – but that would be unwieldy in terms of costs and securing space in stores. So this is the simplest solution.”

The original Hasbro “Mr. Potato Head” cost just 98 cents, according to Fast Company, about $10 (A$12.70) in today’s currency. After the release of the original Mr. Potato Head commercial – which was the first televised ad directed at kids rather than adults – Hasbro netted more than $4 million (A$5.07 million) in sales in just a few months, according to the National Toy Hall of Fame. The next year, in 1953, Hasbro rolled out a “Mrs. Potato Head” and potato kids, “Spud” and “Yam.” Later, the company sold various sets with the whole family.

In 1992, Mr. Potato Head eschewed his couch potato status and “received a Presidential Sports Award from the President’s Council on Physical Fitness and Sports,” according to the Quad-City Times, which was presented by on the White House lawn.

After Mr. Potato Head appeared, voiced by comedian Don Rickles, in Pixar’s Toy Story in the 1990s, sales got another major boost, as did many other classic toys featured in the film, like slinky and Etch-a-Sketch, according to The Takeout.

George Lerner, a Brooklyn inventor, first conceived of Mr. Potato Head as a “funny face kit” that kids could stick onto potatoes or other vaguely head-shaped vegetables in 1949, according to ThoughtCo. The early iteration was a collection that included 28 hands, feet, eyes, mouths, hair and hats – potato-not-included. After selling the pieces as bonuses in cereal boxes, Lerner later sold the rights to the Rhode Island company Hassenfield Brothers, which would become Hasbro.

The original Mr. and Mrs. Potato Head will still be sold under the gender-neutral rebrand, Hasbro confirmed on Thursday in a tweet.

Hasbro did not immediately respond to a request for comment.

Get a little more outta life

Start your week with practical tips and expert advice to help you make the most of your personal health, relationships, fitness and nutrition. Sign up to our Live Well newsletter sent every Monday.