How to save money on chicken: Nutritionist shares how to cut up a whole chook from the butcher perfectly in under three minutes

A nutritionist has revealed how you can save money by butchering your own chicken at home – and the simple task takes just three minutes.

Jordan Pie, known as Jordan Pieface on Instagram, shared a video of her partner Roy carving up a raw chicken piece by piece on Tuesday.

In the caption the young New Zealand woman explained the 1.6 kilo bird cost her just  $23.99 – where buying each piece separately would have cost $36.80. 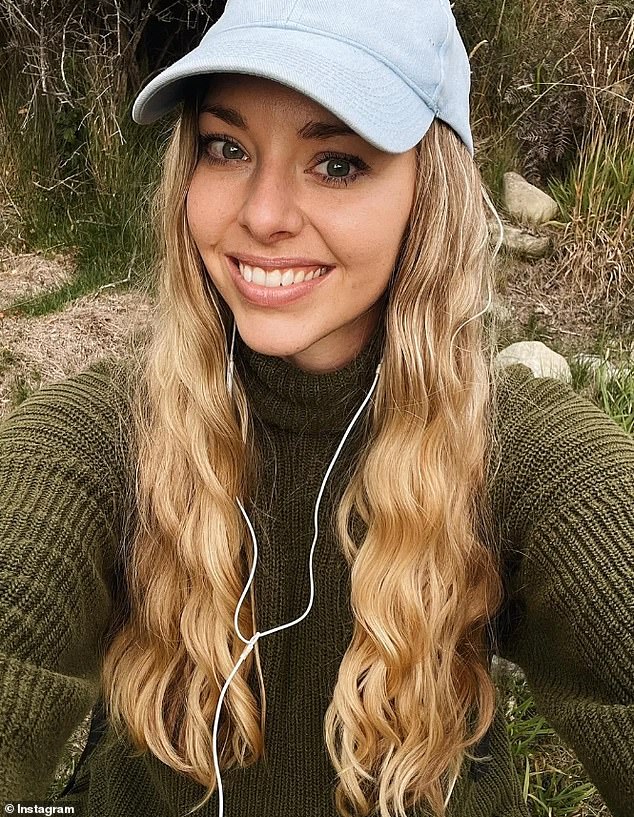 Jordan Pie, known as Jordan Pieface on Instagram, shared a video of her partner Roy carving up a raw chicken piece by piece on Tuesday 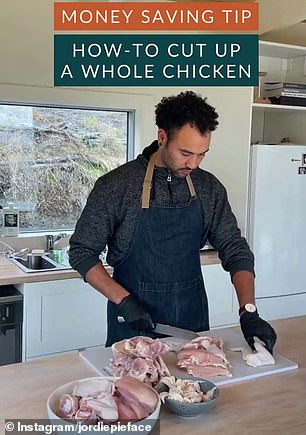 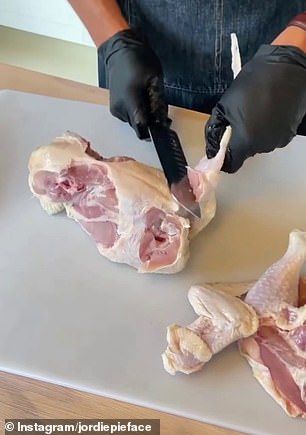 She explained taking care of the job at home also means you can limit your food wastage by using the whole animal.

The nutritionist even renders the chicken fat, makes treats from the skin and boils the bones for broth.

‘With a bit of practice, butchering a whole chook takes us less than three minutes,’ she said.

The video begins with Roy slicing off the legs before removing the skin and chopping the carcass in half.

He then trims the chicken breast away from the bone and packs each carefully dissected piece into reusable containers.

The  fatty tissue and skin is then fried off, with the rendered fat drained into a jar for cooking and the skin put to the side as a tasty snack. 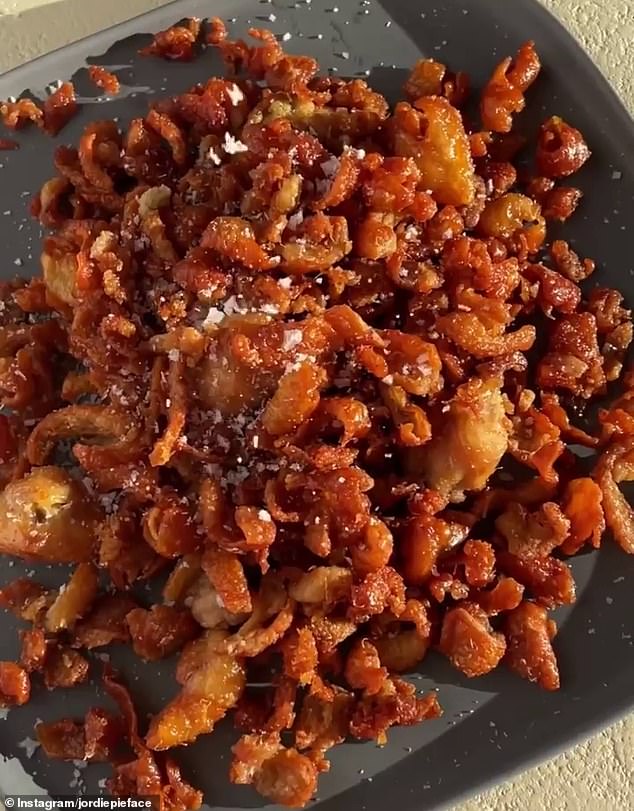 The fatty tissue and skin is then fried off, with the rendered fat drained into a jar for cooking and the skin put to the side as a tasty snack

‘From one whole chicken you will have;⁣⁣ two drumsticks⁣⁣, two thighs⁣, two wings⁣⁣, two large chicken boobies⁣⁣, one large chicken frame which you can save for bone broth or chicken soup⁣ and the skin and chicken schmaltz,’ she said.

The video was described as ‘mesmerising’ by many of the young woman’s 80,000 followers.

‘Why have I never thought about this? It is so clever,’ one woman said.

Some revealed they like to cut their own chickens up too – but don’t make the job look ‘quite as effortless’ as Roy.

How can I dissect a chicken at home?

Step 1: With chicken breast side up, pull each leg away from the body, then slice between the breast and the drumstick. Turn chicken on its side and bend each leg back until the thigh bone pops out of its socket. Cut through the joint to remove the leg completely.⁣⁣

Step 2: Pull each wing away from the body. Cut through the joint and remove the wings.⁣⁣

Step 3: Pull the chicken skin off and set this aside. Don’t throw it out.⁣

Step 4: To make the next step easier, lift up the chicken and cut downward through the rib cage and shoulder joints to separate the breast from the back. This helps to stabilise the frame when removing the chicken breasts.⁣⁣

Step 5: Carefully run your knife alongside the breast bone, making short scraping cuts as close to the bone as you can. Gently pull the breast meat away and cut the same way along the ribs to remove the breast completely. Repeat on the other side.⁣⁣

Step 6: Leave the maryland whole, or cut through the joint and you’ll have a drumstick and thigh⁣.⁣

To make the crispy skin treats and render the fat:

Simply chop the skin, then render in either a saucepan or in the oven. Once it’s golden brown and crispy, pour through a sieve and collect the golden schmaltz (chicken fat) and sprinkle the crispy chicken bits with salt and enjoy. 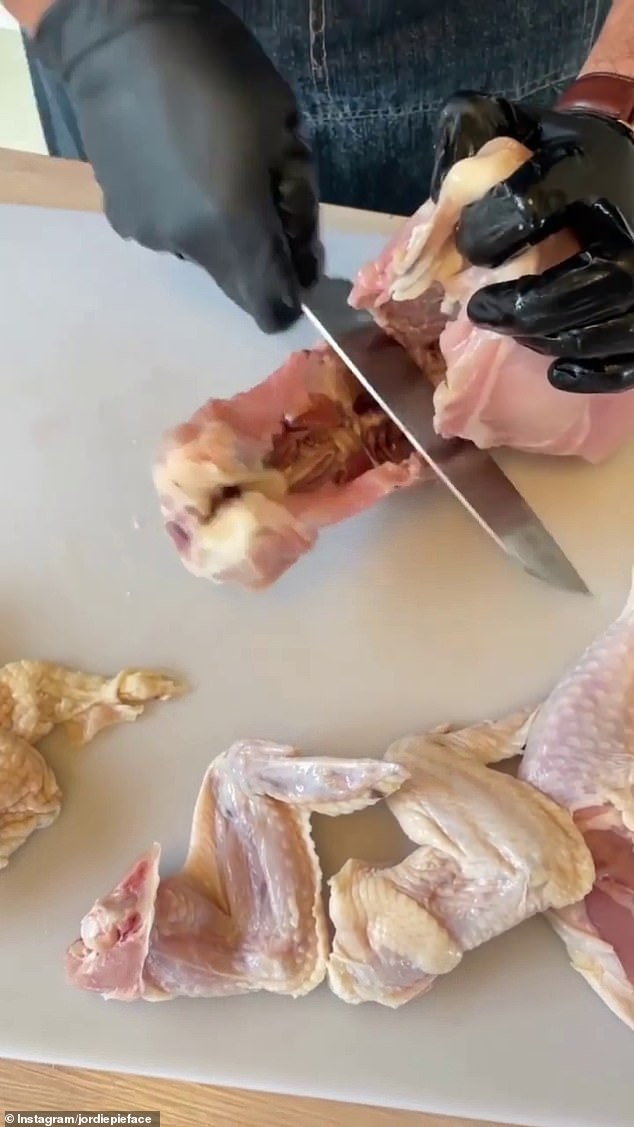 ‘So therapeutic to watch, although I’m not this professional, mine looks like I’ve cut it with a spoon sometimes,’ one woman said.

‘Well you wouldn’t want to see a video how I cut mine up.. its a mess no matter how perfect I try to be,’ added a second.

Jordan said her partner, who is a photographer, likes to sharpen his knives before butchering a chicken and will ‘often swap between two’.

While others decided the hack would be worth following up for the crispy chicken skin alone.

‘It is the best, most crunchiest, yummiest savoury snack,’ Jordan said in response.

‘Can confirm that the cooked chicken skin is beyond amazing!! I’ll buy a whole chicken for this reason only,’ another woman added.

If Your Partner Is Controlling, Here’s What To Do