‘It’s shocking to see so many untruths about yourself traded as fact’: Olivia Wilde hits back at Don’t Worry Darling scandals and gushes over leading lady Florence Pugh amid feud rumors – as she flashes her breast in VERY provocative ELLE cover shoot

Olivia Wilde has addressed the furious scandals and controversies surrounding her new movie Don’t Worry Darling – insisting that much of what has been alleged about on-set feuds and fall-outs are ‘untruths’, while lamenting the fact that her ‘life has been torn to shreds’ by the public as a result of all the scrutiny over the flick.

The 38-year-old spoke out about the brutal backlash she has faced over the movie in a new interview with ELLE’s Women in Hollywood issue, while posing for a very provocative cover shoot that sees her baring one breast in a very revealing black dress.

Don’t Worry Darling – which Wilde directs and stars in alongside her boyfriend Harry Styles and leading lady Florence Pugh – was only released a few weeks ago, yet it has been one of the most talked-about movies in Hollywood for months, thanks, at least in part, to the public’s fascination over Wilde’s relationship with Styles, as well as rumors of a bitter on-set feud between her and Pugh, 26.

Further fuel was added to the flames of controversy when Wilde became embroiled in a public spat with Shia LaBeouf – whom she claimed she let go from the movie’s cast over concerns about his behavior, while he insisted that he quit the project, even sharing messages exchanged between the two as evidence to back up his side of the story.

Although Wilde did not address any of the scandals specifically during her interview with ELLE, she slammed the number of ‘untruths’ about her life that have been shared in recent months, while seemingly trying to shut down rumors of a rift with Pugh by gushing over her leading lady’s acting skills. 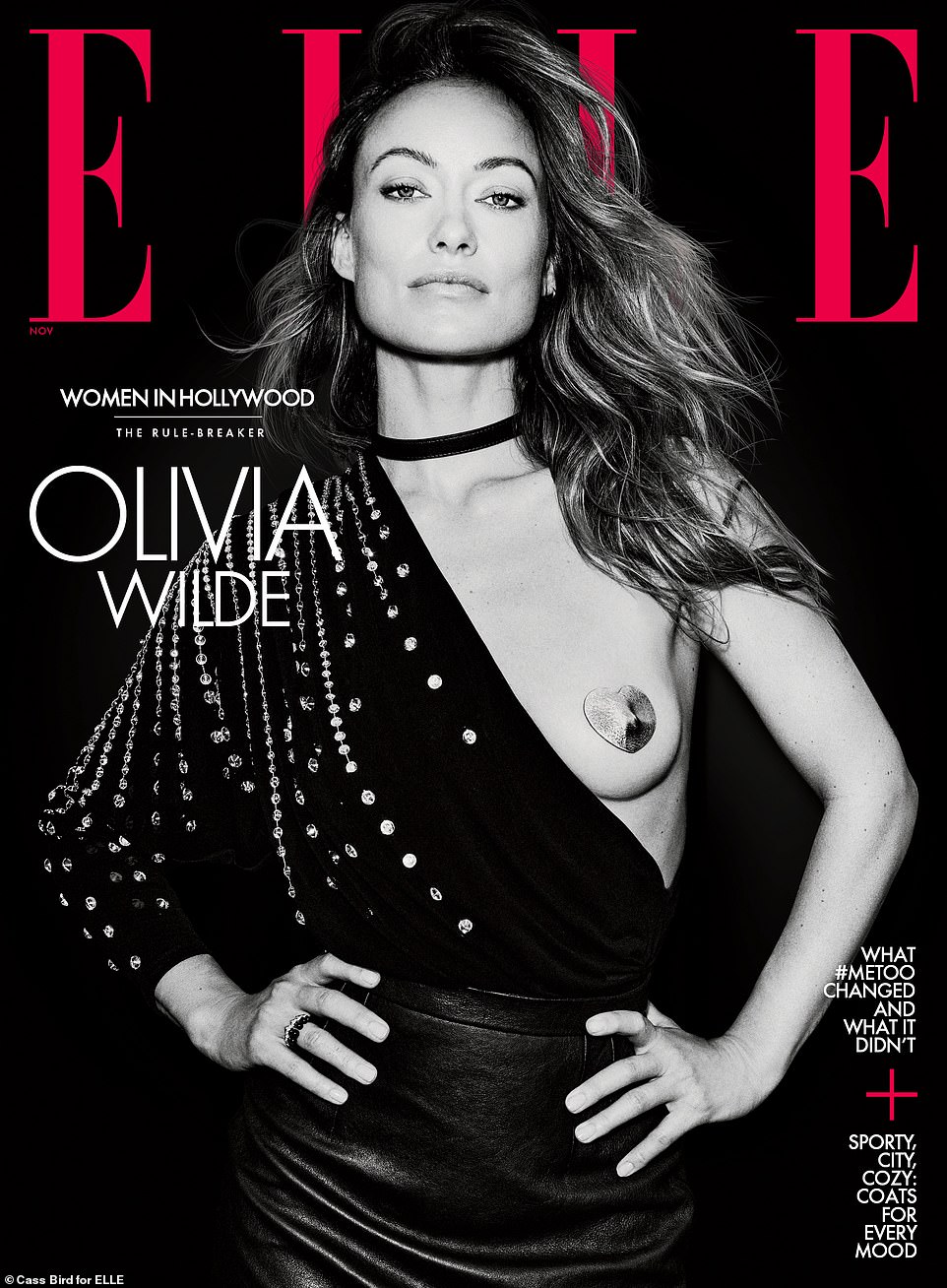 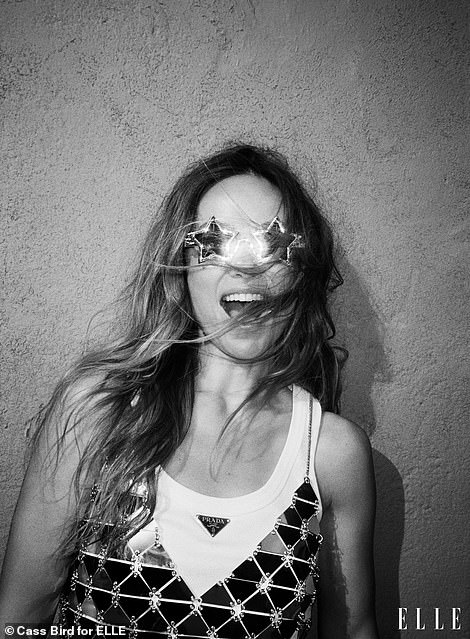 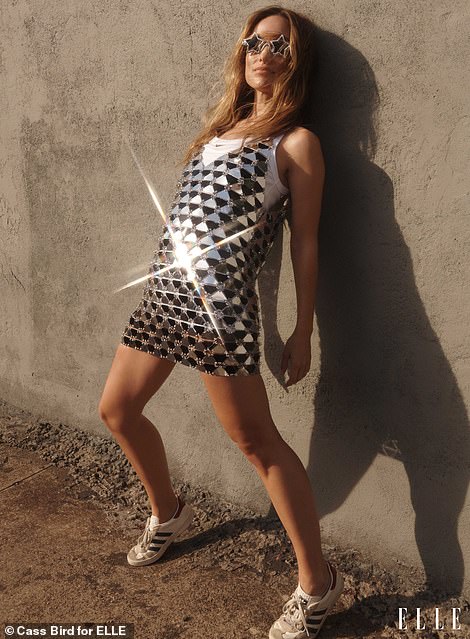 The 38-year-old’s new directorial effort – which she also stars in – has been the source of furious speculation for months. There have been rumors of a feud between Wilde and leading lady Florence Pugh, and furious speculation about Wilde’s romance with Harry Styles, who stars in the film 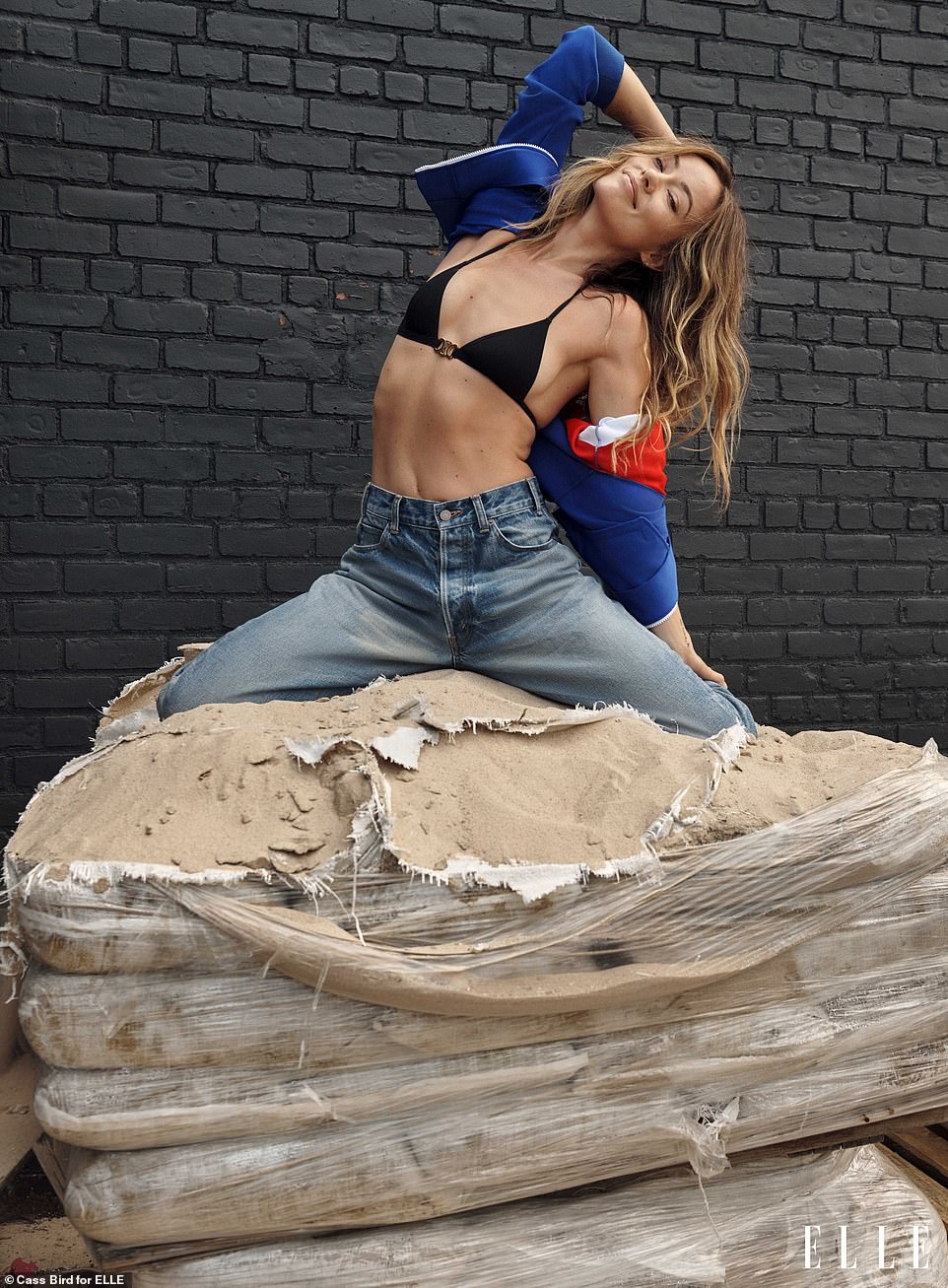 Speaking about the controversy surrounding her movie, Wilde simply said it has been ‘shocking to see so many untruths about [herself] traded as fact’, while shutting down rumors of a rift with Pugh, 26, by gushing about her acting talents

‘It is shocking to see so many untruths about yourself traded as fact,’ she told the publication of the controversy surrounding her movie – and her personal life.

She continued by referencing a comment made by Pugh, noting that being an actress and director doesn’t mean that she ‘signed up for a reality show’ – and lamenting the fact that her life has been ‘torn to shreds by a pack of wolves’. 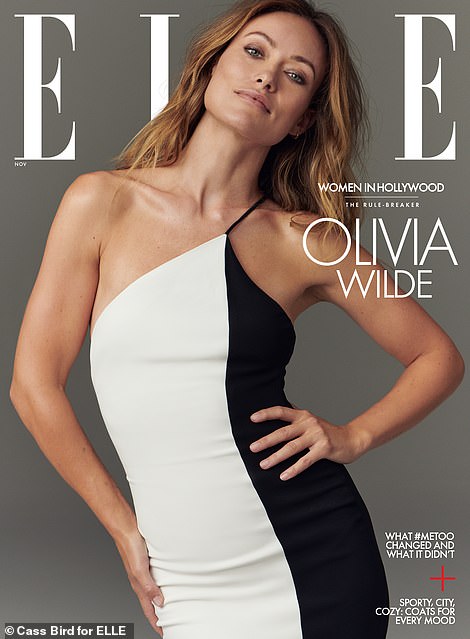 Wilde insisted that she ‘didn’t sign up for a reality show’ just by working in an industry that comes with much public scrutiny and speculation, adding: ‘It’s as though the general public feels… you somehow have accepted that your life will be torn to shreds by a pack of wolves’

‘Florence had a really wise comment that we didn’t sign up for a reality show,’ she said. ‘And I love that she put it that way, because it’s as though the general public feels that if you are making something that you’re selling to the public, you somehow have accepted that your life will be torn to shreds by a pack of wolves.

‘No, that’s actually not part of the job description. Never was.’

As for the rumors of a rift between herself and Pugh, Wilde didn’t specifically deny the speculation, however she heaped praise on the movie’s starlet, saying of the British-born actress: ‘She’s so generous in her acting in every scene. She makes everyone around her better.’

Claims about an on-set feud between Wilde and Pugh have continued to dog the movie’s release, with sources suggesting that 26-year-old Pugh felt ‘uncomfortable’ about the director’s on-set relationship with Styles.

‘Flo seeing Olivia and Harry all over each other on set did not go down well as Olivia was still with Jason when she first hooked up with Harry,’ an insider claimed to Page Six.

‘Jason and the kids visited Olivia on set at the beginning a few times, so I think this all made people feel a little uncomfortable.’

Pugh then admitted in an interview with Harper’s Bazaar that she was unhappy with the way in which the movie’s trailer highlighted the sex scenes in the flick, saying that she felt as though the clip had ‘reduced’ Don’t Worry Darling to the most graphic aspects.

‘When it’s reduced to your sex scenes, or to watch the most famous man in the world go down on someone, it’s not why we do it. It’s not why I’m in this industry,’ she said.

‘As a crew, we’ve avoided addressing the absurd gossip surrounding the movie we’re so proud of, but feel the need to correct the anonymous “sources” quoted in a recent article.

Any allegations about unprofessional behavior on the set of Don’t Worry Darling are completely false. Olivia is an incredible leader and director who was present with and involved in every aspect of production. She ran this set with class and respect for everyone involved. There was never a screaming match between our director and anyone, let alone a member of our cast.

We are happy to put our names on this, as real people who worked on the film, and who have witnessed and benefitted from the collaborative and safe space Olivia creates as a director and leader. We’re also thrilled that the movie is in theaters this weekend. We can’t wait for you to see it on the big screen.’

Speaking about the controversy over the movie’s graphic sex scenes, Wilde told ELLE that she agrees with Pugh’s opinion that too much attention has been given to the sexual content in Don’t Worry Darling, insisting that she was ‘happy when Florence pointed this out’.

‘Florence very wisely pointed out that a lot of attention has been given to the sex scenes. And I think she’s so right. I completely agree with her that it’s overshadowing everything else that the movie’s about,’ she said, adding: ‘When Florence pointed that out that this film is so much bigger and better than just the sex scenes, I was so happy that she said that because I feel the same way.’

Rumors about behind-the-scenes drama on the set of Don’t Worry Darling became the source of so much public interest and speculation that the cast and crew issued an official statement denying all suggestion of a feud between Wilde and Pugh as ‘absurd’ and ‘completely false’.

A total of 40 individuals, including producer Miri Yoon, came forward to release a statement obtained by DailyMail.com with the ‘need to correct’ the alleged claims, calling them ‘absurd’ and ‘completely false.’

‘As a crew, we’ve avoided addressing the absurd gossip surrounding the movie we’re so proud of, but feel the need to correct the anonymous ‘sources’ quoted in a recent article,’ the statement began.

‘Any allegations about unprofessional behavior on the set of are completely false,’ they further stated.

However, the speculation about a feud between Pugh and Wilde are certainly not the only specter of scandal to have hovered over the movie for the past few months.

The first controversy arose after Styles and Wilde went public with their relationship when they were seen holding hands at a wedding in California in January 2021, following weeks of speculation that the pair were an item.

Eyebrows were raised, however, over just how quickly Wilde had moved on from her ex-fiancé, Ted Lasso star Jason Sudeikis, whom she split from in November 2020.

Wilde recently hit out at claims that there was any crossover in her relationships, telling Vanity Fair magazine: ‘The complete horses**t idea that I left Jason for Harry is completely inaccurate.

‘Like any relationship that ends, it doesn’t end overnight. Unfortunately, Jason and I had a very bumpy road, and we officially dissolved the relationship towards the beginning of the pandemic.’ 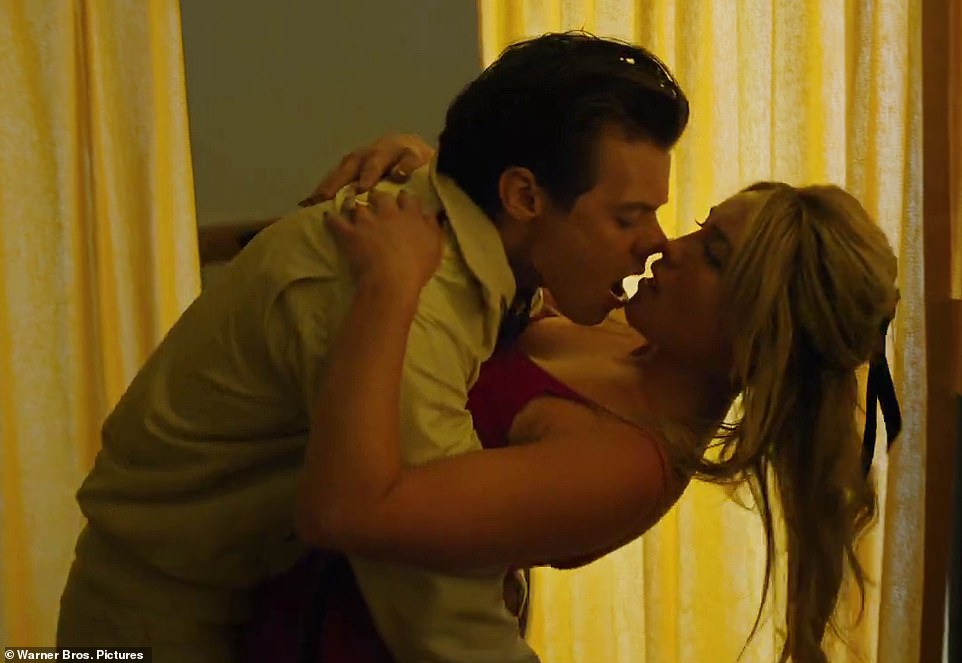 There have also been multiple rumors about a feud between Wilde and her leading lady Pugh, with reports suggesting that 26-year-old Pugh was ‘uncomfortable’ with the director’s on-set relationship with Styles 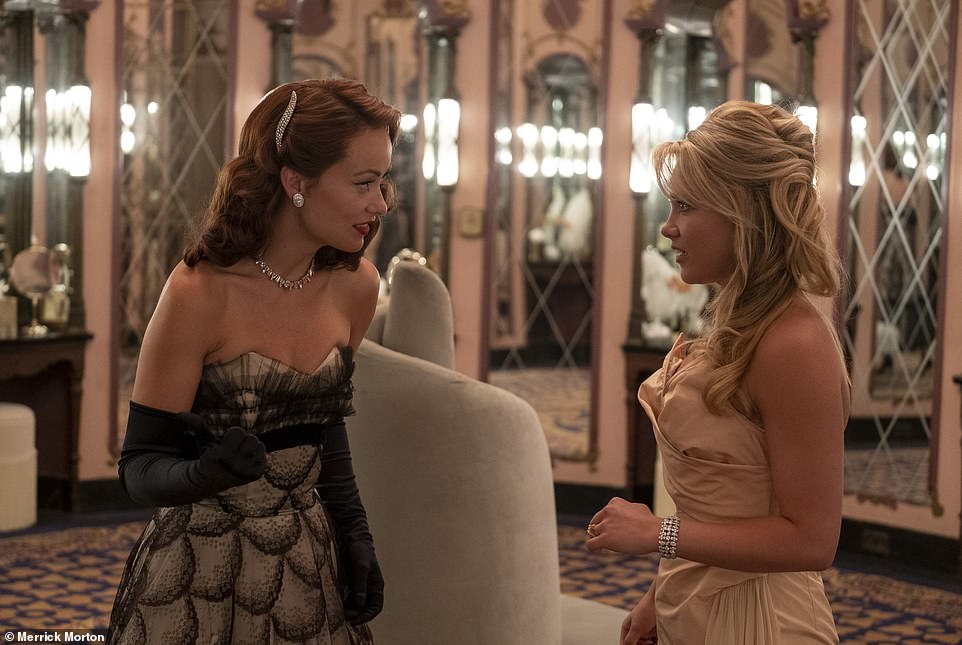 Although Wilde did not specifically deny rumors of a rift with Pugh (seen together in Don’t Worry Darling), she gushed over the starlet’s acting abilities, saying: ‘She’s so generous in her acting in every scene. She makes everyone around her better’

That split became the source of more scandal when Wilde was served with legal papers for the pair’s custody battle over their two kids, Otis, eight, and Daisy, five, in front of hundreds of spectators while doing a talk at CinemaCon in Las Vegas in April, a move that she later slammed as ‘aggressive’ and ‘threatening’.

Of her relationship with her ex Sudeikis, Wilde told ELLE that she ‘shares custody’ with the actor, and that if she isn’t pictured with her children, it is not because she has ‘abandoned’ them, but rather because she goes to great lengths to ‘protect her kids from being seen’ by photographers.

Wilde did not comment on her public spat with LaBeouf, although she told the publication that she has a strict ‘no a**holes policy’ on-set, something that comes from ‘seeing so many f***ing a**holes on set’ over the years.

Wilde became embroiled in a bitter war of words with LaBeouf, after claiming that she had fired him from the project over concerns about his ‘combative energy’, claiming that she made the decision out of a desire to ‘protect’ leading lady Pugh.

However, LaBeouf hit back at the director’s claims, insisting that he had actually stepped down from the movie because he didn’t feel he’d had enough time to rehearse with the rest of the cast – while sharing text conversations with Wilde that seemed to serve as evidence for his side of the argument.

To add insult to injury, all of the scandal surrounding the movie appears to have done little to help it win over the critics; Don’t Worry Darling currently has a dismal 34 per cent critic approval rating (out of 64 reviews) on Rotten Tomatoes.

The movie tells the story of housewife Alice, played by Pugh, whose husband Jack, played by Styles, moves them into a utopian community for his new company.

Alice then starts worrying that her husband and his company are hiding terrible secrets as her life is turned upside down.

Woman shares the photo that revealed her mother's secret baby