Australia is working with Lebanese authorities to find out whether any more Australians have been injured or killed in a massive explosion that rocked the city of Beirut.

At least one Australian is dead and the Australian embassy – which is reasonably close to the blast site – is significantly damaged with about 95 per cent of its windows blown out. 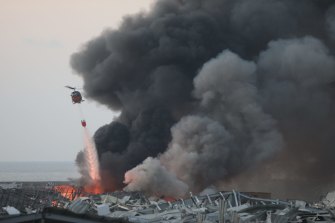 A helicopter drops water following a large explosion at the Port of Beirut.Credit:Bloomberg

A number of staff members at the Australian embassy have received glass injuries from the smashed windows, but no employee is believed to be seriously injured.

Hundreds of people are feared dead and at least 3700 have been injured following the explosion, which has destroyed buildings kilometres away from the blast site.

Officials within the Department of Foreign Affairs and Trade are now trying to track down the whereabouts of the thousands of Australians believed to be in Lebanon. There are usually around 20,000 Australians – including dual citizens – in Lebanon at one time, but this number may have been affected by the coronavirus pandemic.

Australia's ambassador to Lebanon, Rebekah Grindlay, said there were the "darkest of clouds over Beiruit tonight". 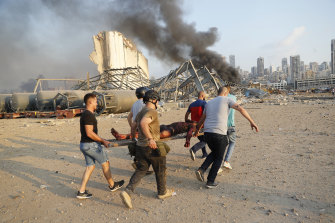 Civilians carry a person at the explosion scene that hit the seaport.Credit:AP

"The size of this event, the size of the explosion and its impact, is going to have caused a very significant number of fatalities.

"The Australian embassy has been considerably impacted – we have, I'm advised by the ambassador, about 95 per cent of our windows blown out by the impact. A number of staff have received glass injuries and are being looked after."

The US Embassy in Beirut is urging people in the area of the explosion to "stay indoors and wear masks if available" because of concerns over toxic gases released from the blast.

"There are reports of toxic gases released in the explosion so all in the area should stay indoors and wear masks if available," the embassy warned.

Prime Minister Scott Morrison said embassy staff were working to determine how many others had been injured.

"You can see from the image of the blast it is just absolutely devastating," Mr Morrison told Channel Nine's Today program.

"But beyond that…. there are hundreds of thousands of Australians who have Lebanese descent and
they will be concerned about family members."

Beirut Governor Marwan Abboud said the capital was a disaster area, with the damage "enormous".

"This reminds me of what happened in Japan, to Hiroshima and Nagasaki," he said.

""I've never seen damage of this size and width, and so catastrophic. This is a national catastrophe. This is a problem for Lebanon, and we don’t know how we’re going to get out of it."