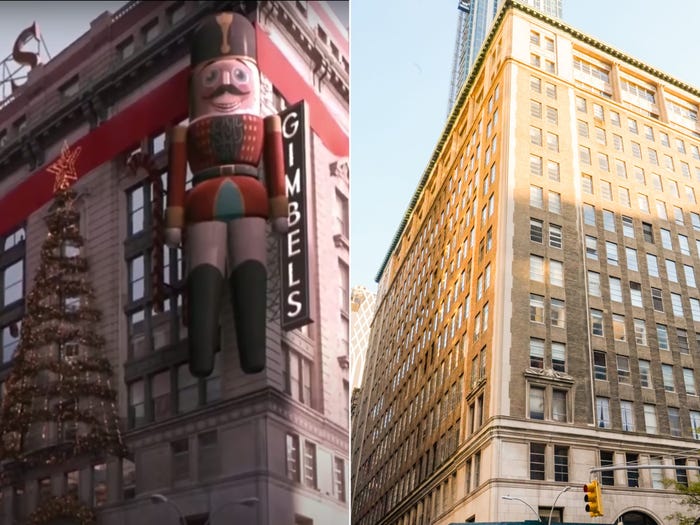 Warning: Spoilers ahead for the movie "Elf."

Every December, my brother and I watch "Elf" together. Then, we spend the whole year referencing its many hilarious bits to one another whenever they are relevant.

Now that I live in New York City, where my favorite holiday movie was filmed, I've passed through many of the film's iconic locations from Rockefeller Center to Central Park.

But while you can visit some of the sites from the movie, I've found that they don't all look like they do in the film. 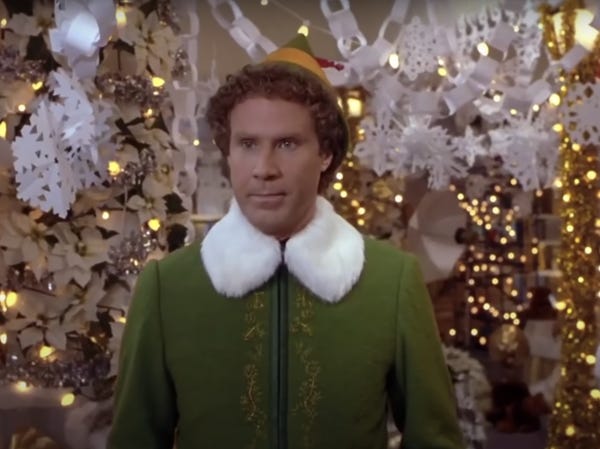 The 2003 film stars Will Ferrell as Buddy, an adult who grew up in the North Pole among Santa and elves. Buddy thinks he's an elf too until he leaves the North Pole to find his human father, Walter Hobbs, played by James Caan.

Buddy finds his father, who is initially reluctant to care for him, in New York City. While Buddy explores the city, gets to know his family, and falls in love with a lady, Santa struggles to prepare for Christmas Eve. His sleigh runs primarily on Christmas spirit, a source of fuel that the world is running low on.

Santa ends up crashing in Central Park while trying to deliver gifts, and Buddy gets the chance to act as his elf by helping him with the sleigh. Meanwhile, Buddy's new loved ones help Santa by bringing the Christmas spirit to Central Park through song. And together, they all save Christmas.

I live in New York City, and I've been to the film's many iconic locations. 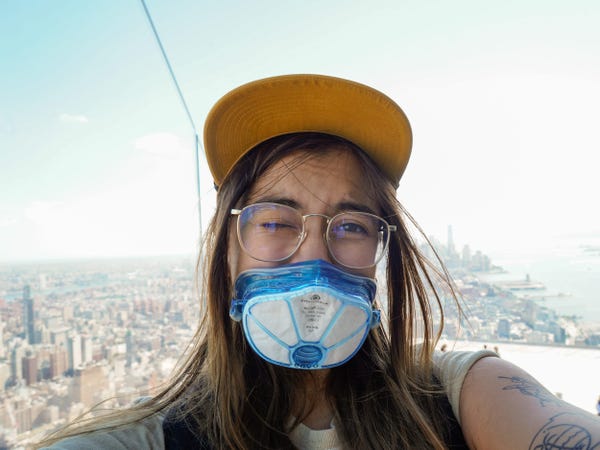 It also features other iconic locations like Rockefeller Center, and seemingly random ones, like the 23rd Street subway entrance east of Broadway.

Iconic spots and unforgettable moments in the film were shot in the middle of Manhattan, from the Flatiron Building to Central Park. 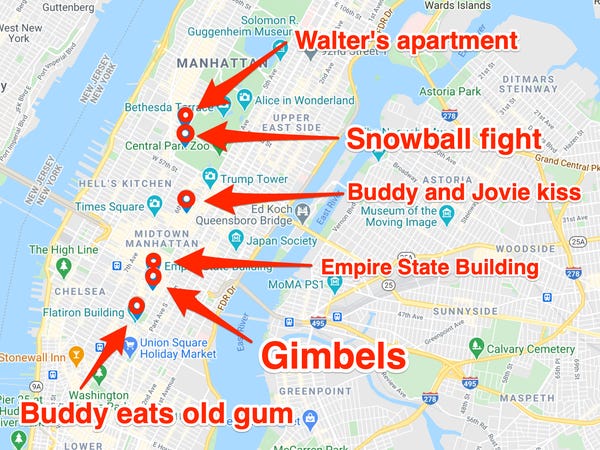 The film is depicted in Manhattan, one of New York City's five boroughs.

When Buddy gets to New York, he finds his father at the Empire State Building. 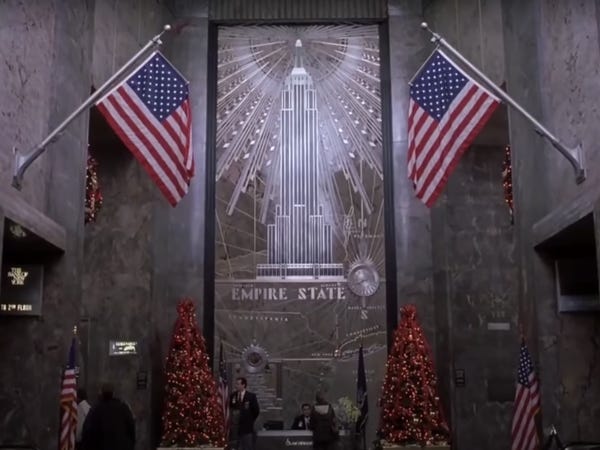 In the movie, Walter Hobbs works for a publishing company inside the Empire State Building.

The real-life lobby is pretty much identical, except there aren't always Christmas trees inside. 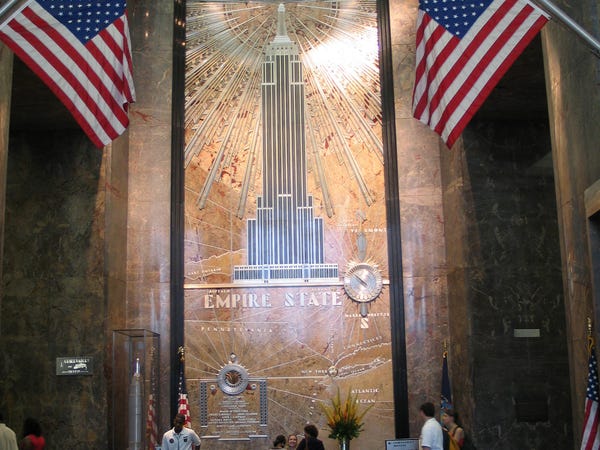 The lobby has the same mural in real life as it does in the film.

Just a couple blocks away from the Empire State Building is the building that was used as the exterior of Gimbels. 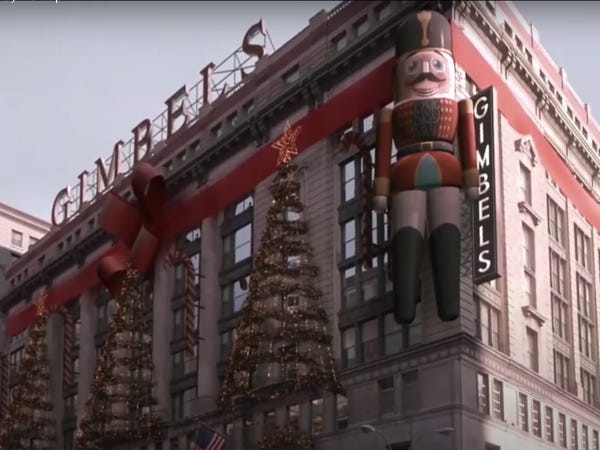 Gimbels, the store where Buddy meets his love interest, Jovie (played by Zooey Deschanel) used to be a real department store in Manhattan's Herald Square.

The store opened in 1910, becoming a competitor to the nearby Macy's flagship store (which opened in 1902), according to the Chicago Tribune. That rivalry came to an end when Gimbels closed in 1986, The New York Times reported.

In real life, the Textile Building is stripped of the Gimbels logo and holiday decor. 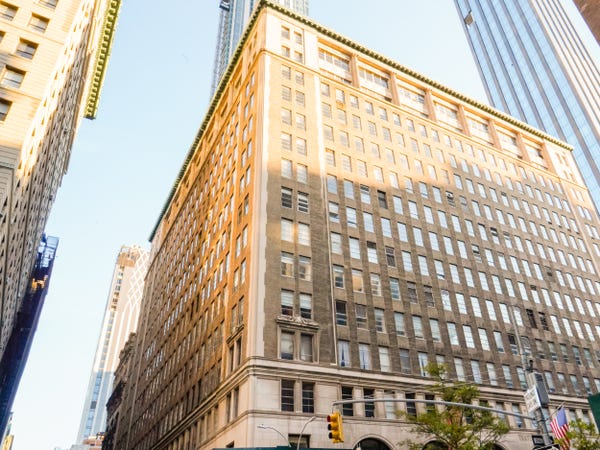 Manhattan's Textile Building was used as the exterior shot for Gimbels in the movie, according to the IMDb page for "Elf." CGI was used to transform the building's facade into a Christmas wonderland for the film, its IMDb page says.

It takes about seven minutes to walk from the Textile Building to the subway entrance where Buddy ate stale globs of gum he picked from beneath the railing. 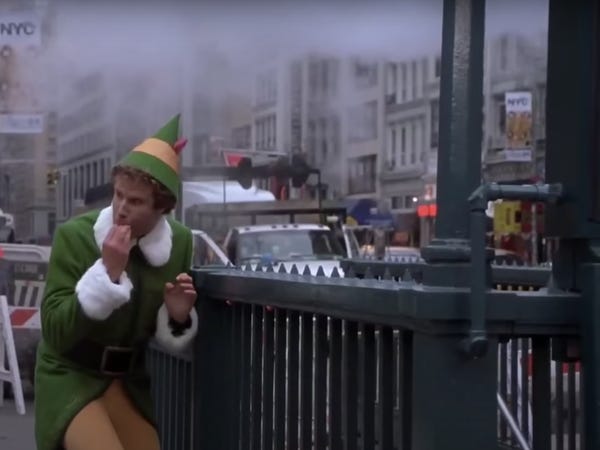 Although Santa told him not to, Buddy can't resist the sweet temptation of chewed gum he finds beneath a subway entrance railing at East 23rd Street. Buddy eats all kinds of sugary foods throughout the movie thanks to his sweet tooth.

In real life, it's the uptown and Queens entrance to the East 23rd Street subway station next to Broadway, and it looks just like it does in the film, minus the gum. Yes, I checked. 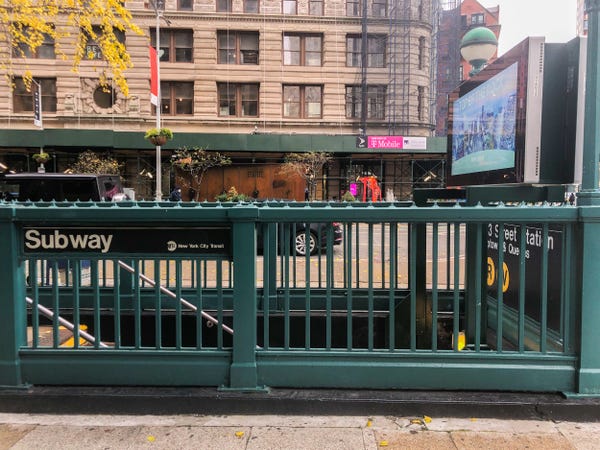 I'm thrilled to report that I found no gum underneath this particular railing. 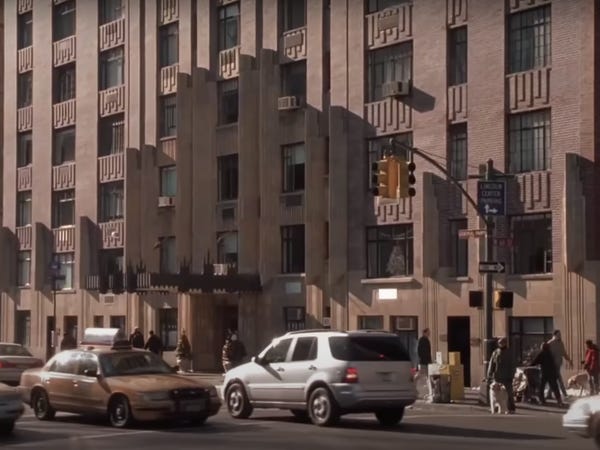 Walter Hobbs lives in 55 Central Park West with his wife Emily, played by Mary Steenburgen, and his son Michael, played by Daniel Tay. Buddy moves in with them.

Unlike Gimbels, this building looks just like it does in the film in real life. 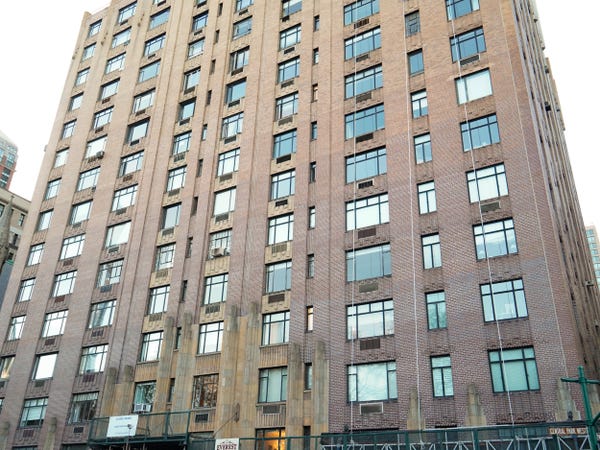 The building was also Spook Central in the film "Ghostbusters," where the Ghostbusters' first client lived.

Central Park is across the street from the apartment building. The park is massive, but the bridge featured in the scene of the snowball fight is very close by. 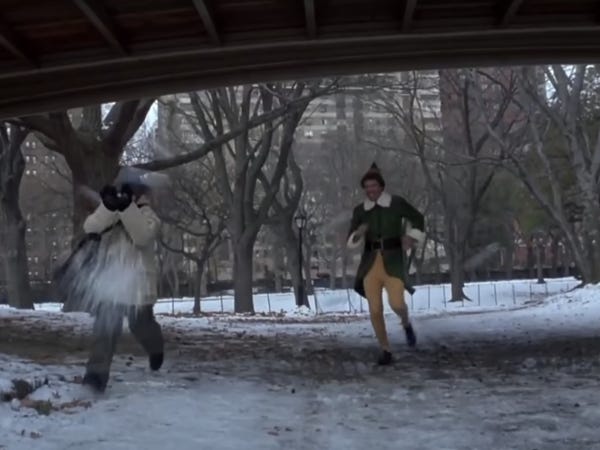 Buddy and Michael bond through a snowball fight as they charge underneath a bridge. It was the Pine Bank Bridge, according to Movie-Locations.com. The bridge is in Central Park West next to Umpire Rock.

Aside from the snow, this area looks the same as it does in the film. 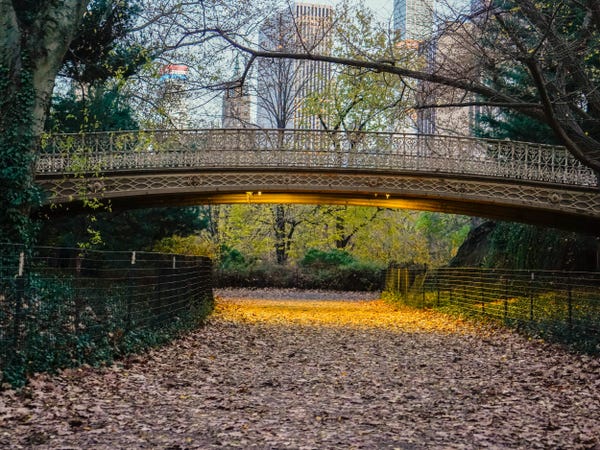 There are many arches and bridges in Central Park West, but I found this to be the prettiest one in the area. It's the one I'd pick to use in a film.

A couple miles south of Central Park West, Rockefeller Center's skating rink is where Buddy and his love interest Jovie kiss for the first time. 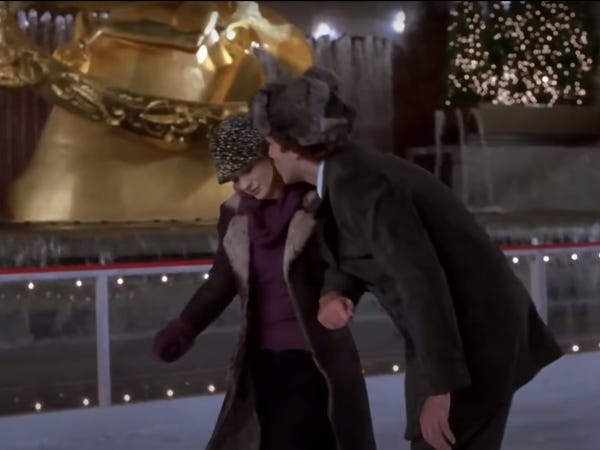 Buddy has a romantic evening with Jovie where they explore New York City's Christmas decor in department store windows and try some of Buddy's favorite activities, like running around inside revolving doors. They end up at the ice skating rink at Rockefeller Center.

The scene looked similar in 2019 around Christmastime, but the rink appeared less crowded in the movie. 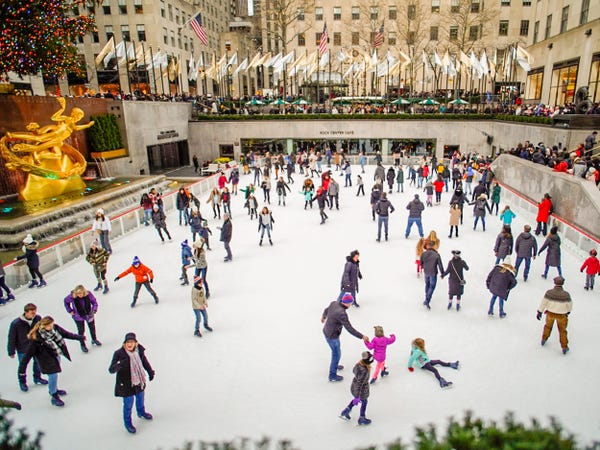 In reality, visiting Rockefeller Center is an ordeal. Without a VIP ticket, massive lines can take hours. I've never skated the rink, but every time I've gone to the area in December, it has been incredibly crowded, making it less romantic than it appears in the film.

Aside from the crowds and CGI additions, all the iconic locations from the 2003 film hold up in modern-day New York City. 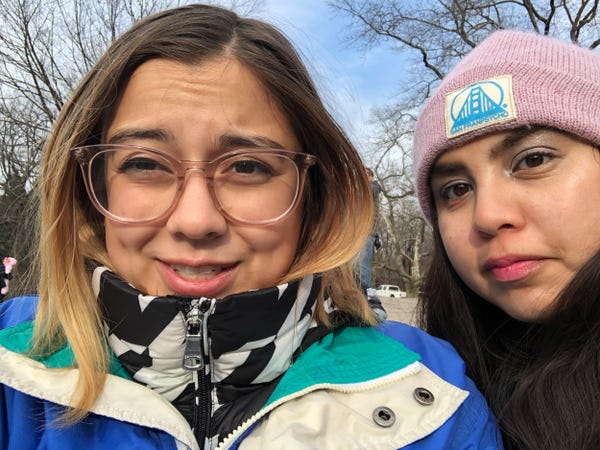 I'll have to take my brother on this "Elf" tour of New York City next time he visits.

EMM Reveals The ‘Pain’ She Went Through For Her Acrobatic ‘Fall’ Visual: ‘Blood Rushed To My Face’