Home » Lifestyle » Prince Harry is greeted by children in London

Practice for parenthood! Prince Harry proves he’s a natural with children as he jokes with pupils and meets their school dog on a visit to a tree- planting project

He’s weeks away from becoming a father and today Prince Harry had the chance to get in a bit of parenting practice as he bonded with youngsters on a visit to a school tree-planting project.

Showing that he’s already a natural at the ‘active listening’ techinque, Harry was seen crouching down to a little girl’s eye level and leaning in as he shook her hand at St Vincent’s Catholic Primary School in Acton, west London.

Year 5 pupils from the school are taking part in a tree-planting project in support of the Queen’s Commonweath Canopy initiative, together with the Woodland Trust.

During the visit Harry also stroked a fluffy white dog being held by one of the young boys, but reminded the pup who was boss by instructing it to be quiet with a waggle of the finger. 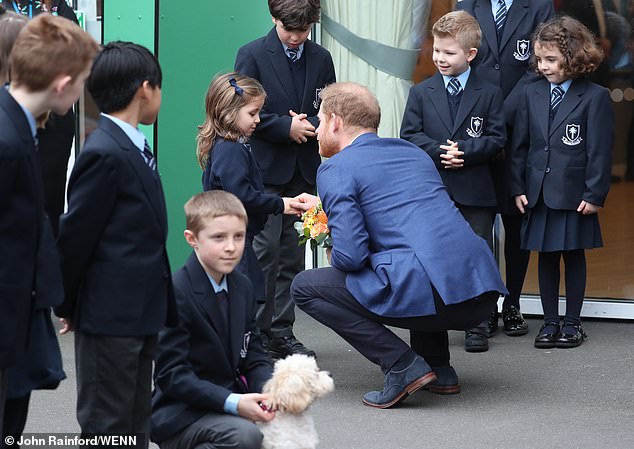 A little girl hand the Duke of Sussex a bunch of flowers and he shakes her hand during their meeting today. Prince Harry will plant his own tree with the Year 5 pupils at the school 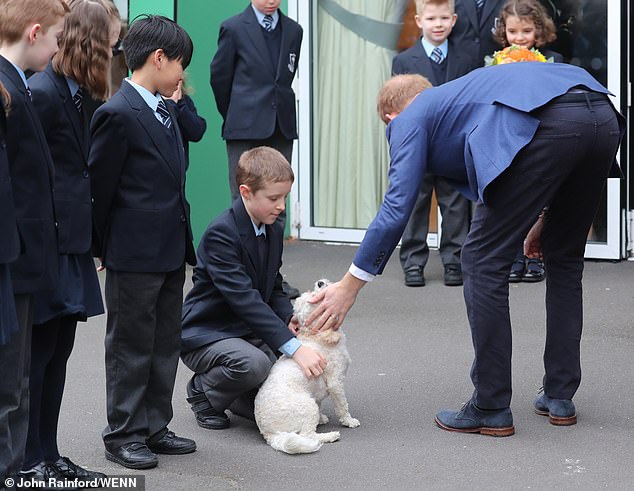 The Prince pauses to stroke a teacher’s dog, believed to be called Winnie, while visiting the schoolchildren in London this morning 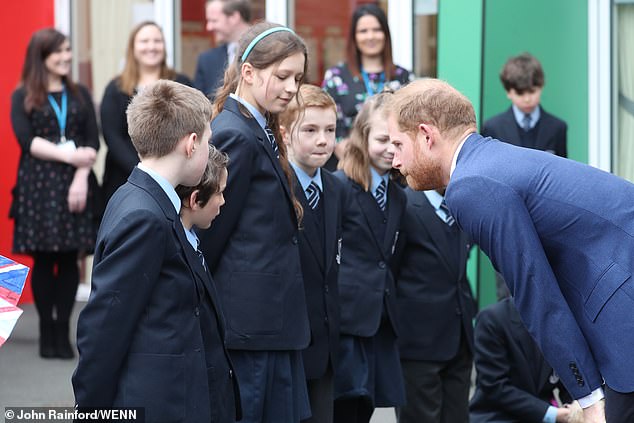 The dog is believed to belong to one of the teachers at the primary school and is thought to be called Winnie.

She sat still for her meeting with the Prince this morning and seemed unfazed by all the extra attention.

Dozens of schoolchildren filled the playground for Prince Harry’s visit and some even waved coloured-in flags as teachers stood nearby.

The Duke of Sussex was handed two presents by the children during the visit, and he lifted one of the boxes to his ear before giving it a playful shake. 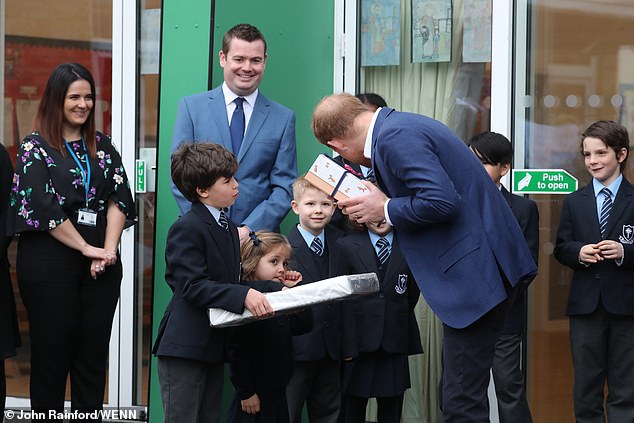 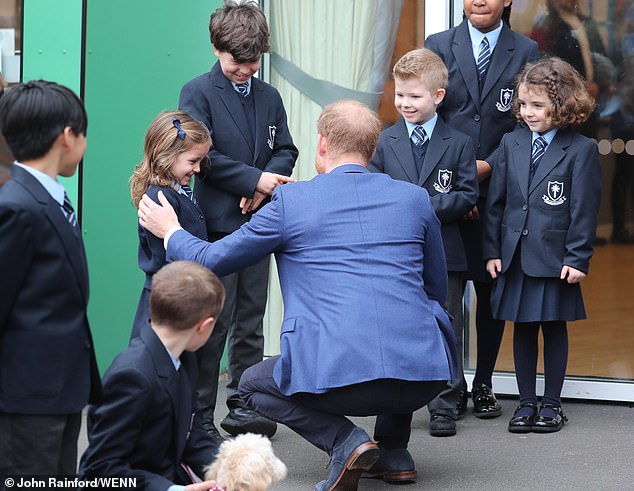 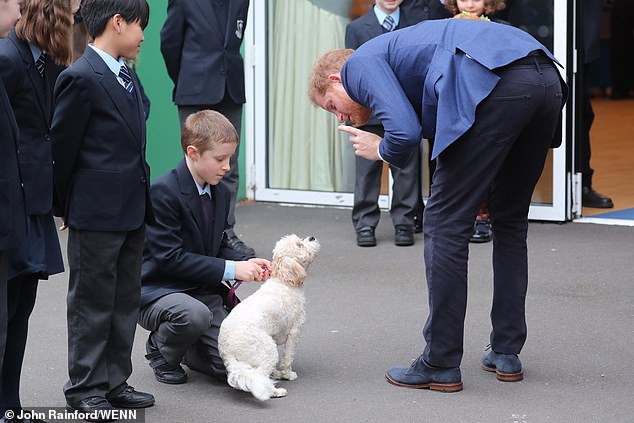 The children from Year 5 will plant saplings in the school’s outdoor nature area today, and this will eventually become their own Forest School.

His Royal Highness will meet the school’s Eco Ambassadors during his visit and will also plant his own tree.

This will mark the achievements of the QCC and the Woodland Trust in providing 74,000 trees across the UK. 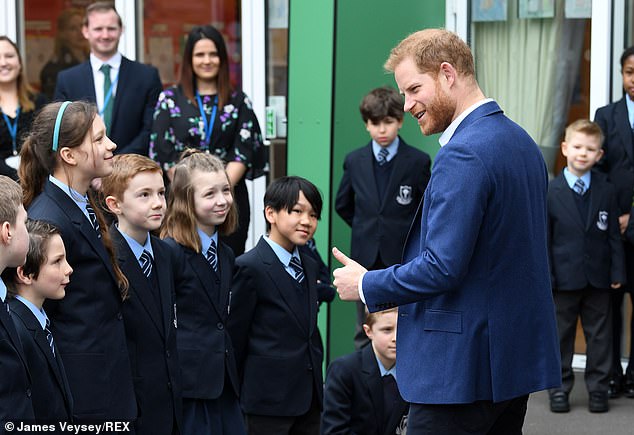 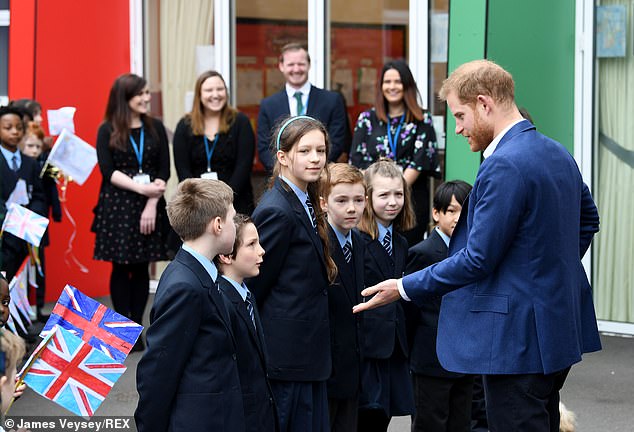 The QCC and the Woodland Trust, with funding from Sainsbury’s, last year launched two free plant-a-tree campaigns to highlight the importance of trees and woods and the impact they have on the environment.

Members of the public could apply for packs containing native broadleaf trees.

The Woodland Trust continues to offer free trees for schools and communities, and is providing St Vincent’s with 60 broadleaf trees.

It is hoped this will encourage and inspire children to learn about the importance of trees to their environment through positive outdoor experiences.

The Queen’s Commonwealth Canopy initiative begun in 2015 as a network of forest conservation programmes throughout the 53 countries of the Commonwealth. 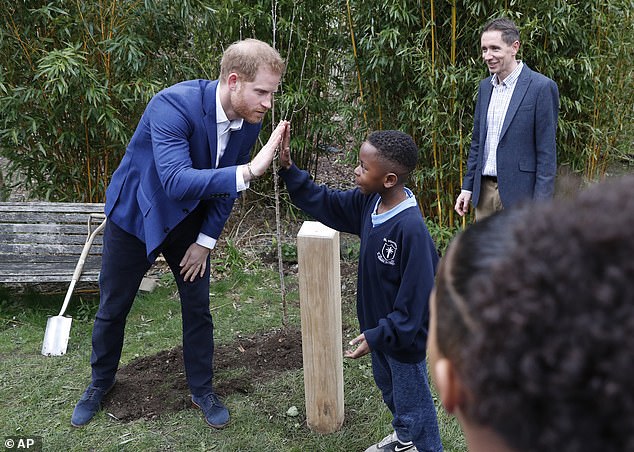 Harry, pictured giving a high five to Asher Charles-Bowen, will plant his own tree in the garden 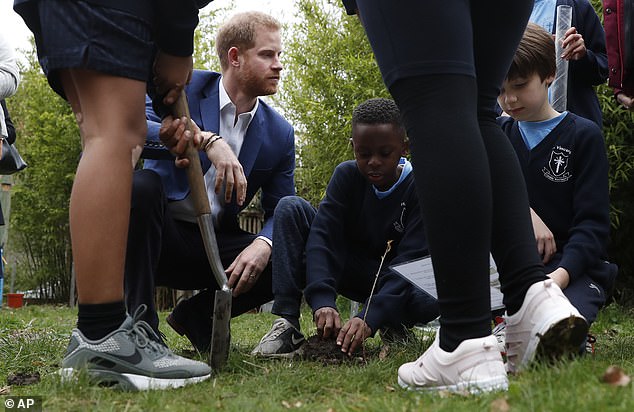 Offset Desperately Wants To Be By Cardi B’s Side At The Grammys: He’s ‘Hoping To Repair Things’ First

‘Take your brain to the gym’: Lockdown great place to learn new skills