Federal and state leaders will hold an emergency meeting on Monday to fix the failures in the vaccine rollout amid growing alarm at the threat to health and the economy from delays to millions of vaccinations.

The national cabinet meeting will canvass urgent changes to the rollout – including federal support for mass vaccination centres – as Prime Minister Scott Morrison admits to “problems in the program” and the need for a new approach. 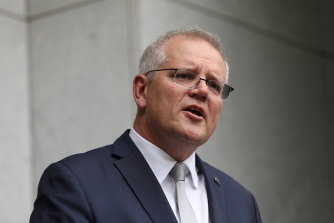 Prime Minister Scott Morrison will chair national cabinet twice a week in order to get on top of the troubled vaccine rollout.Credit:Dominic Lorrimer

In a sudden shift from the monthly meetings of the peak leadership group, Mr Morrison has asked premiers and chief ministers to put national cabinet on an “operational footing” with meetings twice a week until the emergency passes.

The federal move aims to end weeks of conflict between federal and state governments over missed targets to protect Australians from COVID-19, with a promise from Mr Morrison to “unite the nation” even though some of his own ministers fuelled the blame game.

“This is a complex task and there are problems with the program that we need to solve to ensure more Australians can be vaccinated safely and more quickly,” Mr Morrison said in a statement.

“We are throwing everything at these issues, uniting the nation to keep the vaccination program safe, to get the rollout right, and to be open and transparent about how we are tracking.”

Labor leader Anthony Albanese accused the government of repeatedly missing its targets, including its early plan to vaccinate four million people by March, given only 1.2 million people have received a jab so far.

“We were told last year that Australia was at the front of the queue. And we know now that Australia is struggling to get into the top 100 in terms of the rollout of the vaccine,” he said.

About 4.8 per cent of Australians have received their first jab, far below the United States at 56.5 per cent and the European Union at 21.3 per cent, according to a global count by The Financial Times.

Health Minister Greg Hunt said the Pfizer shipments would increase this month and “significantly increase again” in May. The government would need shipments of 575,000 per week from now to November, on average, to reach its earlier target for 20 million doses of the Pfizer vaccine.

Mr Hunt said there would be a “significant sprint” in the rollout after Pfizer shipped another 20 million doses from October.

Mr Morrison contacted Victorian Acting Premier James Merlino on Tuesday afternoon to ask him to back the urgent meeting, while he also texted Victorian Premier Daniel Andrews to tell him of the plan.

NSW Premier Gladys Berejiklian warned on Monday about supply problems, with the state getting more than expected in some weeks and fewer than expected in others. Mr Morrison contacted Ms Berejiklian as well as others, such as Queensland Premier Annastacia Palaszczuk, to seek their support for the new approach.

The federal government wants national cabinet to agree on changes that respond to three challenges with the AstraZeneca vaccine: European Union export bans to Australia, challenges with CSL’s domestic production in Melbourne and medical advice about the risk of a rare blood clot disorder among people aged under 50.

Australian Industry Group chief executive Innes Willox called for urgency in the rollout because the medical advice on the blood clots could undermine confidence in the AstraZeneca vaccine.

“We don’t want to fall too far behind because others will move and we will be left in their dust,” Mr Willox told ABC TV.

National cabinet has not met more than once a week since the early phase of the pandemic more than a year ago. It met every fortnight from May to September last year and then shifted to monthly meetings, with talks added during the breakout in cases last summer.

On Monday evening, an expert medical panel confirmed a second case of a rare clotting disorder called thrombosis with thrombocytopenia was likely to be linked to the vaccination.

The new case was in a woman in her 40s from Western Australia, who had received the vaccine in mid-March in regional WA. She was recently transferred to a Darwin hospital where she remains in intensive care in a stable condition.

The rate of the clotting disorder remains low – one per 350,000 doses – and the country’s top medical experts encourage all Australians to get immunised when their time comes.

“That’s an extremely remote and unlikely event,” Therapeutic Goods Administration head Professor John Skerrit said on Tuesday afternoon. “As I’ve said before, your chances of winning lotto are much, much higher.”

The latest national figures show that 56,379 doses of both Pfizer and AstraZeneca were administered on Monday, taking the total number of doses administered across the country so far to more than 1,234,000. Of those, about 577,000 had been administered by the states and 656,000 through the Commonwealth.

Warning this new £700 bedtime mask may mess up your marriage!