BUYING your favourite bottle of Prosecco is likely to get even more expensive thanks to rising commodity prices in Italy.

As our favourite wines get more expensive, we research where to find the cheapest bottles to stock up your drinks cabinet. 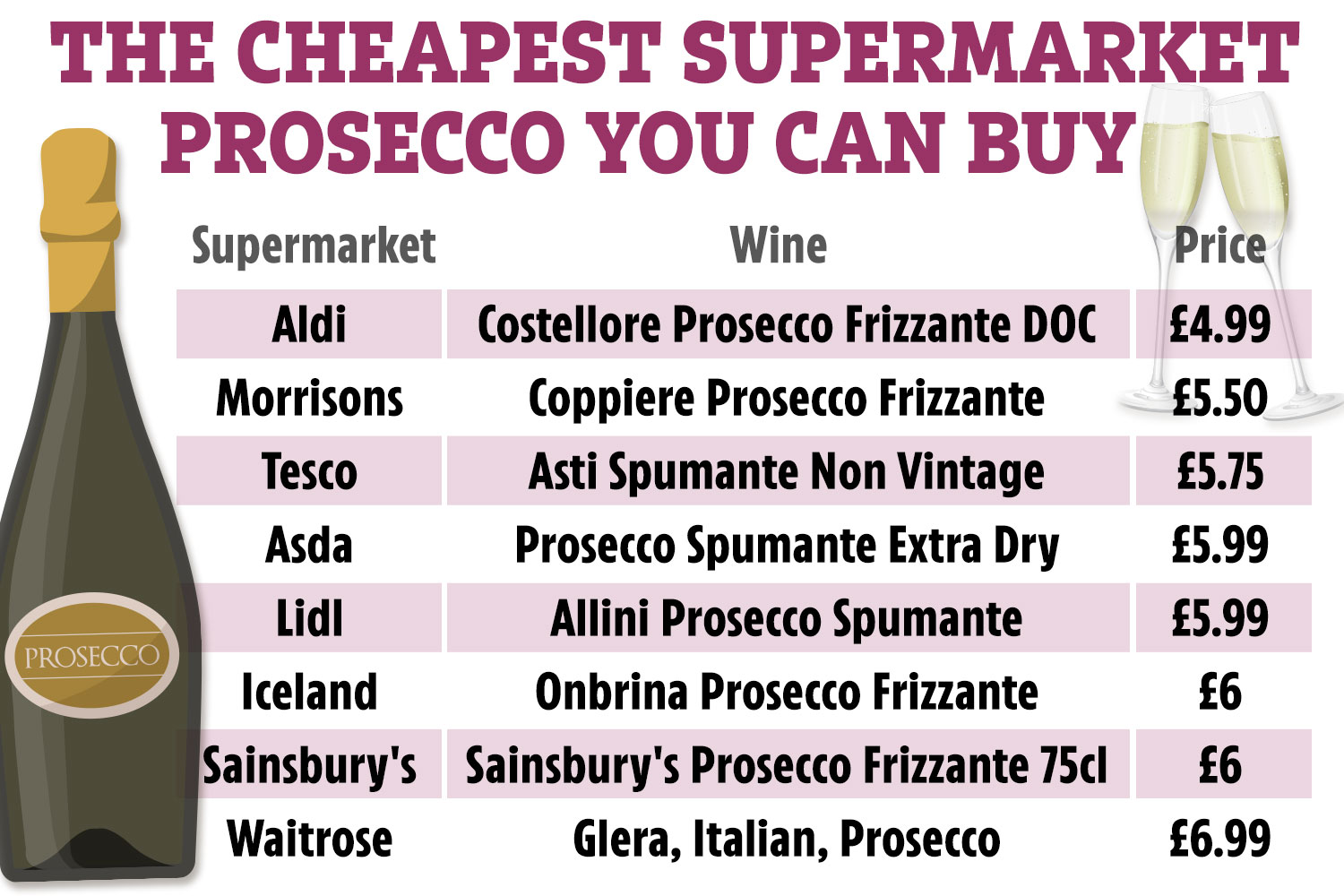 Enormous increases in the cost of materials including wood, paper, metal and glass is likely to have an significant impact on how much we have to pay.

The situation is even more serious because of a poor harvest, which was 9% lower than expected, according to Corriere Vinicolo, the weekly magazine of the Unione Italiana Vini.

Piero Garbellotto, CEO of the wine company Garbellotto told the magazine: “We were forced, for the first time in 20 years, to raise twice in the same year the prices of our products”

Italian wine producers have also said that energy bills are a cause for concern. Corriere Vinicolo reports that energy costs have spiked by 138% since 2020.

All in all, shoppers can expect double digit price rises on popular wines from Italy including Prosecco, Primitivo and Chianti.

So far, wineries haven't put prices up, but the expectation is that we'll start to see bottles getting more expensive from the beginning of next year.

That means there's loads of great deals still available now – and to help you find a bargain, we've rounded up the cheapest supermarket bottles available at the moment.

Here's the best price bottle from each of the major supermarkets from cheapest to most expensive.

Aldi currently tops the charts for the cheapest supermarket Prosecco online, with its Costellore Prosecco Frizzante DOC for just £4.99.

The discounter says the semi-sparkling wine tastes of lemons, limes, grapefruit, peach and a touch of melon in a gentler Frizzante style.

The wine is 10.5% ABV, medium bodied, and Aldi says it works well as an aperitif or with seafood.

If you want the Costellore Prosecco Spumante DOC, which is fully sparkling, you'll need to pay £5.99.

If you want fizz but don't need it to be Prosecco, you can get a Contevedo white sparkling for just £3.99.

Morrisons has the second cheapest option with a bottle of Coppiere Prosecco Frizzante costing just £5.50.

The wine is described as lightly sparkling with crisp green apple notes and a citrus finish.

Morrisons suggests it is served as an apéritif or with canapés, and it comes in at 10% ABV.

If you want a fully sparkling option, you can get Morrisons' The Best Prosecco DOC for just 10p more at £5.60.

It's described as a sweet refreshing wine with flavours of grapes, oranges and peach. Tesco advises it goes best with fresh fruit desserts.

It's got a lower alcohol content than most of the other bottles in the list at just 7% and it's sweeter too.

If you want a Tesco option that's more dry, you can get the Bella Cucina Prosecco for just £5.99.

Asda's Prosecco Spumante Extra Dry may be in joint fourth place at £5.99, but it's the first cheap one that's extra dry and fully sparkling.

It also won a Decanter Bronze award in 2019.

It's described as a delicious sparkler with zesty lemon, pear and apple fruit flavours, where a hint of sweetness is balanced by a refreshing, crisp acidity.

It comes in at 10.5%, but there aren't any pairing suggestions food-wise.

If you're happy to switch from Prosecco, you can save money with a Priogrigio Italian sparkling wine for just £5.49.

It's described as an easy-drinking prosecco with lovely fresh pear aromas and full of fizz – delicious anytime.

If you're happy to switch to Cava instead, you can save extra cash on a Arestel Cava Brut that's just £5.29.

Suprisingly, Iceland was one of the more expensive places to get fizz, with its Onbrina Prosecco Frizzante costing £6.

There are no tasting notes provided online, but we do know it comes in at 10.5% ABV.

It's a Frizzante, which means lightly sparkling, and if you want the full fizz effect you'll have to shell out £7.99 for a bottle of I Heart Prosecco.

Sainsbury's tied with Iceland as its Prosecco Frizzante also comes in at £6.

Again, this is a gentler style of fizz with a soft sparkle. Sainsbury's says its winemakers have created a fresh and delicate wine with notes of crisp green apple.

If you want a stronger sparkle, your cheapest Sainsbury's option is the £7.50 Maschio Prosecco DOC Extra Dry.

Waitrose had the most expensive option at all the supermarkets we looked at, with its NV, Glera, Italian, Prosecco costing £6.99.

The wine is a smooth, fresh and fruity Italian fizz with aromas of wisteria flowers and russet apples. On the palate there is a hint of sweet almond, typical of the Prosecco grape variety.

Waitrose says it would be perfect as an apéritif or, alternatively, as a mix for sparkling cocktails such as Bellinis.

It's the most alcoholic option with an ABV of 11%.

R.V. Burgin, the Marine whose book inspired HBO’s ‘The Pacific,’ dies at 96