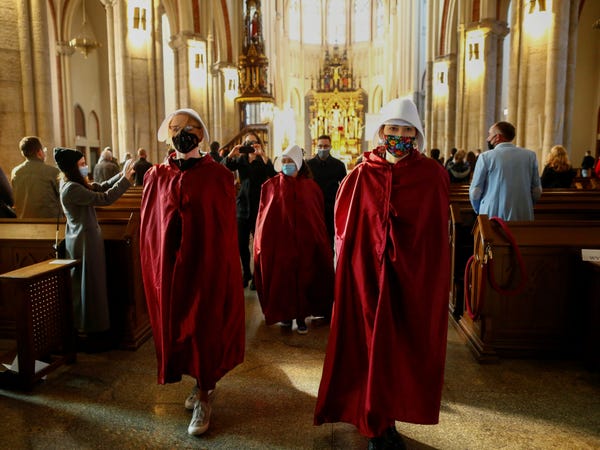 Protestors disrupted church services in Poland on Sunday during the fourth day of protests after a court decision tightened the country's already-strict abortion laws, the Associated Press reported.

Despite COVID-19 restrictions on large gatherings, thousands took to the streets after a court ruling on Thursday determined abortions in the case of fetal defects are unconstitutional.

Poland's abortion laws were already some of the most restrictive in Europe. About 100,000 Polish women are estimated to travel abroad each year in order to seek out the procedure, according to the BBC.

In the wake of the court's ruling, abortions in the country will only be legal in cases of incest, rape, or life-threatening danger to the mother, instances which made up just 2% of legal abortions, the Guardian reported.

The court's decision came after officials from the ruling, right-wing Law and Justice party challenged the existing law last year. Catholic leaders and organizations had encouraged the party to seek heightened restrictions on abortion, according to the BBC.

One video shared on Twitter showed a group standing at an alter, holding protests signs and chanting, while interrupting a church service.

Other images taken by Reuters showed women dressed in long red robes like that of the characters in "The Handmaid's Tale," a book and television series about a dystopian society where women are kept in captivity and used for reproduction purposes against their will.

Police also clashed with protestors, some of whom were seen carrying posters with images of crucified pregnant women.

Disruptions at church services happened throughout the country, including Warsaw, the capital. In one city, Katowice, police said they were attacked and used tear gas against a crowd of 7,000 that was protesting in front of a cathedral, Reuters reported.

Gang of Four Guitarist and Cofounder Andy Gill Dies at 64