Tea with the Queen Consort! Camilla is charmed by a three-week-old baby on a visit to a domestic abuse hub at Chelsea and Westminster Hospital in her first solo engagement in her new role

Queen Consort Camilla made a tiny new friend at Chelsea and Westminster Hospital this afternoon during her first solo engagement since taking on her new title.

The Queen Consort, 75, assured royal fans domestic abuse was still at the top of her agenda as she visited the hospital’s maternity ward, which is a key hub for women who have experienced violence in the home.

While visiting the hub, Camilla, who is a patron of the Safelives charity, met with domestic abuse frontline staff who specialise in dealing with all forms of abuse within families and relationships.

She also had a cup of tea with a pioneer of the charity, Shana Begum, and appeared delighted by Shana’s three-week-old son Jeremy, at the unit. 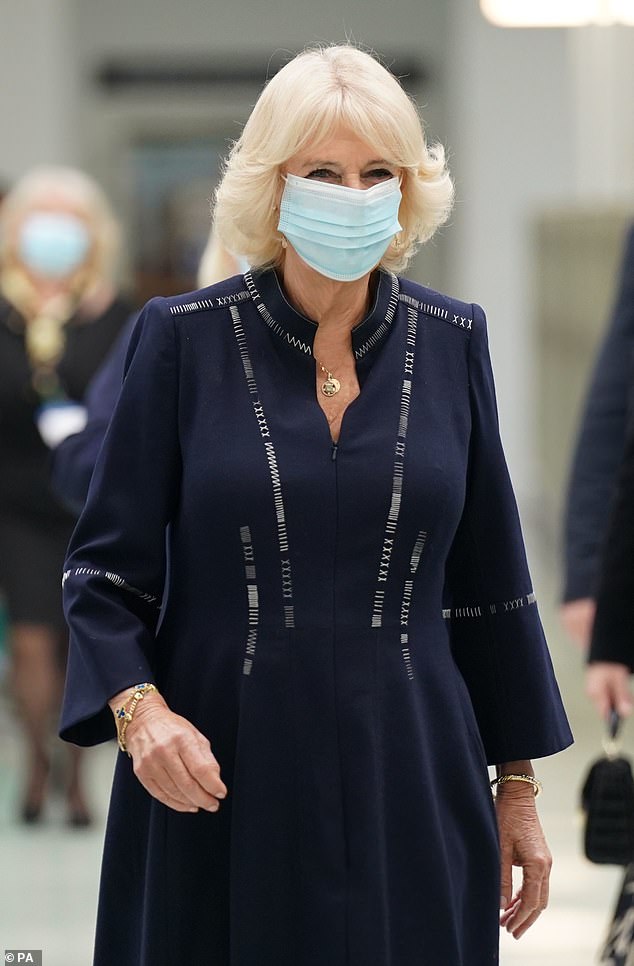 Queen Consort Camilla, 75, appeared to smile from beneath her Covid mask as she visited specialist domestic abuse staff at the maternity hub in Chelsea and Westminster Hospital 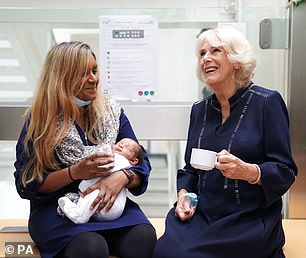 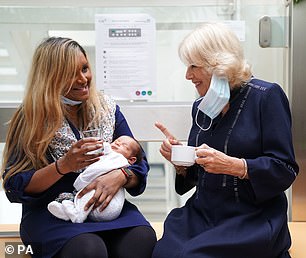 The Queen Consort met with pioneer of the Safelives charity Shana Begum and her three-week-old son, Jeremy, at the hospital

Pictured meeting with the staff inside the hospital, the Queen Consort masked up in line with Covid regulations and shook hands with people who lined up along corridors to meet her.

Since stepping into her role as Queen Consort, MPs and other public figures who champion helping domestic abuse victims have praised Camilla’s record.

Labour MP Jess Phillips tweeted: ‘Had I not had a time limit in the Commons today, I had planned to say this.

‘Queen Consort Camilla is a real champion in the fight against men’s violence against women.’ 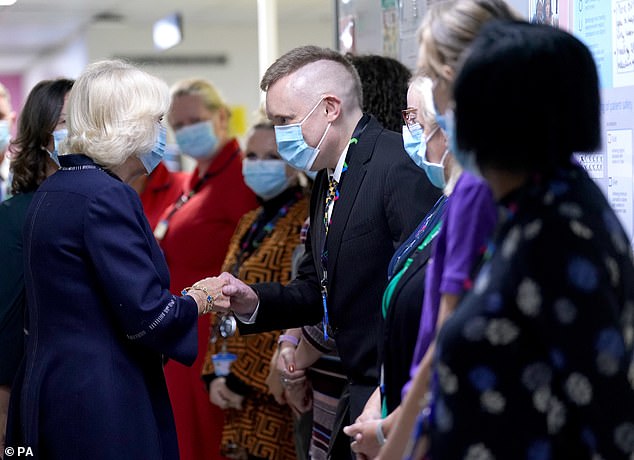 The Queen Consort, who is passionate about ending domestic violence and helping victims of abuse within relationships, shook hands with staff at the ward 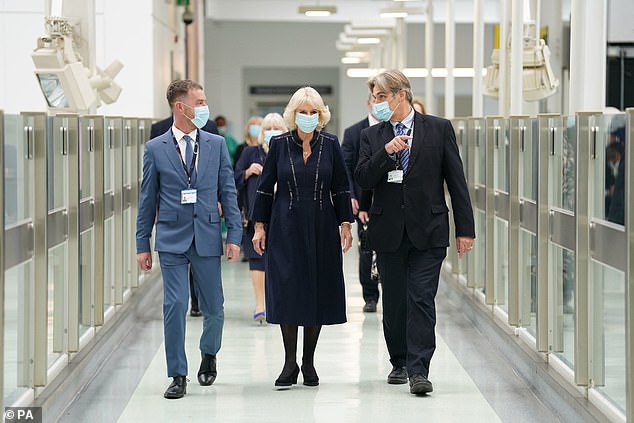 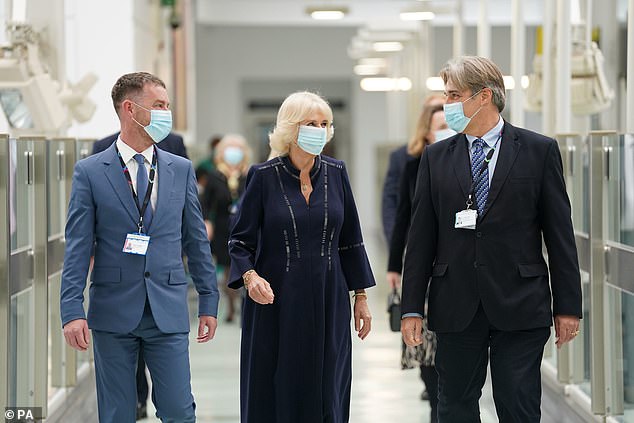 ‘With little fanfare, she has been educating herself and working with NGOs to ensure awareness is raised and action taken. A true champion.’

Earlier this year, Camilla spoke of her work on domestic violence alongside Diana Parkes, whose daughter Joanna Simpson was bludgeoned to death by her husband in 2010. She is said to have been inspired to campaign on the issue after meeting Ms Parkes.

In 2016, Camilla broke down in tears after meeting Ms Parkes and she pledged to do ‘anything I can’ to raise the issue of domestic violence. She told Ms Parkes, then 76, that she was an ‘incredibly brave lady’.

Camilla said recently: ‘Of course it’s a great honour [to one day become Queen Consort], it couldn’t be anything else. But… I’m going to keep up with these causes.

‘You know, if I start something like this, I’m not going to give up mid-channel, I’m just going to keep going to try and help the likes of people like Diana… I hope I should be doing it for a lifetime.’

She has said on the issue of domestic violence: ‘We have got to go back to the beginnings and… just build up this idea that you have to have respect for human beings.

‘It’s treating women like chattels and people thinking they can get away with it. I’m sure a lot of people do it and think that there’s nothing wrong.’

Earlier this year Camilla was invited to guest edit Country Life magazine to mark her 75th birthday in July. To follow her time working on the issue of the magazine, a film crew followed her for a special programme, Camilla’s Country Life, which was broadcast on ITV.

During the programme Camilla, then Duchess of Cornwall, attended a photography exhibition which featured photos of domestic abuse survivors, and she made note of the fact she wanted to include a feature about it in her issue of the magazine.

‘I wanted to point out that in the countryside, it’s not all rosy. There are darker things happening, especially in rural areas where they don’t get quite as much attention as they do in these big cities,’ Camilla said.

She added of the exhibition: ‘It’s incredibly moving. It’s so brave of these women… to get up and talk about it when some of them have sat on it for years and years and years.’