The Queen has paid tribute to the ‘wonderful’ efforts of Commonwealth volunteers – and was treated to her first ever virtual musical performance in honour of her 73rd wedding anniversary.

Wildlife enthusiast Len Peters, from Trinidad, who chatted to the Queen during a video call, was the first person to receive the Commonwealth Points of Light award, which recognises outstanding volunteering work by individuals.

Her Majesty, 94, praised the efforts of Mr Peters, who is a turtle conservationist who featured in Sir David Attenborough’s Blue Planet II series, and two other award recipients who were part of the call.

‘Thank you all for taking part in this programme,’ the monarch said. ‘I’m delighted to have heard your stories and I think it’s wonderful work that you’re all doing, and volunteering so much. Thank you very much.’

The Queen (pictured), 94, has paid tribute to the ‘wonderful’ efforts of Commonwealth volunteers during a virtual video call this week 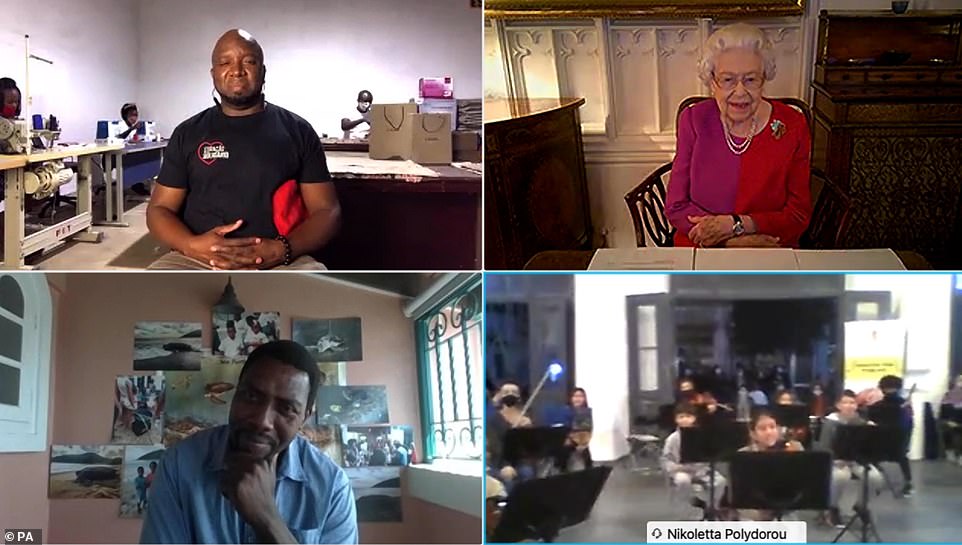 Sir David featured the journey of the conservationist, who in the 1990s began as a concerned member of the public risking his safety to confront machete-wielding fellow islanders from Trinidad, who prized the flesh of leatherback turtles.

He set up beach patrols to ensure egg-laying females were safe and went on to recruit turtle poachers to his conservation effort and trained villagers to lead night-time excursions for tourists to see leatherbacks coming ashore to breed.

The Queen, who donned a red and pink dress along with a pearl necklace, asked Mr Peters about his appearance on the broadcaster’s popular wildlife series: ‘So David Attenborough got to know what you were doing?’

He told the Queen his relatives were one of the largest turtle-eating families in his village but he and a group of friends came together ‘to try and make a difference’. 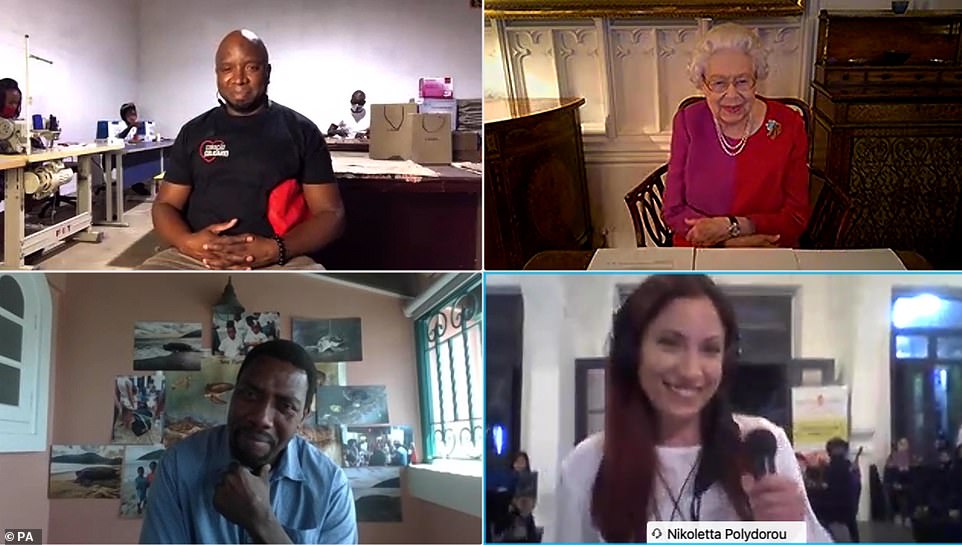 The Queen appeared delighted when when 45 children performed a musical performance in celebration of her recent 73rd wedding anniversary (pictured, bottom right) 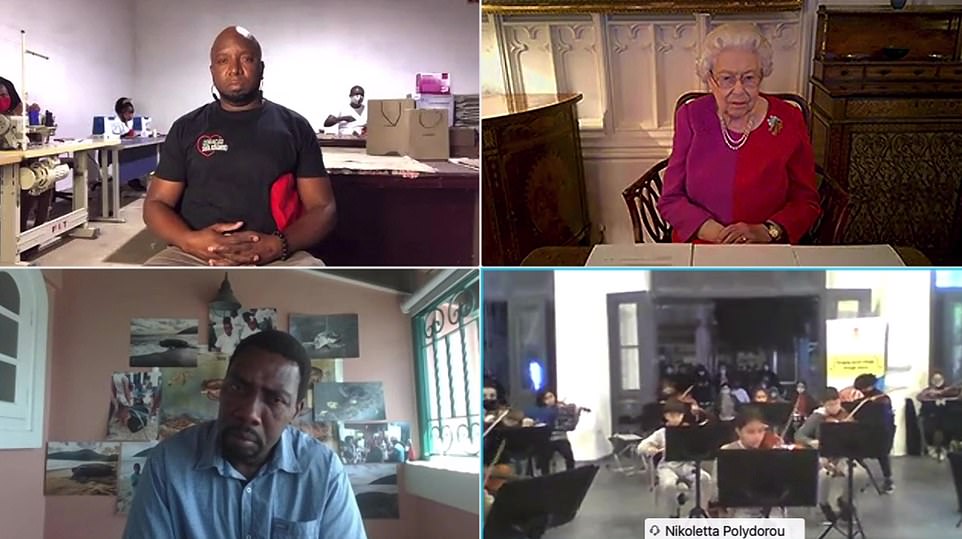 ‘Here you have a young boy from a turtle-eating family wanting to make a difference,’ he said.

‘At night we would walk the beach back and forth protecting the turtles that came up, to try to convince people that it was the right thing to do.

‘What we didn’t know, that 30 years later that effort would see Trinidad being recognised as one of the most important nesting sites for the leatherback seas turtles in the world.’

He said when they started their conservation programme they would have 20 to 30 turtles coming to nest – now they have 500 to 600.

Mr Peters received the Commonwealth Points of Light award for his community-driven Grande Riviere Nature Tour Guide Association and said the project had transformed the lives of those around him, with the economic drive of the community now focused on conservation. 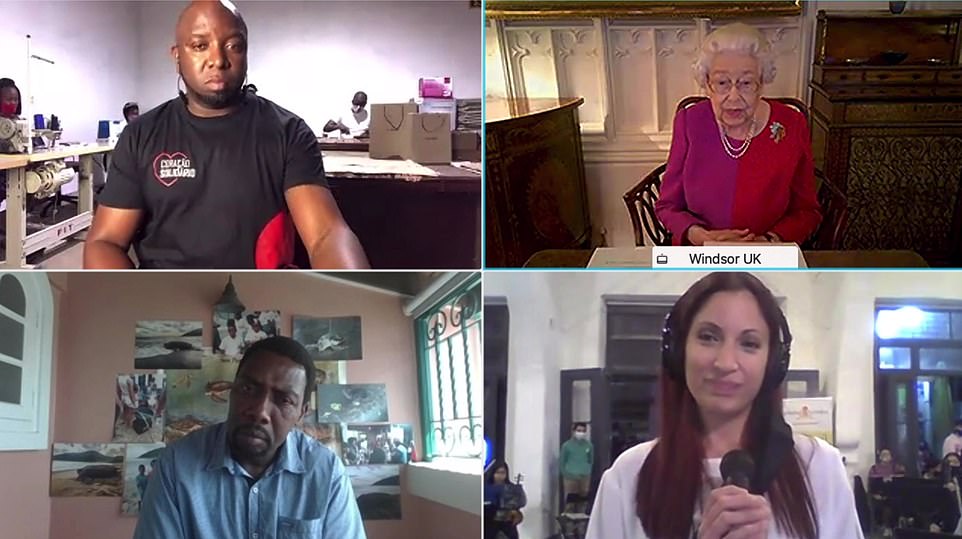 During the call, Ruy Santos (pictured, top left), from Mozambique, took the Queen on a virtual tour of Makobo, a collaborative work space he founded in 2009 to promote nutrition, education and youth employment

The monarch and the Duke of Edinburgh, 99, admired the colourful creation from Prince George, seven, Princess Charlotte, five, and Prince Louis, two, alongside other cards and letters sent by well-wishers in a new official photograph to mark their 73rd wedding anniversary last Friday

Mr Peters said Sir David spent two weeks with them and ‘inspired the children to dream’.

‘That’s very interesting indeed to hear that,’ the Queen replied.

During the video call, the Queen experienced her first virtual musical performance, when 45 children performed in celebration of her recent 73rd wedding anniversary.

The young musicians were from a symphony orchestra that is part of Sistema Cyprus – an organisation founded by Cypriot music teacher Nikoletta Polydorou to support disadvantaged children by providing free music education and instruments.

Also during the call, fellow Commonwealth Points of Light recipient Ruy Santos, from Mozambique, took the Queen on a virtual tour of Makobo, a collaborative work space he founded in 2009 to promote nutrition, education and youth employment.

A beautiful image, shared by Buckingham Palace last Friday to mark the Queen and Prince Philips’s 73rd wedding anniversary, shows the couple looking proudly at card made for them by the Duke and Duchess of Cambridge’s three children.

Prince George, seven, Princess Charlotte, five, and even two-year-old Prince Louis, spent hours creating the colourful greeting card, which features a carefully coloured in large number 73 on the front and is decorated with spots of red, blue, yellow, green and purple.

The picture was taken by Getty Images’ royal photographer, Chris Jackson, in the Oak Room at the royal residence and shows a picture of cosy domesticity that the public so rarely get to see.

In a sweet nod to her husband, the Queen wears the same sapphire and diamond brooch she sported for their honeymoon photo shoot in 1947. She had been given the piece the previous year by Sir James Laing & Sons Limited and the Anglo-Iranian Oil Company Limited when she launched the British Princess oil tanker.

The Queen and Philip’s sofa is comfy rather than grand, littered with cream and red cushions to compliment the gold tasselled curtains pulled back to show a sweeping view of the castle vista.

On the low, glass-topped table in front of them is an array of cards and letters sent by well-wishers to congratulate them on reaching such a remarkable milestone.

He is smartly dressed in grey pressed trousers and a blazer jacket with pocket handkerchief.

The elderly royal is also sporting a Royal Navy blue and burgundy stripped tie, with the only hint of his advancing years a discreet hearing aid in his ear.

The Queen, 94, is, as usual, immaculate in a pale blue double wool crepe dress by Stewart Parvin, and a piece of jewellery with meaning for the occasion, the Chrysanthemum Brooch.

The sapphire and diamond piece, set in platinum, was worn by the then Princess Elizabeth, in images taken on her honeymoon at Broadlands in Hampshire in 1947.

The brooch was a gift to then-Princess Elizabeth for launching the British Princess oil tanker in 1946.

The brooch was given by Sir James Laing & Sons Limited and the Anglo-Iranian Oil Company Limited. She wore it often in the early years, before her collection grew.

She also wore it in images taken to mark her and the Duke’s 60th wedding anniversary in 2007.

Her Majesty has also worn it during other significant events in her life, both professional and personal, including in 1950 for a portrait with Prince Philip, Prince Charles, and a baby Princess Anne.

Wetherspoons announces huge change to its pubs for when they reopen