Millions of Australians are bracing themselves for a soaking in Saturday’s queues to vote in the federal election, as the Bureau of Meteorology predicts heavy rain across all of Australia’s states and territories except for the Northern Territory. 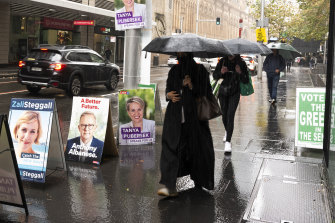 Sydneysiders should brace themselves to be rained on in the line to vote in the federal election on Saturday.Credit:Louise Kennerley

The city is forecast to experience localised falls of up to 20 to 30 millimetres every day from Saturday until Thursday but bureau meteorologist Stephen Stefanac said flash flooding was unlikely.

“From a forecasting perspective, we’re not expecting heavy rainfall enough to be dangerous but there will be light to medium showers every day,” he said.

Stefanac said voters should be aware that, while the rain was not expected to cause flooding, “it’ll be a nuisance to those waiting at a polling booth [if] there’s a random downpour” and advised those with outdoor plans to be equipped with umbrellas.

He said heavy falls were expected along the coastal fringes of Australia, particularly in the south-east of Queensland, which will flow into northern NSW due to a high predicted to move across the Tasman Sea from Tasmania over the next week.

At this stage, no new flood warning have been issued. Existing warnings are contained to inland areas west of the Great Dividing Range or close to the Queensland border due to the recent downpours in the state that have begun flowing into northern NSW.