Businesses went on a record-breaking hiring spree in November, but there is uncertainty for job hunters as Omicron takes hold with the first slip in recruitment activity since government-imposed lockdowns were lifted.

In the November quarter an extra 396,100 jobs were advertised across the country, Australian Bureau of Statistics data shows, reflecting a sharp improvement as lockdowns to contain Delta came to an end. This included 361,700 jobs in the private sector. 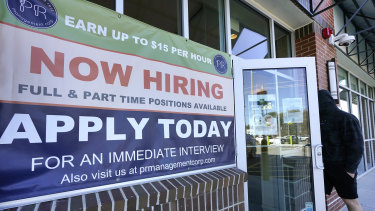 This employment boom may be short-lived, with the National Skills Commission’s Internet Vacancy Index showing online job advertisements fell in December as Omicron took hold, marking the first drop since the recovery from Delta. The 2.5 per cent reduction over the month meant there were about 6200 fewer job advertisements at the end of the year than in November on this measure.

The only areas to record growth in job advertisements were Western Australia and Queensland, where ads were up 1 per cent and 0.1 per cent respectively. The ACT had the biggest decline in vacancies, with a 9 per cent fall, followed by Victoria down 5.8 per cent and NSW down 3.7 per cent.

Despite the drop at the end of the year, job advertisements on the Commission’s estimate remain 46 per cent higher than pre-pandemic levels and are up in every state and territory. The official statistics bureau also records job vacancies as being well above pre-COVID levels.

“These figures continue to show the high demand for workers from businesses emerging from lockdowns, together with ongoing labour shortages, particularly in lower-paying industries,” Mr Jarvis said. “Many businesses continued to report difficulties in filling their vacancies.”

Job search website Indeed’s Asia Pacific economist Callam Pickering said the jobs market remained strong over December, and he suspected seasonality may be partly to blame for any decline.

“Traditionally December and January can be quite weak in terms of postings and vacancies, it’s seasonally the weakest period of the year,” Mr Pickering said.

“The impact of Delta was a lot less than the 2020 lockdowns and given that there isn’t [a government-imposed lockdown] this time, Omicron will probably be less again,” he said, adding it could even increase hiring activity due to some being forced into isolation, requiring employers to fill roles with new staff.

“It’s just too early to say how resilient the market will be. There’s so much uncertainty with Omicron and the economic impact.”

New Reserve Bank data shows households spent at record levels in November with credit card transactions hitting $25.7 billion over the month and debit cards at $43 billion, marking the first time this spending has surpassed pre-pandemic levels. But confidence has fallen since the outbreak of Omicron across the country, with households in a self-imposed “shadow lockdown” and cutting spending back to Delta levels.

The recovery from Delta has some analysts confident the economy will recover from any Omicron-driven slump.

“While the Delta-related lockdowns were dreadful, they had no lasting impact on employment or the creation of new job opportunities across New South Wales or Victoria,” Mr Pickering said.

The jobless rate fell to 4.6 per cent in November, after jumping to 5.2 per cent in October as lockdowns were introduced. The unemployment rate peaked at 7.4 per cent in July 2020 at the initial height of the pandemic, which was much lower than official double-digit expectations.

Commonwealth Bank of Australia chief economist Belinda Allen said the November data represented the “height of the post-Delta recovery” and the situation had changed with the latest variant.

“The focus has turned swiftly to staff shortages caused by COVID and isolation requirements. These difficulties are being compounded by staff shortages that were already in place due to the closure of the international border,” Ms Allen said.

The private sector led the improvement in November with a 19 per cent rise in job vacancies compared to almost 10 per cent for the public sector. All industries reported an increase in vacancies.

Tesco, Asda and Sainsbury’s quietest times to shop to avoid queues in run up to Christmas