If the Marvel superhero movies on the whole are your favorite band’s individual albums, “Avengers: Endgame” is the triple-disc greatest-hits package with the really awesome cover and a slew of familiar, comforting gems inside.

Directed by Joe and Anthony Russo, “Endgame” (★★★½ out of four; rated PG-13; opens nationwide Friday, though theaters will show it Thursday night) is the yin to the yang of last year’s cliffhanger-y “Infinity War” but also the culmination of the 21 Marvel films that came before it, with callbacks to past adventures and a Titanic boat-load of characters. So fortune favors those who’ve put in their homework, whether they’ve just binged the movies prior to the newest blockbuster or been hanging tough with the gang since Robert Downey Jr. first said, “I am Iron Man” without a touch of irony 11 years ago.

‘One for the ages’: First reactions to ‘Avengers: Endgame’ hail Marvel ‘epic’

When last we saw our heroes, they were licking their wounds and mourning lost friends – Black Panther (Chadwick Boseman) and Spider-Man (Tom Holland), we hardly knew ye – after cosmic villain Thanos (Josh Brolin) used six all-powerful Infinity Stones to bring balance to the universe by wiping out half of existence. The good guys now are pretty irked about the whole thing, and they decide to go another round with Thanos, this time with some added help – including the new superhero on the block, Captain Marvel (Brie Larson). 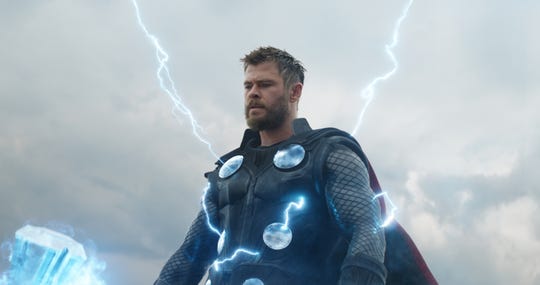 Thor (Chris Hemsworth) has a score to settle with a certain space baddie in "Avengers: Endgame." (Photo: MARVEL STUDIOS)

Revealing any more details would probably earn a very severe talking-to from Cap. That said, “Endgame” mines some serious matters while being way funnier than any “Avengers” flick before it, exposing unseen weaknesses and new strengths in people we’ve spent hours watching and worrying about in darkened theaters. Plus, the thing renders the word “epic” pretty much obsolete.

“Endgame” loses some of its momentum in the middle of its three-hour run time, but unleashes the largest and most fist-pumping, goosebump-causing, insanely destructive action climax in a superhero movie yet. Good luck to anybody trying to surpass this one, because the mold’s been broken.

There's a new "Avengers: Endgame" trailer, and it's just as epic as you expect.
USA TODAY

In that way, it’s peak Marvel in terms of sheer spectacle, although for once “Endgame” is one of these hero-fests that revels in its present rather than looking to the future. The main characters here, although their abilities are otherworldly, are seen at their most human weighing loss and life. What is worth the ultimate sacrifice to those who can seemingly bring the world to its feet, and what do amazing folks do with second and third chances after proving they’re not as amazing as they once thought?

It allows for awesome character moments across the board: Downey and Evans shine like the all-stars they’ve always been, but Ruffalo, Johansson, Renner, Hemsworth and Paul Rudd (as Ant-Man) also do some of their superhero best.

“Endgame” is tragic and uplifting, rousing and grounding, while leaving minds racing and making everybody cry (even the toughest guys). Marvel movies have managed to find endearing, crowd-pleasing magic amid these fun and flawed comic-book characters in the past decade, and “Endgame” pays off all that goodwill by letting them do what they do best on the biggest stage yet.

13 Amazing Photos You Missed This Week

Debenhams administration fears as shares suspended: Up to 50 stores closing – but which?