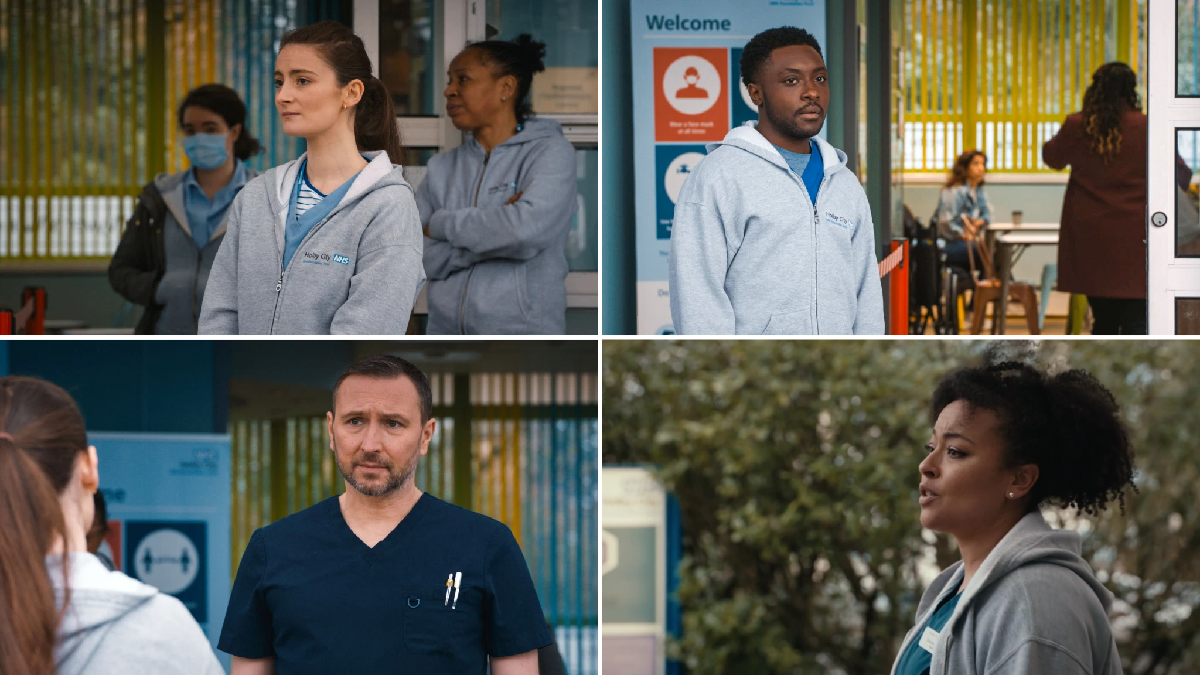 Donna (Jaye Jacobs) brought the nurses out in protest in tonight’s Holby City. It was more of a handful of people than a seething mob, but since every nurse we know by name was out on the picket line it was guaranteed to cause chaos. Fletch (Alex Walkinshaw), being a nurse himself, felt that the protest was quite valid.

Director of finance Jeni Sinclaire (Debra Stephenson) thought it wasn’t a good look as far as fundraising was concerned. And Henrik Hanssen (Guy Henry) thought the nurses would get fed up as soon as they got cold and hungry and would give up.

This apparent lack of compassion of course masks a very troubled state of mind for Hanssen. Following the return of his abuser Reyhan Shah into his life, and Reyhan’s recent death, Hanssen’s mental state has gone downhill to the point where this week F1 Josh Hudson (Trieve Blackwood-Cambridge) caught Hanssen in the basement, apparently self-harming. Hanssen has threatened him into silence about it, telling him, ‘There’s a fine line between a promising career and a complete dead end.’

As far as the nurses’ protest was concerned, Hanssen was in no mood to listen and promptly fired Donna for gross misconduct for calling the protest without going through the proper channels.

Naturally, because Donna is wonderful, everyone was outraged and upset to hear this and Hanssen realised he’d made a mistake and un-sacked her. This was after he’d spotted her helping Sacha (Bob Barrett) operate on Dominic (David Ames) when she shouldn’t technically have been there. ‘Reckless, stupid – but admirable’ Hanssen said of Donna’s behaviour.

The reason Sacha was once again operating on Dominic was that Dom had been hiding the fact that he was in terrible pain, instead acting all chirpy and ready to be discharged. He got as far as a store cupboard before collapsing. And sadly Sacha had no option but to give Dominic a stoma again because his bowel had become so diseased. Dominic is going to be heartbroken to find he’s back in the position he was before.

Dominic wasn’t the only staff member to spend some time collapsed on a floor. That was also the condition that Andrei (Sonny Poon Tip) found Kian (Ramin Karimloo) in, but in Kian’s case it was self inflicted. Andrei went to Lucky Simpson (Vineeta Rishi) to tell her that Kian is still using drugs. Her solution is that she’s going to move in with Kian and Andrei so she can keep an eye on the hunky drug addict surgeon and his drug mule friend at all times. As Kian himself said: ‘Nooooo!’

In other news, Jeong-Soo (Chan Woo Lim) once again did good work, supporting a woman who was being abused to leave her boyfriend.

He got on with this quietly and efficiently, while Josh was rushing about trying to break Ric Griffin’s record for the the most patients treated in the shortest time, while also arranging liaisons with Ange (Dawn Steele) in the basement.

Sue Haasler is the author of five novels and the official BBC Holby City book, which you can read about here.