RICHARD LITTLEJOHN: Your bill, sir, £394bn… service not included. Like most of you, I can’t get my head around the astronomical sums of that have been thrown at Covid-19

Doesn’t sound much when you say it quickly, does it? £394 billion. Three hundred and ninety-four billion.

Call it £400 billion for cash, love, and take one for yourself.

Like most of you, I can’t even begin to get my head around the astronomical sums of money that have been thrown at Covid.

Depending on who you believe, Britain now has the biggest national debt since the financial crisis of 2008, World War II or the Norman Conquest.

And, trust me, you will pay your money, one way or the other. 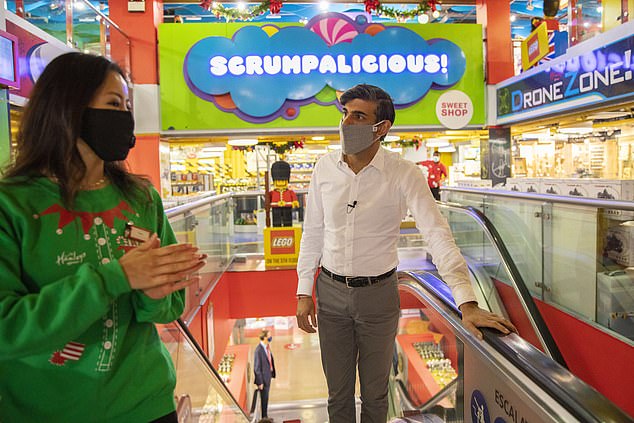 Pictured: Chancellor of the Exchequer Rishi Sunak meets staff, who have returned to work after being furloughed, at Hamleys toy shop in central London

Chancellor Dishi Rishi, who has spent the past nine months behaving like a sailor on shore leave, has finally realised that all the spondulicks he’s been shovelling on to a grateful nation will have to be repaid.

That’s going to mean much higher taxes, sooner rather than later, especially if the current rock-bottom interest rates start to rise.

Until now, the Chancellor has been content to max out the credit cards and let the Bank of England print money, like a counterfeiting factory on an industrial estate in Acton.

We may soon discover that the billions created by ‘quantitative easing’ are about as kosher as the moody £20 notes The Syrup used to buy a brand new Roger Moore toupee from Robbie Coltrane’s hairdresser Mr Henry in Minder.

How long before the bailiffs move in, repossess all the furniture and leave us sitting on the floor in an empty apartment, like Barry the Bookie?

Yet, Sunak aside, reality still doesn’t seem to have dawned on the political class. Not a day passes without fresh calls for more ‘assistance’ from the Treasury.

Turn on the TV any lunchtime and there’s Wee Burney and Her Amazing Dancing Bear demanding that English taxpayers go ever deeper into debt to finance her blatant bribes designed to persuade the Scots to vote for independence.

Where’s the money coming from? Wee Burney doesn’t give a monkey’s. Not her problem, pal.

Labour’s just as bad. The Opposition would cheerfully shut down the economy for ever, provided the Government keeps doling out the dosh.

The Mail’s recent brilliant investigation, in conjunction with the TaxPayers’ Alliance, exposed the rampant abuse of public money on all manner of fripperies. 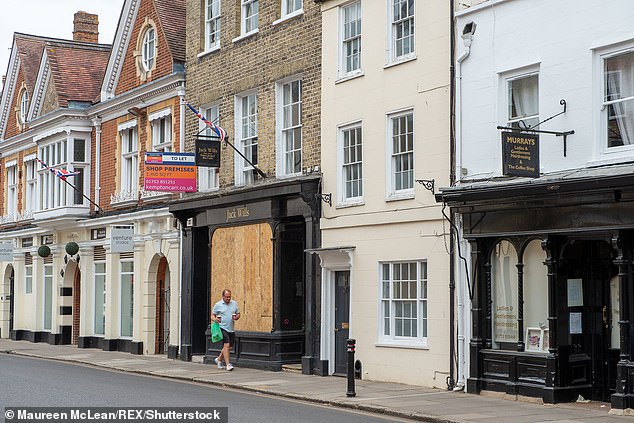 Pictured: A man walks past a boarded up former Jack Wills shop in Eton High Street in Berkshire

Civil servants have squandered a grotesque £5.6 billion on everything from first-class flights and lavish bonuses to away days and expensive art collections.

Taxpayers were even forced to fork out £6,000 for treatment at a Harley Street clinic which specialises in designer vaginas.

You couldn’t make it up.

While we can’t begin to comprehend sums like £394 billion, we can get to grips with some of the smaller amounts being chucked around in the name of combating the pandemic.

One of the worst offenders is the Extinction Rebellion poster boy Grant Shapps, allegedly a pro-business, pro-liberty Conservative Transport Secretary charged with keeping Britain moving — not bringing it to a complete standstill.

To burnish his ‘green’ credentials he bunged councils £225 million we haven’t got to litter the country with ‘people-friendly’ streets, without any checks or restraint on how the money was spent.

Just as I predicted at the start of the pandemic, this has inevitably caused chaos on the roads and widespread resentment.

Let’s examine one scheme, the cycle lane which runs along Kensington High Street in London, past the Mail’s headquarters. Sanity has at last prevailed and the local council is ripping it out, after protests from businesses, motorists, cabbies, the emergency services and residents including the actor Nigel Havers.

Run that by me again. How the hell does a mile-long stretch of bike lane cost north of three hundred grand? It’s not as if there’s any major construction work involved. The project consists of poles stuck in the road every few yards and some hastily painted cycle symbols. And, er, that’s it.

More from Richard Littlejohn for the Daily Mail…

Where do they get £320,000 from? You can pick up 3ft plastic poles from B&Q for £4.20 a pop. Buy a gross and I’m sure you could negotiate a discount. Chuck in a few pots of Dulux Magic White emulsion and you’re off to the races. Job done.

Come to that, they could have got a crew from the travelling community to knock it out for a fraction of the price.

‘Hello, there, sur. Top of the morning to you. It’s a cycle lane you’re after, is it? Tell yer what, I’ve got a load of Tarmac on the lorry, left over from a driveway round the corner. We can whack it down in a jiffy and be out of yer hair by lunchtime. Call it five grand. You’re a toff and no mistake. Sorry, no cheques.’

Now it’s being dug up, along with dozens of similar ridiculous schemes across the country — one of the most expensive reverse ferrets of the year. What a waste.

Look, I accept the bulk of the money spent on furlough and other business support schemes was probably necessary to keep the country afloat — if only because the Government screwed up spectacularly by locking down too hard and too often.

But there’s absolutely no excuse for the countless billions which have been frittered away on everything from deserted bike lanes to designer wossnames.

The day of reckoning is coming. The good news is there’s now a vaccine for Covid. Sadly, no one has yet come up with a vaccine for chronic debt. We are all going to pay through higher taxes. Prepare for the sound of squeaking pips.

It’s finally dawned on Dishi Rishi, the man behind Money For Nothing And Your Chips For Free, that there really is no such thing as a free lunch. Let’s have your glasses, ladies and gentlemen, please. Here comes the bill.

That’ll be £394 billion, plus VAT. And no, service is not included.

The transformation of Harry Markle from cold-blooded killer, piloting a helicopter gunship against the Taliban, to full-blown snowflake has been hilarious.

He’s gone from prancing around buck-naked in Las Vegas to embracing all manner of hippy-dippy New Age wokery.

Following his move to California, he sounds as if he’s been brainwashed by this year’s version of the Manson Family.

In an extraordinary outburst, Harry’s urging people to ‘be more like raindrops’ in the fight against climate change. 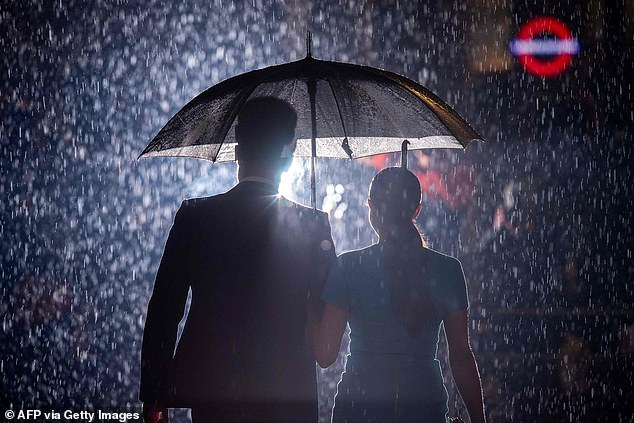 The transformation of Harry Markle from cold-blooded killer, piloting a helicopter gunship against the Taliban, to full-blown snowflake has been hilarious

Nurse! A Hollywood career now beckons, thanks to a multi-million-dollar deal with Netflix. Perhaps he could start by starring alongside his wife in a remake of Butch Cassidy And The Sundance Kid.

In the original, Paul Newman squires Katharine Ross round a farmyard on a pushbike.

In the remake, it’d be Meghan steering and pedalling while Harry hangs on to the handlebars for dear life, as the aptly named B.J. Thomas sings: Raindrops keep falling on my head!

The first shipment of Covid vaccine was shrouded in secrecy to keep its destination from criminal gangs and anti-vaxx protesters.

I can’t help feeling the authorities missed a trick. With just four weeks before we finally leave the EU for good, the opportunity for cut-price booze cruises is fading fast.

They could have smuggled the vaccine over in the back of a van full of cheap beer and wine.

Mind you, there’s always the danger that when they opened the doors a bunch of illegal migrants would jump out — like the one Del and Rodney found in the back of Denzil’s van in Only Fools. Gareee!

Still, at least they’d be able to give them the jab on the spot, just to be on the safe side. 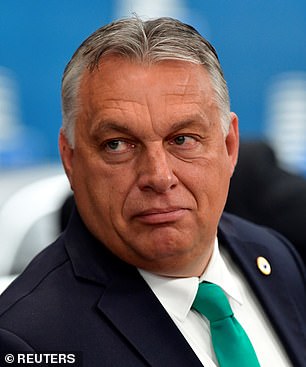 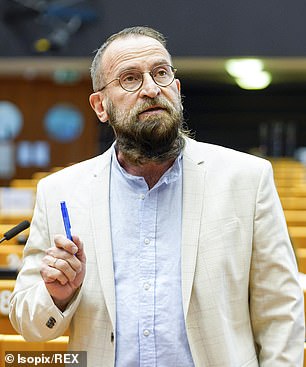 There’s always been a strong homoerotic tendency on the Far Right. Hitler had a group of Waffen SS officers shot for taking part in same-sex parties.

That would explain the obsession with uniforms. In Britain, the old National Front were at it like knives. Martin Webster, the NF’s leader was well known for it.

I particularly enjoyed the blunt honesty of the Brussels police spokesman, in stark contrast to the usual mealy-mouthed dissembling we get from the Yard.

‘We interrupted a gang-bang,’ he said. Sounds like the Black Lace tune from Rita, Sue And Bob Too.

Only in this case it was Bob, Hugh And Viktor Too!