Home » Lifestyle » ROSS CLARK: Why your hybrid car isn't nearly as green as you thought

ROSS CLARK: What a shocker… or why your new hybrid car isn’t nearly as green as you thought 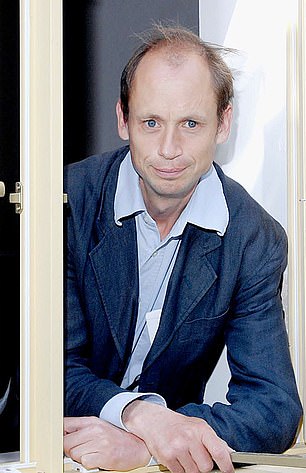 ROSS CLARK: Motorists who splashed out on a hybrid car are feeling that they’ve been sold a pig in a poke

How ironic that the word ‘hybrid’ is derived from the Latin for the offspring of a wild boar and a tame sow.

Because right now many motorists who splashed out on a hybrid car — in the belief that they are doing both the planet and their pockets a favour — are feeling that they’ve been sold a pig in a poke.

According to a survey by the consumer magazine Which? the average plug-in hybrid car uses two-and-a-half times as much petrol or diesel — rising to four times for the worst performing models — as manufacturers claim.

Which? showed that the 22 dual-power supply models tested (combustion-engine cars with an electric battery option) managed an average of 67.3 miles per gallon (mpg) when driven on the road in ‘real life’ conditions.

This compared with 171 mpg achieved in the standard Worldwide Harmonised Light Vehicle Test Procedure, which is a laboratory test used in the motor industry.

Admittedly, 67 mpg is pretty good by historic standards — it is half as much again as the original Mini managed when launched in 1959.

That family-sized cars can eke out so many miles from a gallon is a tribute to scientists and engineers who’ve improved the combustion engine over the past 60 years.

But if a company is crowing about its environmental credentials as it encourages us to fork out a premium on the purchase costs of a plug-in hybrid — on the basis that it is a cleaner, greener and more economic drive in the long term — then this is not good enough. 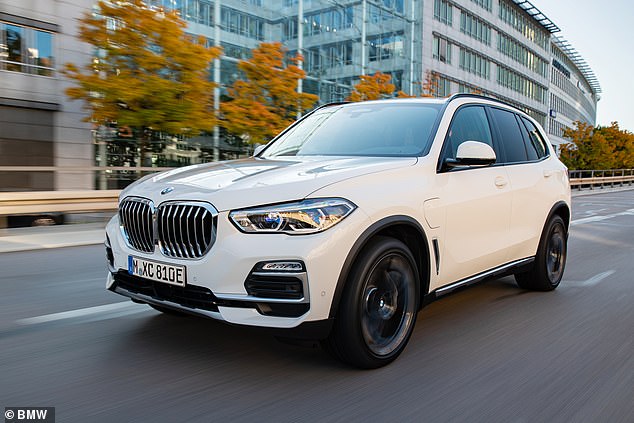 According to a survey by the consumer magazine Which? the average plug-in hybrid car uses two-and-a-half times as much petrol or diesel. Pictured: BMW X5

We’ve been here before, of course. Many readers will remember the 2015 Volkswagen diesel scandal after the German company embarked on a huge marketing drive to sell diesel cars by trumpeting their lower emissions.

It was caught out by the U.S. Environmental Protection Agency using software in its diesel engines that could detect when cars were being tested and so alter performance to reduce power and fuel consumption to comply with official targets.

Out on the road, motorists would find themselves consuming far greater quantities of fuel and pumping out far higher levels of dangerous pollutants.

Volkswagen was ordered to pay $2.8 billion by a U.S. court in 2017 for cheating on its emissions tests and to date has spent more than $33 billion, mainly in the U.S., on other fines, penalties and in compensating motorists.

It faced far fewer penalties in Europe and in the UK although our own government had spent years promoting diesel cars because they were supposedly better for the environment. 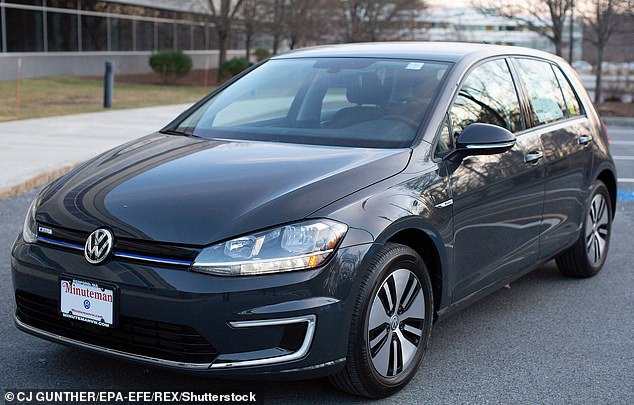 Pay £28,000 for a Volkswagen e-Golf (pictured) and the marketing blurb says it ought to manage 144 miles between charges

Under Blair, road tax was reformed to incentivise the purchase of cars with low carbon emissions figures — which boosted the sale of diesel cars.

And yet, as drivers later discovered to their horror, these cars were found to emit far more nitrogen oxides, chemicals that have been linked to heart and lung disease.

Something similar now is happening with hybrids.

In recent years, we have been encouraged to buy them — they are seen as a transitional alternative to the fully electric vehicles which are the future — on the basis that we will be slashing our carbon emissions.

Initially, there were generous government grants and indeed plug-in hybrids (which can be charged by means of a cable via the home or at a public charge point) increased their share of the market by 100 per cent last year.

Along with mild hybrid cars (which you can’t plug in, but which recover energy whenever you brake) they accounted for one in five of all cars sold. 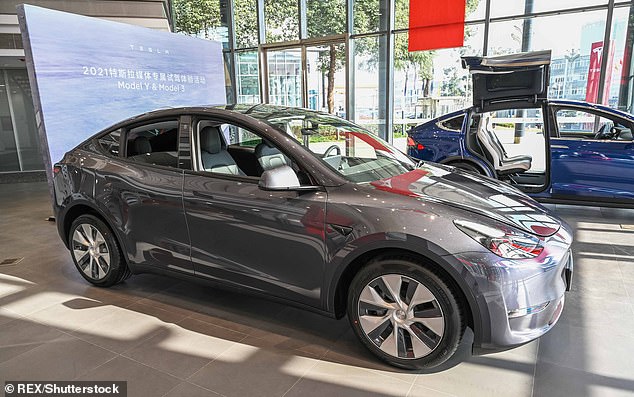 Shell out £40,000 for a Tesla Model 3 (pictured) and you might reasonably expect it to manage the 360 miles between charges that the company’s website claims

Yet now it turns out their environmental credentials are hugely overstated.

I wish I could say that pure electric cars were much better, but they, too, are plagued by exaggerated claims.

Pay £28,000 for a Volkswagen e-Golf and the marketing blurb says it ought to manage 144 miles between charges. When What Car magazine tested it, it managed just 117 miles.

Shell out £40,000 for a Tesla Model 3 and you might reasonably expect it to manage the 360 miles between charges that the company’s website claims.

Read the small print, though, and that turns out to be for the long-range model.

The standard model is claimed to do 278 miles. But even that is optimistic — when What Car tested one, it managed 181 miles before needing to be plugged in. 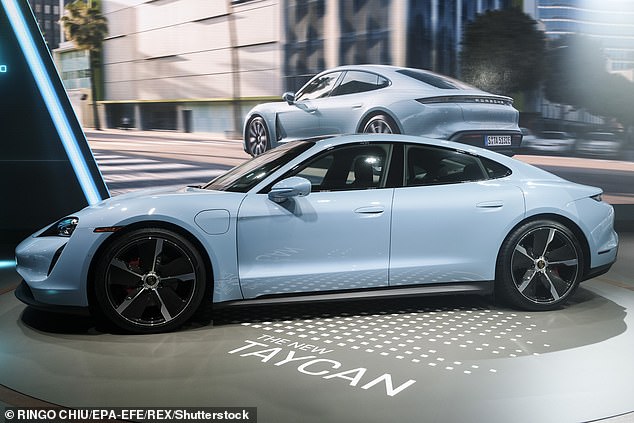 Prices for a Porsche Taycan (pictured) start at £83,000 but one owner claimed she found herself taking nine hours to drive 130 miles due to re-charging stops

For those who need to do long journeys on a regular basis, be it for work or personal reasons, this is entirely impractical.

Who can afford to risk spending hours looking for a working charging point — there are simply not enough of them — and then hanging around while the car recharges?

If I ever find myself wavering and thinking about an electric car, I remind myself of Linda Barnes of Kent who, according to recent newspaper reports, bought a Porsche Taycan (prices start at £83,000) and found herself taking nine hours to drive the 130 miles home from Bournemouth.

On the way she had to visit six recharging stations before she found a functioning recharger. It would have been quicker — and greener — to go by bike.

Of course, electric cars are only as ‘green’ as the electricity used to recharge them.

In 2019, 43 per cent of our electricity still came from coal, oil and gas and another 16 per cent came from burning wood pellets and municipal waste — which is counted as ‘renewable energy’ even though it releases large quantities of CO2.

The environmental problems of electric and hybrid vehicles don’t end there. Many electric vehicles currently rely on lithium ion batteries which require the rare metal cobalt, 60 per cent of which is mined in the Democratic Republic of Congo, often in dirty and atrocious conditions, sometimes involving child labour.

Obviously, petrol engines bring with them their own environmental problems, too, but the point is that plug-in hybrids and electric vehicles are being promoted as ‘clean’.

The truth is that government policy on cars is a mess. Last year, ministers announced a ban on pure petrol and diesel cars from 2030 and on hybrids from 2035.

But many cars will effectively be driven off the road before then thanks to measures such as London’s Ultra Low Emissions Zone which costs most drivers of petrol and diesel cars £12.50 a day and which is being expanded from October beyond central London. Where London goes, others follow.

And the problem remains that while electric cars are improving all the time, how can any of us be certain that the technology will be sufficiently good enough to make them a viable option for motorists who need to make long journeys and who can’t afford the high purchase prices of electric cars — often double that of their petrol equivalents.

History is littered with technologies, nuclear fusion, for example, that never lived up to their promise.

It may be that the future of driving lies not with electric power but hydrogen power. That is certainly likely to be true for heavy vehicles such as buses and lorries — hydrogen versions of which are already in use in some parts of Britain. Hydrogen, when burned, leaves only water vapour — although it does have to be produced, either via the electrolysis of water or from fossil fuels.

Unfortunately, the government’s timetable for phasing out petrol and diesel cars doesn’t leave much time to find alternatives to electric.

As with Labour and diesel cars, the Government has put its foot down and accelerated at great speed without a clear view of the road ahead. I fear it may be forced into a handbrake turn sooner rather than later.

A surge in legislation targeting trans youth “could come at the literal cost of lives,” advocates warn

Who Is Andy Samberg’s Wife? Joanna Newsom Gives Him A Run For His Money Musically