It was already a whisker shy of 30 degrees at 5am in Darwin as servicemen and women began arriving for the ANZAC Day dawn service in the esplanade overlooking the sea.

The heat felled a few good souls before the bugle’s Last Post had played, an airforce cadet and the wife of a sailor among its victims, all but fainting on the grass as their loved ones raced to fetch water as flat-brimmed navy caps were deployed as fans. 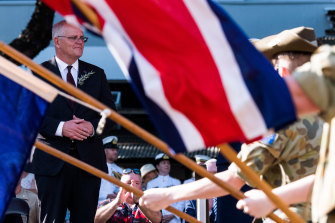 In the dignitaries’ seats, Prime Minister Scott Morrison showed no signs of wilting. His address to the service paid tribute to the sacrifice of the diggers, but also came with a warning of an “arc of autocracy” that was now challenging the rules-based order they had fought for.

“Coercion troubles our region once more,” he said, the subtext surely not lost on the Chinese embassy – or anyone for that matter.

As the sombre ceremony gave way to the ANZAC Day parade, Morrison and Labor’s deputy leader Richard Marles joined the crowds lining Knuckey St in the heart of Darwin’s CBD, acknowledging the troops as the locally-based Australian Defence Force regiments, veterans, and US marines marched past.

That both parties had sent their campaigns to the Territory for ANZAC Day was no coincidence. A garrison town, the city’s tropical, laid-back vibe has long belied its strategic importance to the country’s defences. With national security front and centre of the election campaign amid the looming shadow of China – and the Darwin seat of Solomon resting on a marginal 3.1 per cent – where else would they be? 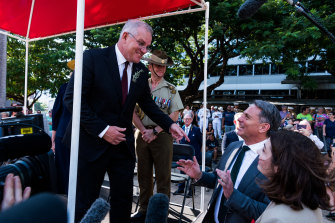 Scott Morrison and Labor’s Richard Marles and Terri Butler at the parade.Credit:James Brickwood

In a brief doorstop with the travelling press, Marles noted the day was the opportunity to “take a break from the partisan contest of our democracy”. But the comments of Defence Minister Peter Dutton on breakfast TV earlier that morning, warning that Australia must “prepare for war” to stare down China’s aggression, proved too tempting a morsel not to bite.

“Words are one thing, action is what matters. And this is a government which repeatedly fails, as it has in its management of relationships in the Pacific, as it has in terms of the sale of the Port of Darwin.”

For Morrison, there was no press conference. Just photos as he pressed the flesh with locals. And these were his people. A sea of white and blue navy and airforce troops and their kids, eager to get photographs with the prime minister. 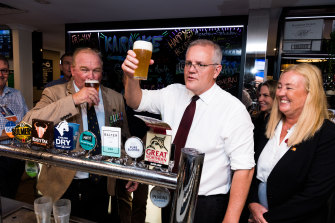 Morrison visited Cazalys Palmerston Club on Anzac Day where he pulled beers for locals and played a game of two up.Credit:James Brickwood

“It’s a beautiful Darwin day, isn’t it,” Morrison remarked, as he sashayed through the parade crowd. It was not intended as a facetious jibe at the Top-End’s oppressive climate, but how was one to interpret it as the mercury climbed to 35 degrees and the humidity skyrocketed?

Crouching down to greet one little girl, he said: “Did you see those US marines? They looked pretty serious.”

“Your name is Scott, too?,” he said, as he helped the young boy fix his Australian Flag that was upside-down.

Morrison has largely avoided crowds during the campaign – the unpredictable punter always one unsolicited character assessment away from stealing the day’s headlines.

And so it was that he swiftly brushed past one voter at the pub who sought to interrupt his two-up media op with a Solomon Islands query.

“What’s your view on helping Ukraine but not the Solomon Islands,” the woman asked.

“We help both,” Morrison responded, before proceeding on with haste.

This Affordable Kaftan From Amazon Is Giving Us Serious Zara Vibes