British farming and food production are a remarkable success story. In recent years, this sector has been at the forefront of a revolution that’s transformed the quality of our food — and acted as a guardian of our countryside.

Through the vision and dedication of our farmers, Britain is increasingly a global leader in animal welfare, environmental protection and high standards of produce. Now all these achievements are at mortal risk. As we prepare to leave the European Union at the end of this year, our impressive agricultural system could soon be wrecked by ruthless competition and a flood of cheap imports.

The most serious threat comes from the U.S., whose vast and unwieldy farming industry is far less regulated than ours.

In the name of efficiency, it has built a highly mechanised, intensive and shockingly cruel approach which keeps animals in conditions so appalling it’s hard for us in the UK to grasp. Meanwhile, an arsenal of chemicals that are banned here are also deployed on these poor creatures.

It is not the sort of produce that should be allowed to swamp our own. When Brexit supporters spoke of ‘taking back control’, they did not envisage the destruction of British farming caused by mass-produced goods soaked in chlorine and cruelty.

In an attempt to prevent this grim eventuality, a last-ditch battle is under way at Westminster aiming to establish essential safeguards in post-Brexit Britain. 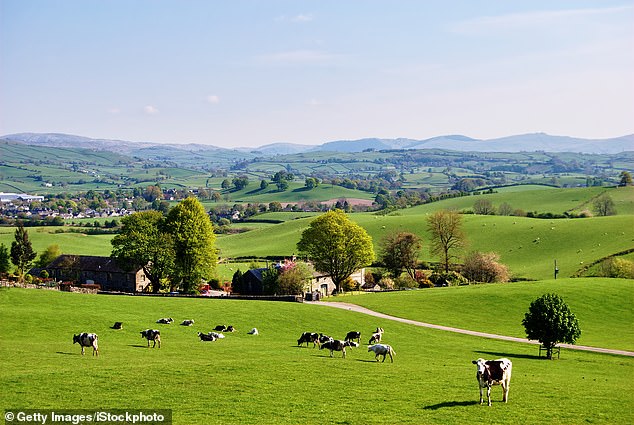 It’s all part of Britain’s deep and enduring compassion for animals. We have 25 million free-range hens here, more than any other country — and more free-range pigs than anywhere in Europe

As the Agriculture Bill — which sets out a new domestic, post-Brexit alternative to the EU’s Common Agricultural Policy — makes its way through Parliament, MPs in the Commons and peers in the Lords have tried to impose amendments to keep Britain’s high standards of animal husbandry and environmental care. So far the Government has rejected all such proposals. Desperate to reach a trade deal, ministers seem unwilling to block the hugely influential U.S. food and agriculture lobby from gaining access to our market.

Their argument is that, in the brave new world of deregulation, consumers will enjoy more choice and, crucially, will have access to ‘cheap’ food. But cheapness will come at a huge cost to our health, our countryside, our rural economy and our animals.

The reality is that choice will be restricted — because British farmers and producers will find it impossible to compete. From the supermarkets to takeaways, this ugly juggernaut of American food will sweep all before it.

The Agriculture Bill is about to go to the final stage of its passage through Parliament. There is one last chance for legislators to stop a free-for-all from which our agriculture would emerge the loser.

As someone who has covered the food industry for 20 years presenting The Food Programme on BBC Radio 4, I am deeply alarmed at the prospect of the advances British food has made in recent decades going into reverse.

Before Covid, British food was flourishing as never before. I think of the surge in high-quality bakeries, of our farmhouse cheeses beating rivals across the world — we produce more than France.

Even McDonald’s UK now uses free-range eggs and organic milk and recently won an RSPCA award for its animal welfare standards. I need hardly say it’s not how McDonald’s operates in the U.S.

It’s all part of Britain’s deep and enduring compassion for animals. We have 25 million free-range hens here, more than any other country — and more free-range pigs than anywhere in Europe.

In frequent talks with farmers, I have been struck by how they see themselves, not just as producers, but as custodians of the land, a vital role they fill with imaginativeness in an age of mounting concern about climate change.

The U.S. farming model is completely different. Its aim is not to work with nature but to dominate it. Industrialised and chemicalised, the entire system is a monument to the denial of biology.

I am not in any way anti-American — I’ve lived across that wonderful country in Indiana, California, Massachusetts and New York. I’m married to an American: my son and his family live in Pennsylvania.

It’s precisely because I visit regularly, and have seen at first hand the harshness of U.S. food production, that I feel so strongly.

The ‘chlorinated chicken’ has rightly become a symbol of U.S. farming at its worst, but few ask why poultry has to be washed in chlorine before it can be sold. It is because the birds are kept in such over-crowded squalor and so pumped with chemicals during their brief, unfortunate lives.

The same applies throughout American industry. Even the British Government’s farming Secretary George Eustice has admitted U.S. animal welfare law is ‘woefully deficient’. Pigs are reared in grotesquely inhumane battery farms. More than 60 million are treated with the antibiotic Carbadox, which promotes growth and is rightly banned in the UK.

Similarly, U.S. cattle are fed steroid hormones to speed growth by 20 per cent — the use of such chemicals has been illegal in Britain and the EU since 1989. And as the cattle are kept in vast confined feeding pens, they need regular antibiotics.

Incredibly, some staff processing carcasses at huge meatpacking plants wear nappies because they are not allowed time off to go to the lavatory. In arable production, pesticides are used on a scale far beyond anything in Britain. In recent decades, the U.S. has banned or controlled just 11 chemicals in food, cosmetics and cleaning products — the EU has banned 1,300. 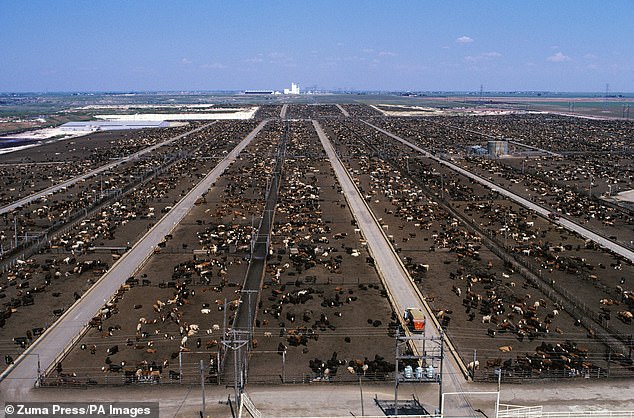 Polar opposites: Cows in a British field, and in beef pens in Texas

In U.S. farming there’s almost no effort to mitigate climate change yet here the National Farmers’ Union is committed to achieving zero carbon production by 2040. What will happen to that commitment if cheap U.S. food floods in?

Environmental devastation and health problems — including disabilities to as many as a million people — were caused in Vietnam by Agent Orange. Is this a road we want to go down in Britain?

The so-called cheapness of American produce is a delusion. These farming methods carry a heavy price in quality and health. A battery chicken is tasteless compared to an organic one, just as factory-farmed salmon has nothing of the flavour of wild.

The coronavirus crisis proved the need for resilient supply lines. But that cannot be achieved if we ruin our own domestic agricultural system and become reliant on imported food.

In World War II, when the survival of the nation was imperilled, the Government attached huge importance to domestic food output, reflected in the propaganda campaign ‘Dig for Victory’ and the Women’s Land Army. We need that collective spirit today.

It would be stupidity beyond measure to obliterate our farming industry for a short-term, unbalanced trade deal with the U.S.

A trade deal without agricultural safeguards would be a calamity for British farming and our prosperity. One in eight jobs in Britain is in food supply, while food exports brought in £9.6 billion to the economy. All that will be lost if cut-throat competition prevails.

And a vital part of our heritage will also be lost. From the robust imagery of John Bull as a yeoman squire to William Blake’s Jerusalem, with its evocation of our ‘green and pleasant land’, the countryside has always held a central place in our national soul. It must not be sacrificed on the altar of illusory cheapness or trans-Atlantic subservience.