NDIS Minister Bill Shorten has vowed to tackle “price gouging” by the scheme’s registered providers as the Albanese government tries to rein in the scheme’s cost, but physiotherapists and occupational and speech therapists are pushing for higher funding.

“When someone has an NDIS package, all of a sudden, the service they’re being charged, the price doubles,” Shorten said. 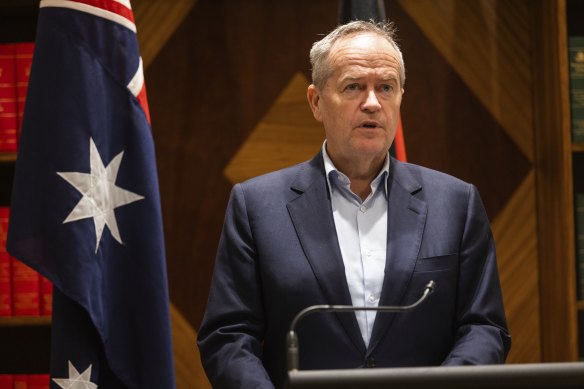 “We want to make sure that money is not getting wasted … we want to stop the price gouging.”

Treasurer Jim Chalmers on Tuesday said the ballooning cost of the National Disability Insurance Scheme – which is forecast to grow from $27.6 billion in 2021-22 to $40.7 billion in 2024-25 – is one of five major pressures on the federal budget.

“We are big supporters of the NDIS. We created it, we want it to succeed and part of ensuring that it succeeds is making sure that we get maximum value for money,” he said.

Chalmers said the government would be looking to ensure that NDIS funding was “better targeted”.

“We want to make sure that every dollar that’s spent in the NDIS is spent effectively,” he said.

“That’s in the interest of everyone who believes in the scheme … We want the NDIS to work for Australians with a disability. We will fund it sufficiently to do that task.”

The NDIS sets the maximum price for each type of therapy delivered through the scheme in a list published each year. Physiotherapists, and occupational and speech therapists get $193.99 an hour, a price that has not risen in three years.

Allied Health Professions Australia is pushing for the NDIS prices for members to rise in line with 6 per cent inflation in 2022-23 – a change that would cost taxpayers more than $210 million extra a year.

Australian Physiotherapy Association President Scott Willis said most physios were “charging appropriately” even if NDIS participants paid more, arguing this was to cover the extra paperwork, the cost of registering as an NDIS provider and the more complex nature of the work.

“You’ve got to look at what they provide,” he said.

“A bigger space, different equipment. You often can’t have other people in the area, because of the concentration of the participant. Sometimes you’ve got to have an assistant with you, to help transfer participants. Or they cancel late because their carer hasn’t shown up.”

Speech Pathology Australia’s senior disability advisor Amy Fitzpatrick, a speech pathologist who is herself an NDIS participant, agreed with the minister that participants are often charged higher amounts and the question was whether this could be justified in the particular case.

“As soon as somebody finds out that you have NDIS funding, they up their prices,” Fitzpatrick said.

Providers charge NDIS clients anything from 30 per cent more, to double their usual fee.

For example, Fitzpatrick said, a speech therapist might charge $140 an hour for someone paying out of their own pocket, but “when you get onto the NDIS, will charge you $194 an hour, just because you now have government funding”.

She says equalising prices could result in higher fees for non-participants, rather than saving the NDIS money.

The speech pathology peak body advises members to be transparent about their pricing and the reasons for any differences, such as registration costs.

“It may be legitimate,” she said.

“Sometimes when somebody has a complex disability, you have to do a lot of research and you have to really plan for their sessions and maybe do a lot of advocacy for them.

“The bottom line is, you have to always let the person know right in their service agreement and get the person’s consent. You can’t just spring it on them.”

Shorten has said he wants the NDIS to be seen as an investment rather than a “line item” in the budget, pointing to modelling showing that every dollar spent on the scheme delivers $2.25 to the economy.

There are 4.5 million people with disabilities in Australia but only about 530,000 are on the NDIS.

Shorten also hopes to save millions of dollars in legal fees by resolving thousands of cases in the Administrative Appeals Tribunal where the former Coalition government was challenging NDIS claims.

There were 4500 cases when the Albanese government was elected in May and 1500 have been settled. Shorten aims to resolve the remaining 3900 claims by Christmas.

“The money that we save will be reinvested in a better participant experience,” the minister said.

He called on state governments to step up and better fund disability support for children in schools and provide community mental health support.

When You Feel Comfortable Eating Alone In A Restaurant For The First Time, You Learn 5 Things

Black Friday: Last chance to get £40 off the sellout Always Pan from Our Place

Inside Anne Hathaway's Wickedly Awesome Wardrobe for The Witches