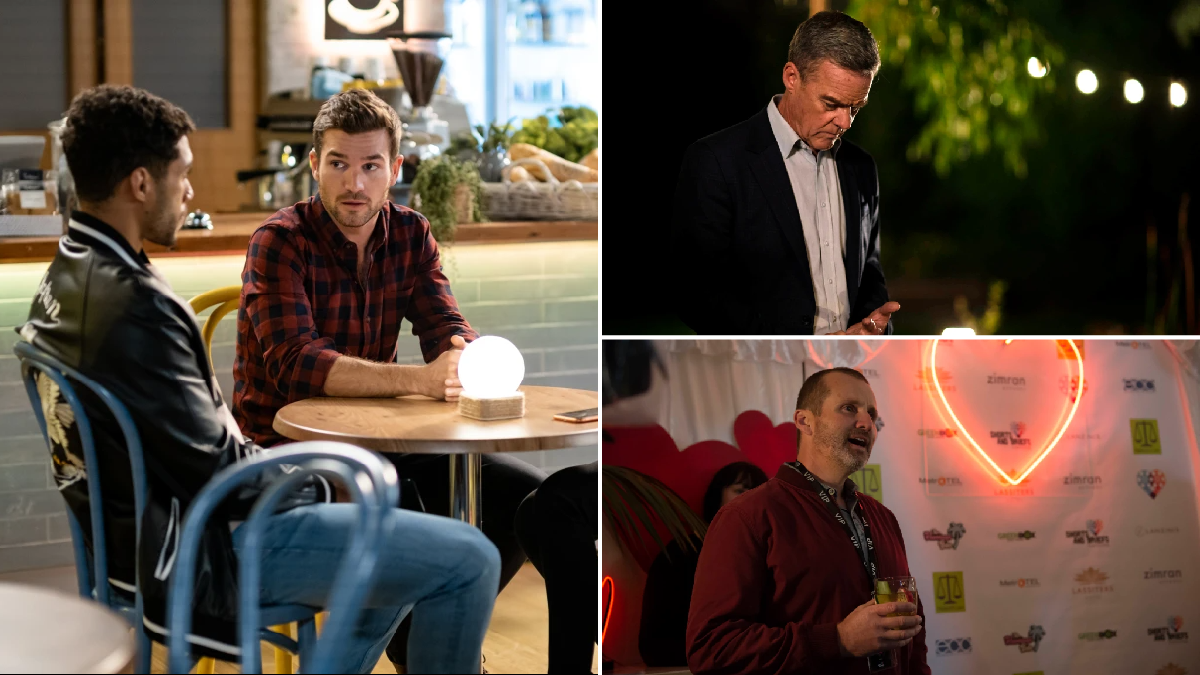 There’s angst in store for the Neighbours this week as fears are confronted, accusations are made, and one couple has to learn to let go.

Aaron (Matt Wilson) and David (Takaya Honda) face the most heart-breaking task that no new parent ever expects to face – having to say goodbye to their baby. With their relationship already fragile, how will they cope with this emotional test?

Hendrix (Benny Turland) is having an equally tough time but for a very different reason. After his test for prostate cancer, he convinces himself that he is dying. He struggles to cope with this and begins acting out, but will anyone realise what’s wrong?

In a bit of good news, there seems to be a light shining on the darkness that is Toadie (Ryan Moloney) and Mel’s (Lucinda Cowden) relationship. Can these two finally work things out? Hopefully, as she’ll need his support when she’s hit with an unsavoury accusation.

Here’s what’s ahead in Neighbours.

A couple becomes a thruple

Amy is moving into her new place and is excited to celebrate with her boyfriends, but the pair totally let her down and she ends up on her own for her first night in the flat. They feel bad about it and decide to make it up to her by throwing a housewarming, but their lack of event planning skills results in no one showing up. Amy is left gutted again, so the lads come up with a new plan that involves just the three of them – and Amy’s bed. But the gossip gets out when Sheila learns the two lads stayed over and she doesn’t keep it to herself. She blabs it around town and it gets back to Amy, who is left seriously uncomfortable about her sex life becoming a hot topic. Is the thruple over before it’s even begun?

Mackenzie senses something is up with Hendrix but he won’t admit what. He’s going off the rails, and all because he’s convinced himself he’s dying of cancer despite not getting the proper results. Will Mackenzie be able to get through to him?

Things have been rocky for Mel and Toadie, but one small gesture from her could be enough to save their romance. Nell hits Mel with a seriously awkward question, and Mel jumps into action without a second thought, dealing with it like an absolute pro. Toadie is totally impressed by her quick thinking and looks at her all googly-eyed again. Cupid’s struck them for a second time, can they finally make things work?

There is a casualty of Hendrix’s downwards spiral – Roxy. As Susan and Karl try to convince Hendrix not to drop out of school, he decides to block them out by going out on the town with Roxy. But as his out-of-hand fun escalates, Roxy gets pushed to the ground and ends up with a twisted ankle. Kyle is furious and rips into Hendrix who, under enough emotional pressure already, snaps and confesses what’s really been going on.

Mel might be in Toadie’s good graces, but she’s about to be in Karl’s bad books. When he can’t find the film festival prize money she promised she’d left on his table, he is quick to accuse her of slipping it in her back pocket. Outraged at the accusation, Melanie lets him know how disgusted she is. The air suddenly turns very cold between these two.

Aaron and David spend their first proper chunk of time with baby Isla and it doesn’t go well. She won’t settle and they can’t seem to bond with her. Frazzled, they both realise that they might not be able to do this after all. Later, they hear Abigail crying at the Willis house where Terese is babysitting, and they’re compelled to pay a visit. Terese has a drama at the Waterhole she needs to get to, so they offer to help and find themselves easily spending time with the little girl. But when Leo and Britney return and find them with the baby, they are not best pleased.

They decide it’s time for them to move on and learn to navigate their new parenting roles away from Ramsay Street – so Aaron and David are faced with having to let Abigail go.

They comfort each other as they say their sad goodbyes, but it’s set to put another strain on the pair.