Home » Lifestyle » Stacked to the rafters

Years ago, I was sued for defamation by a prominent ALP politician for broadcasting allegations that he was an eager participant in and organiser of branch stacking.

The problem was well known within the ALP and a “source familiar with the details” had provided me with specific examples. 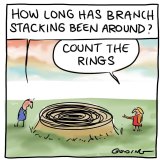 Annoyingly, after we were sued, my informant could no longer recall any of the events about which they had previously been so certain. I had to make a grovelling apology on air and the ABC made a token contribution to the politician’s legal costs.

Branch stacking has been in the DNA of the ALP for as long as anyone can remember. In the heady days of the ALP/DLP split in the 1950s, the then rampant process was called “branch packing”. For decades, it helped keep the different factions of the left and right in rough equilibrium, with occasional eruptions. Not anymore.

Numbers mean power. Power to place delegates on committees, to control pre-selections, to reward favours and punish enemies. Occasionally, when the power plays pause, the weight of numbers is even used to influence actual policy.

For decades, under the guise of welcoming people from diverse backgrounds, the artful ethnic stack has been the speciality of different champions from the Greek, Italian, Maltese, Latino, Vietnamese, Indian, Middle Eastern and Turkish communities. 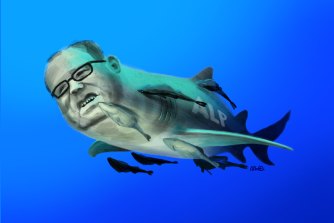 Adem Somyurek as a shark with several remora in tow.Credit:Matt Davidson

Some ethnic-based branches conducted their business in community languages, ostensibly as a salute to multiculturalism, but also as a way of excluding outside scrutiny. In many municipalities, local government has been used as a training and recruitment base.

More than a decade ago, the ALP rules were changed to prevent stacking. That led to a new bureaucratised process, but it did not end it – perversely it simply clarified the methodology and thus increased the power of the factional warlords. They became gatekeepers, drunk on power, arrogant and unaccountable – particularly former minister in the Andrews government Adem Somyurek, now under investigation by IBAC.

Ambitious minions hung around the factional bosses waiting for rewards like pilot fish at the mouth of a whale. Some of those have lost their jobs – Robin Scott, Marlene Kairouz and now last week aged care minister Luke Donnellan had to resign as well. 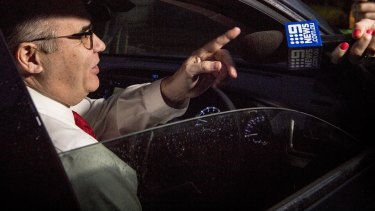 IBAC does not exist to investigate breaches of the ALP rules any more than it investigates the internal affairs of, say, the Collingwood Football Club, where a power struggle is under way. But where public funds have been abused, then the corruption busters must get involved.

The “red shirts” affair was investigated by the state Ombudsman in 2018. She found cheating on an industrial scale but no criminal offences. The resultant intervention by the ALP federal executive saw payment for memberships with cash banned, and an audit of branches which became a purge and saw thousands of “members” culled from the books.

Does any of this ensnare the Premier? He is no stranger to factional brawling, indeed is the product of it. But when this masthead has to explain under the headline “Who Is Luke Donnellan?” we can see how distant these manoeuvres are from the lives of the voters.

Opposition Leader Matthew Guy last week did a passable job of seeming to be indignant about branch stacking while pretending it was not a problem within his own ranks. For years now the Victorian branch of the Liberal Party has been juggling its own internal feuds.

Political crusaders inspired by the American religious right initially tried to project their faith into state and federal parliaments through a device called Family First. The new political party got Steve Fielding elected to the senate in 2004 on less than 2 per cent first preference votes, but they could neither maintain their vote nor preference deals, and he served but a single term.

Since the collapse of Family First, conservative Christian activists visited their affection on the Liberal Party instead. Old-style Liberals are appalled and deeply resent the attempt to hijack their brand. Reform is a work in progress. Federally, the religious influence in the Liberal Party is undeniable.

The state opposition seems to call for Dan Andrews to resign every second week, and on cue did so again last week. They need to beware “boy-who-cried-wolf” syndrome. If there is any evidence that the Premier has broken the law or rorted taxpayer funds, then their call will be amply justified. No such evidence has come to light.

And have any of the Liberals or their media chums who said ICAC should not investigate their friend Gladys during a pandemic also said IBAC should shelve the investigations in Victoria during the pandemic? Not that I have seen.

Wherever it occurs, branch stacking must be stamped out. It rewards unethical behaviour, encourages a contempt for rules and fairness, breeds cynicism and deters idealists from being involved in party work.

Will Dan Andrews legacy be a cleansed ALP? Or will he handball the problem to the next generation?

Jon Faine is a regular columnist. He has worked on contract for the state government.