Home » Lifestyle » ‘The answers they deserve’: Julie Bishop on the MH17 verdict

Julie Bishop says the conviction of three pro-Russian separatists for their roles in the downing of Malaysia Airlines flight MH17 will give families the answers they deserve, but it’s unlikely the murderers will be jailed.

Bishop was Australia’s foreign minister when the Boeing 777 commercial jet was shot down over eastern Ukraine on July 17, 2014, killing all 298 people on board including 38 Australians, and personally confronted Russian President Vladimir Putin over the incident in October that year. 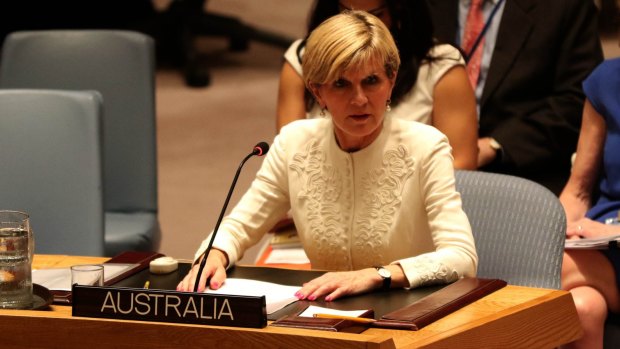 Then foreign minister Julie Bishop delivering a statement to the UN Security Council in New York in 2015. A vote for a resolution on the downing of MH17 was vetoed by Russia.Credit:Trevor Collens

Both Bishop and Foreign Minister Penny Wong concede it is unlikely the three men sentenced by a criminal court in the Netherlands overnight will be extradited and have to serve jail time for their actions.

“I think they [prosecutors] have done an extraordinary job, but of course Russia will refuse to hand over these men, who are former Russian soldiers. It’s unlikely they will go to jail in the current environment but things can change, and the possibility of extradition will hang over their heads for the rest of their lives,” Bishop told this masthead.

“There could be a circumstance in the future where they are brought to account for their actions.”

Recalling her confrontation with Putin, Bishop said he “listened to what I had to say about the evidence and Russian involvement, but he continued to deny it”.

Wong, who paid tribute to Bishop’s “tireless and effective advocacy on behalf of Australians”, said it was inevitable that Russia would refuse to extradite the three men.

Directly addressing Russian authorities, Wong said “these people are murderers, and you should ensure that they face justice”.

“Nothing will bring the people who were lost back but we can ensure that the world knows the truth and that legal responsibility is attributed and that is what has happened today.” 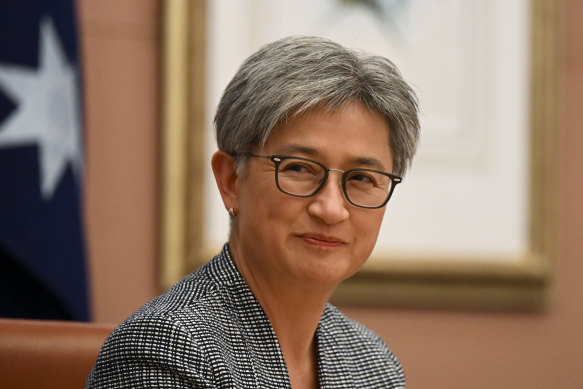 Foreign Minister Penny Wong, who paid tribute to Julie Bishop’s “tireless and effective advocacy on behalf of Australians”, said it was inevitable that Russia would refuse to extradite the three men.Credit:Getty

Russian nationals Igor Girkin, Sergei Dubinsky and pro-Moscow Ukrainian Leonid Kharchenko were each found guilty of murder and unlawfully causing the crash of the aircraft, having helped to arrange and transport a Russian army BUK missile system into Ukraine that was used to shoot down the plane. The three men all received life sentences in absentia after refusing to attend the 2.5-year trial.

Bishop spent years as foreign minister pursuing justice for the families who lost relatives on the plane, including leading a push at the UN Security Council – alongside her counterparts in the Netherlands, Belgium, Ukraine and Malaysia – for the United Nations to establish an international criminal tribunal to prosecute the perpetrators.

At the time, Bishop spoke openly about how she regularly received text messages from victims’ families, urging her to “keep fighting for justice”.

That push failed after Russia used its veto. Looking back, Bishop says that moment was “not a surprise but a massive disappointment”, however, it led to a Dutch Safety Board investigation and a joint investigation team that finally, led to prosecution.

And for the families of those who lost loved ones, Bishop said the guilty verdict hopefully “gives them the answers they deserve and a sense of justice”.

“It won’t bring their loved ones back but at least they have answers about what actually happened, who was involved and why.”

The Maslin family lost three children, Mo, Evie and Otis, and their grandfather Nick Norris when the airliner was shot down.

“I’m still in contact with the Maslin family, even again this morning, I think of them often, they were in my local community, they were members of my electorate and the story of the Maslin family kids and their grandfather resonated around the world and underscored the senseless nature of this incident, along with all the other families,” Bishop said.

She also paid tribute to the Australian Federal Police, who were involved in the investigation into the incident from August 2014.

Has the pandemic seriously affected your finances? There is help available