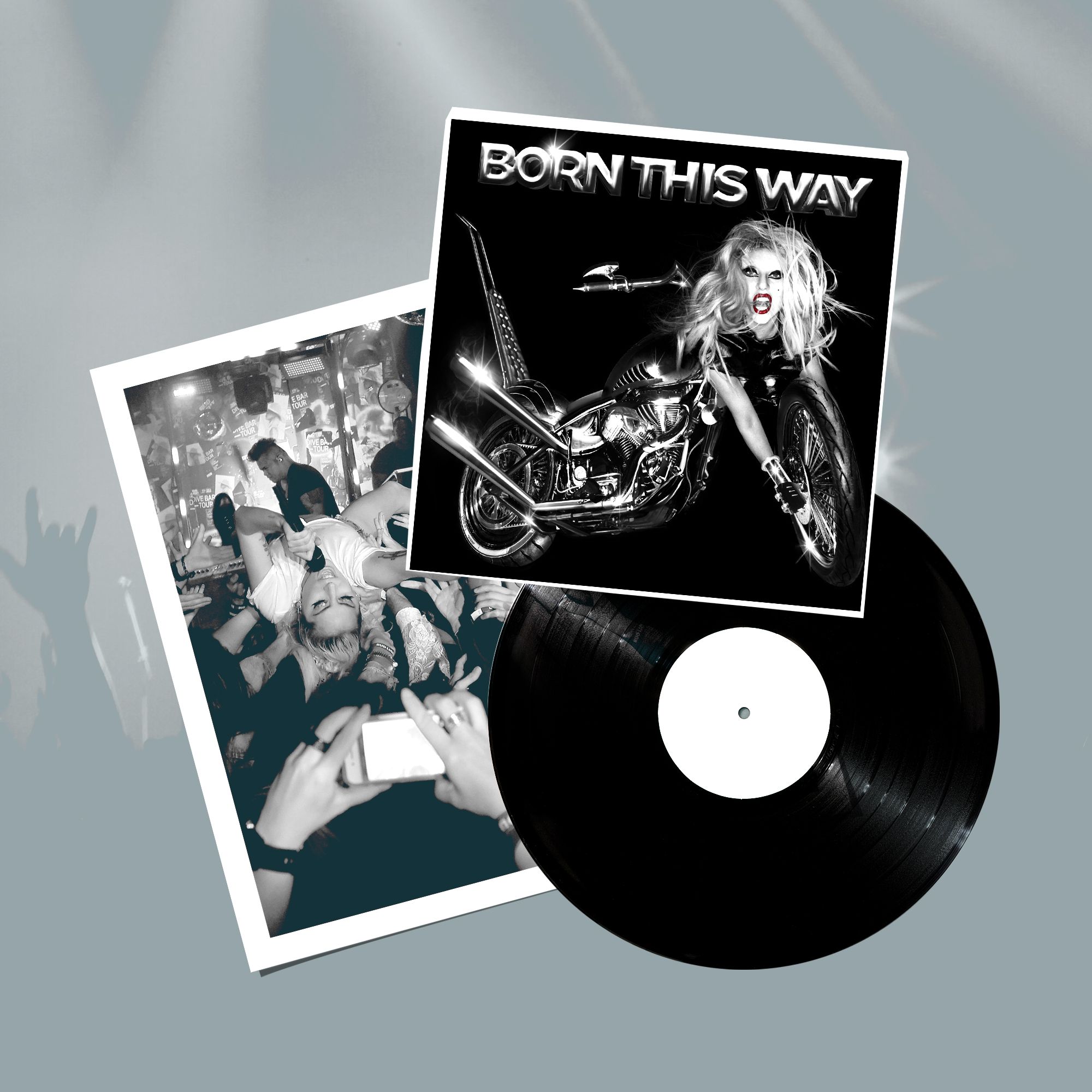 In 2011, Lady Gaga’s album Born This Way marked a new era of queer music and performance. Released during the pop diva’s prime after her smash-hit album The Fame and its reissue EP, The Fame Monster, Gaga’s second studio album was highly anticipated and sold more than one million copies in its first week. For me, a 21-year-old woman whose desires for other women were locked away beyond my reach, Born This Way ignited a journey of self-discovery that broke open the heterosexual world I thought I belonged to.

Up until that moment, Gaga’s music and videos had explored the theme of fame and the effects of hypervisibility on her own body and psyche—but with Born This Way, she openly expressed her love for the intersections of performance, fantasy, and identity, solidly establishing herself as an eclectic and imaginative artist. “There isn’t a subtle moment on the album, but even at its nuttiest, the music is full of wide-awake emotional details,” read a Rolling Stone review at the time. Over on Slate the writer named the album’s obvious queer themes in a review titled “The Gaga Rapture,” a reference to the song and video “Judas,” which was released during Easter that year: “In these songs, Lady Gaga draws on a tradition of camp that extends from drag queen cabaret to Broadway and disco. Gay men are Gaga’s core constituency and, not coincidentally, her cause; for Gaga, activism and careerism are one in the same.”

Lady Gaga openly expressed her love for the intersections of performance, fantasy, and identity

Though Born This Way is widely remembered for the song in its title—a somewhat cliché pop single that leans heavily on the idea of self-acceptance as empowerment—the album itself is more interested in fantastical performance, storytelling, and earnest vulnerability. Yes, Born This Way is a pop record, but it is also a manifestation of the seductive artifice of the weird in the context of queer self-discovery. In these songs, Gaga’s retellings of the painful moments of her life are full of exaggerations, both musical and visual. It’s as if she is analyzing the events of her life and reframing them through a queer lens, straddling reality and fantasy in favor of a more transcendent rather than static version of the truth.

The term queer commonly refers to sexual orientation, but I am in favor—like many queers before me—of a more expansive definition of the word. Because queer people already transgress heterosexuality, queer culture has a tradition of reimagining other norms and aspects of society beyond sexuality. Being queer and expressing queerness is inherently about challenging and reimagining the way things are. Under this definition, leaning into fantasy and infusing your painful memories with glitter, fashion, and drama through artistic expression is quintessentially queer.

Being queer is about challenging and reimagining the way things are.

On the record, there is a sense that reality is up for debate; it is available for transformation and reconfiguration. In “Marry the Night,” Gaga tells her own story of queer failure through a blend of gospel and pop that concludes with an elaborate and fashionable narrative of victory over her detractors. In “Judas,” she inserts herself into a Christian narrative of betrayal to express heartbreak over a traitorous man, implying that her heartbreak is at least as sacrilegious as the betrayal of Christ himself—to the despair and outrage of Christian commentators at the time. In “Americano,” she narrates a whirlwind romance with a woman in a dramatic accent and an ever-accelerating melody that feels both like the rejection of society and a broken heart. And in “Hair” and “Bad Kids,” she solidifies what Gaga scholar Samantha Cohen calls the assertion of “performance as identity,” a challenge to the assumption that we are only our bodies, and that makeup, fashion, and wigs are frivolous and simply external expressions of femininity.

All these delusions—internal and external—are articulations of how flimsy our reality is. And particularly for Gaga’s queer listeners, in how our reality is premised on the invention of heterosexuality. While the single “Born This Way” was criticized at the time for connecting biology to being born queer (and for the patchy racial politics that are so common in white queer art), the rest of the record insists that we can be whomever we want to be regardless of realities and pasts that seem immovable.

Listening to Born This Way as a 21-year-old with nascent feelings for women and other genders was life changing in a way that is only apparent 10 years later. Today, the record is a reminder of my queer self before I even saw myself as queer. I was someone who was fascinated by the strange, fictitious reality Gaga constructed for herself, but hadn’t quite connected that fascination to the fictitious reality of heterosexuality I was constructing for myself. “My reaction to Born This Way was a catalyst,” says Felipe, a fellow queer Gaga fan. “Every new song showed me I was far away from cisgendered ideas of romance. It moved me. The more I unshackled myself [from heteronormativity], the more I started seeing Gaga’s production with different eyes.” In 2021, I view heterosexuality itself as a fantasy.

Gaga’s retellings of the painful moments of her life are full of exaggerations.

Through the glittery and rebellious tradition of camp, Born This Way invites listeners to question whether the ways we live are really set in stone and whether we could imagine something better for ourselves. Questioning the “solid” truths we are raised to believe—that men date women, and women date men; that our stories must be tied up with what actually happened rather than embellishment; that femininity is firmly just for the male gaze—the album caused the structure of my (heterosexual) dreams to collapse in favor of something more imaginative and free. My bisexuality was not something I was born with; it was something I cultivated and grew into through persistent questioning of the norm.

In 2021, I view heterosexuality itself as a fantasy.

This questioning also shows itself in Born This Way through Gaga’s diverse use of genre. By unceremoniously tethering pop to opera, heavy metal, disco, house, and rock and roll depending on her artistic whims, Gaga moved away from the prescribed formulas of pop she had been previously known for. For the queer listener, these musical transgressions and the defiance of the record as a whole might translate into a potential new world. In conversation with fellow genre-bending pop stars like Madonna, Elton John, Prince, and Freddie Mercury, Gaga refuses to bind herself to a single category of music. Itt isn’t surprising that the pop music tradition of transgressing genres is attractive to a queer audience. This kind of pop music is an artistic expression of certain aspects of queerness, a kind of expression that says, “We can go beyond these tired boundaries we were taught are right. We can make beauty out of strangeness.”

In regard to the music and performance of Gaga specifically, queer theorist Jack Halberstam argues in his book Gaga Feminism: Sex, Gender, and the End of Normal, “Gaga feminism is a gender politics that recognizes the ways in which our ideas of the normal or the acceptable depend completely upon racial and class-based assumptions about the right and the true. Gaga feminism will abandon the norm the way a hiker might throw out her compass—once the compass has been lost, every direction is right, every path seems attractive, and getting lost becomes both a possibility and a pleasure.”

I was someone who was fascinated by the strange, fictitious reality Gaga constructed for herself

When Born This Way arrived a decade ago, I dated men and still believed in a heterosexual future; the songs on this record were my only connection to my own queerness, which I would discover and embrace years later. When I cut off most of my hair in my late 20s in an act of rebellion and rejection of the heterosexuality that had trapped me for years, I put on Gaga’s “Hair,” and when she sang, “Whenever I’m dressed cool / My parents put up a fight,” and “I just wannna be myself / And I want you to love me for who I am,” my years-long affair with Born This Way and the comfort it provided me during my heterosexual years locked into place.

Born This Way is seen by many commentators as the beginning of the end of Gaga’s pop reign—it was during the tour for this album that Gaga became injured, marking the start of a downward spiral that would end with the release of the widely misunderstood ARTPOP. Despite this, 10 years later, Born This Way still stands as a markedly queer pop production, one that provided me and many other queers with a transcendent view of reality I haven’t quite been able to shake.

Royal Expert Believes They Know Who Made A Remark About Archie