Women are approaching parity in sports at both the college and professional levels—as athletes at least. Off the field, women in sports careers—coaches, trainers, agents, sports broadcasters, producers—are much more rare. “Very rarely did I see more than maybe one or two other females in the production truck besides myself,” says Kaitlyn Urka, a producer for NBC Sports. “I always loved working with them and we always would talk like, ‘Oh my gosh, we hope to get to work together again.’ It's scary sometimes if you're a female and you're in these trucks by yourself—it can be intimidating to look around and think, Oh my gosh, I'm the only woman here right now.”

She knew there were dozens of talented women already in the ranks at NBC Sports. Visibility— the kind of culture-shifting power that comes from getting women together in the room where it happens—was the issue. That’s when an idea started percolating—wouldn’t it be amazing if they could all work together to produce the first all-female sports broadcast in history?

The idea sat on the back burner of Urka’s brain until she had a conversation with AJ Mleczko, a former professional hockey player, Olympian, and current inside the glass on-air analyst for NBC hockey. During the Stanley Cup Finals, Mleczko had taken her 15 year old daughter with her to work one day. She took her inside the production truck ready to score cool mom points. Instead, her daughter had a question: Where were all the women?

“We have the women—talented women—who can do this.”

“AJ texted me almost immediately and said, ‘Kaitlin, this is what my daughter said, please, please, please don't stop working hockey. You have to keep chugging along because we need people like you to keep doing it so that we can have more women,” Urka says. “The sad part for me is that NBC has a lot of really talented women—it just so happened that she picked the truck where, you know, we were all somewhere else on the road that night and she just didn't get to see it.”

This time, the idea for an all-female broadcast stuck.”I thought, I have a responsibility to find a way to get these women together and to get us some more visibility. So that people like AJ's daughter who are thinking about their futures, know that this is something they can do,” Urka says. On International Women’s Day, the Chicago Black Hawks would play the Toronto Blues and every key position on the crew—the producers, the director, the in-studio hosts, the analysts, the play by play caller, even the teleprompter operator—would be a woman.

“It was really important to us that all of the women involved already worked hockey,” Urka says. “We didn't want to just pick women for the sake of picking women. We wanted to make sure that everyone that was on the team was one of the best at what they did and did this on a regular basis. This wasn't just, we're going to bring you in and have you do this job just because you're a female. We have the women—talented women—who can do this.” 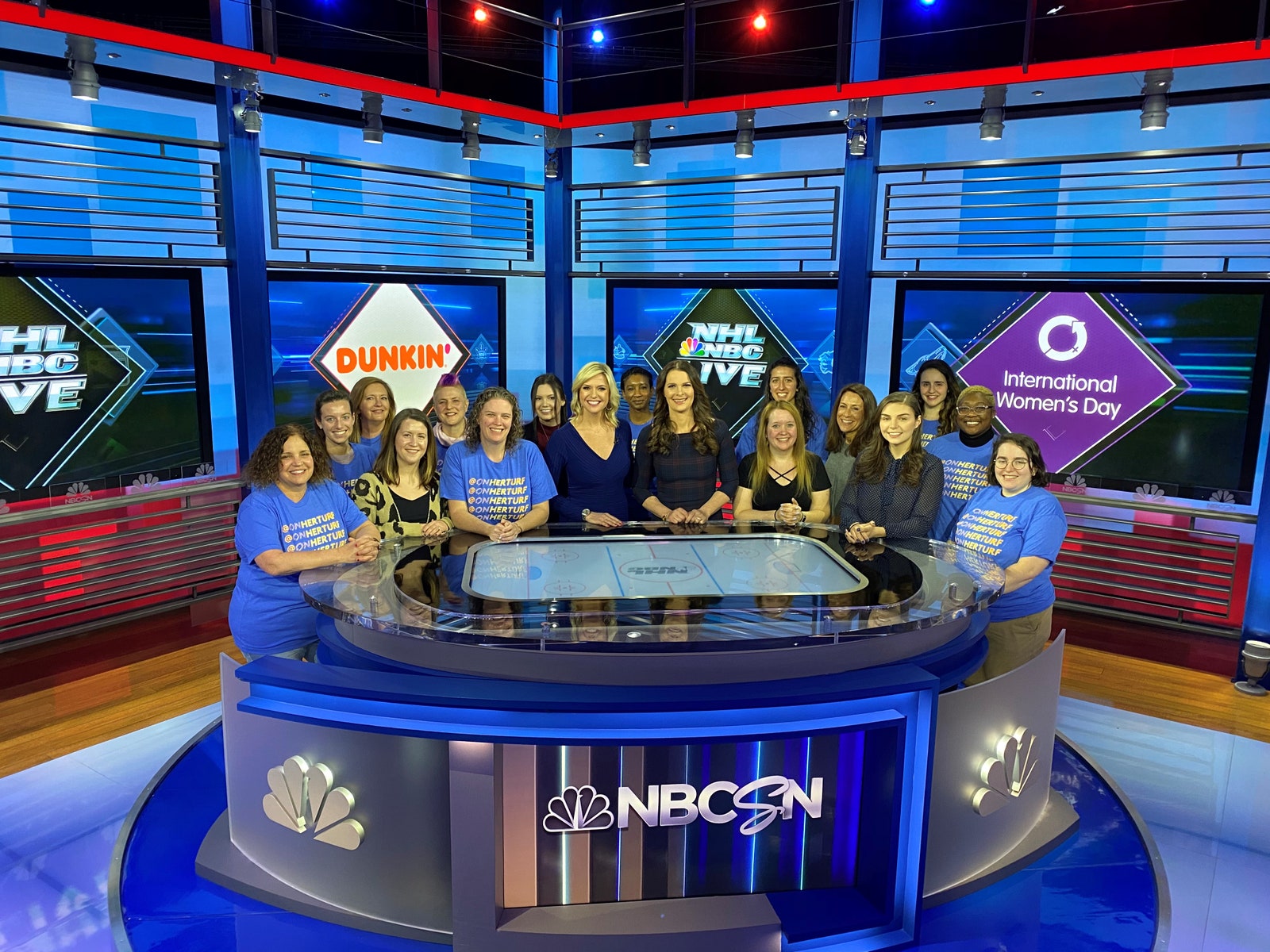 The studio crew before the historic International Women’s Day broadcast.

Here, the women behind the historic broadcast share their memories of the day, what inspired them to join the team, and how they hope the first-all female sports broadcast will create more space for women in sports. 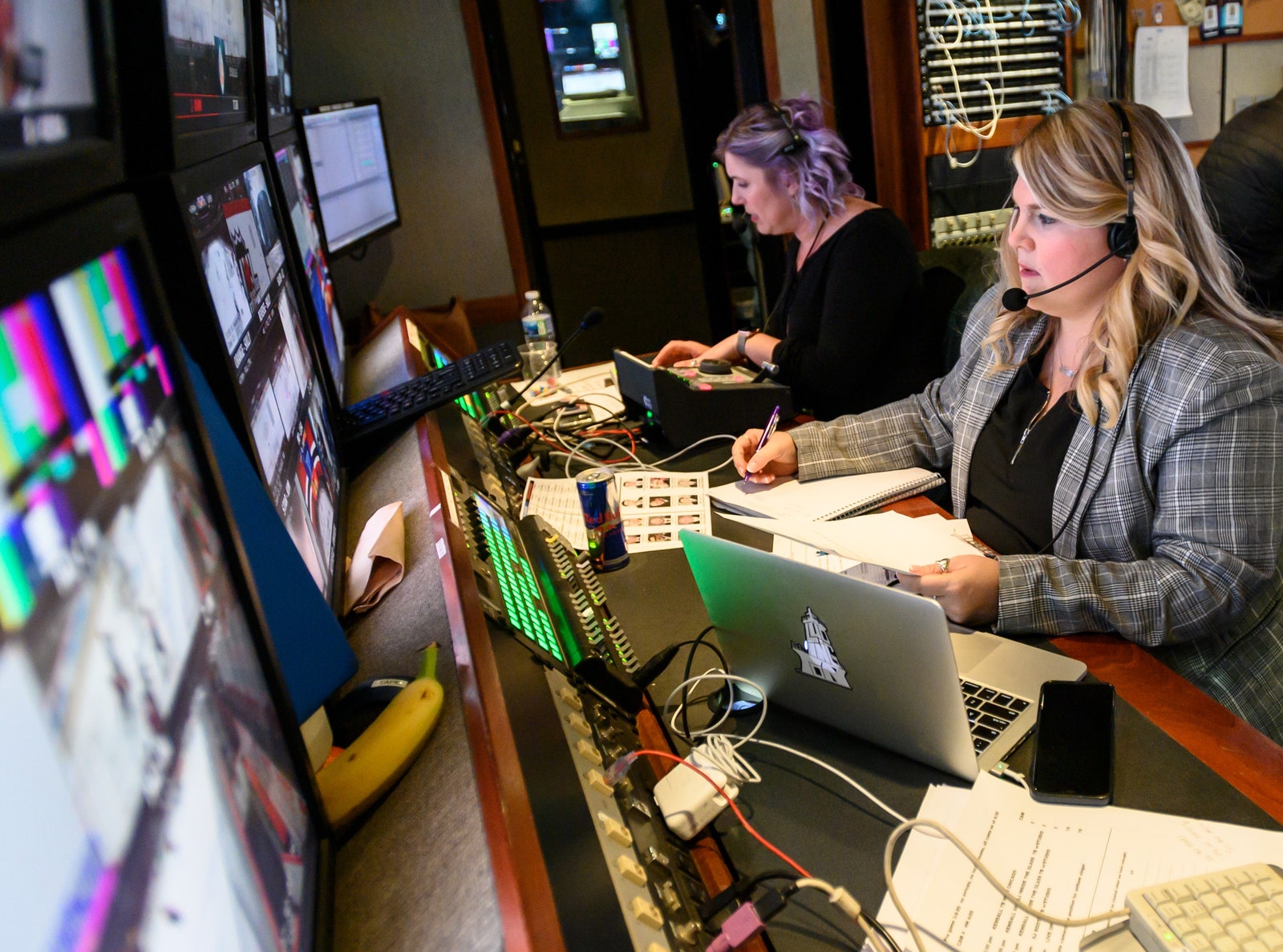 Urka on set on the day of the broadcast.

This broadcast was important to me because I know how I personally struggled with deciding to go into this industry because I didn't get to see women in various positions. I only ever got to see Robin Roberts, Andrea Joyce, Tracy Wolfson on my TV—I never got to hear names of powerful females as producers or directors. So it felt like those were the only opportunities. If you didn't want to be that on-air personality or sideline reporter, there was no space for you to cover sports. I wanted to make sure that we had these amazingly talented women in all of these positions so that a little girl watching could say, I don't want to be on air, but I really want to work in this industry. And I can. I want little boys growing up to hear female voices and not think of that as odd or different. We want them to hear a female calling play by play and saying, yes, that is normal because she's great at it.

I think everyone understood that the job they were doing that day was going to be far more important than any other broadcast they worked on. During our rehearsals, we were playing a girl power playlist—there was just an excitement and everyone knew that day that they were a part of something bigger than themselves. The goal is that this broadcast will impact and change the entire industry and the sports world for many years to come, because it will show people that these women are talented and able and willing and excited and enthusiastic about being a part of these broadcasts and will be an incredible asset. 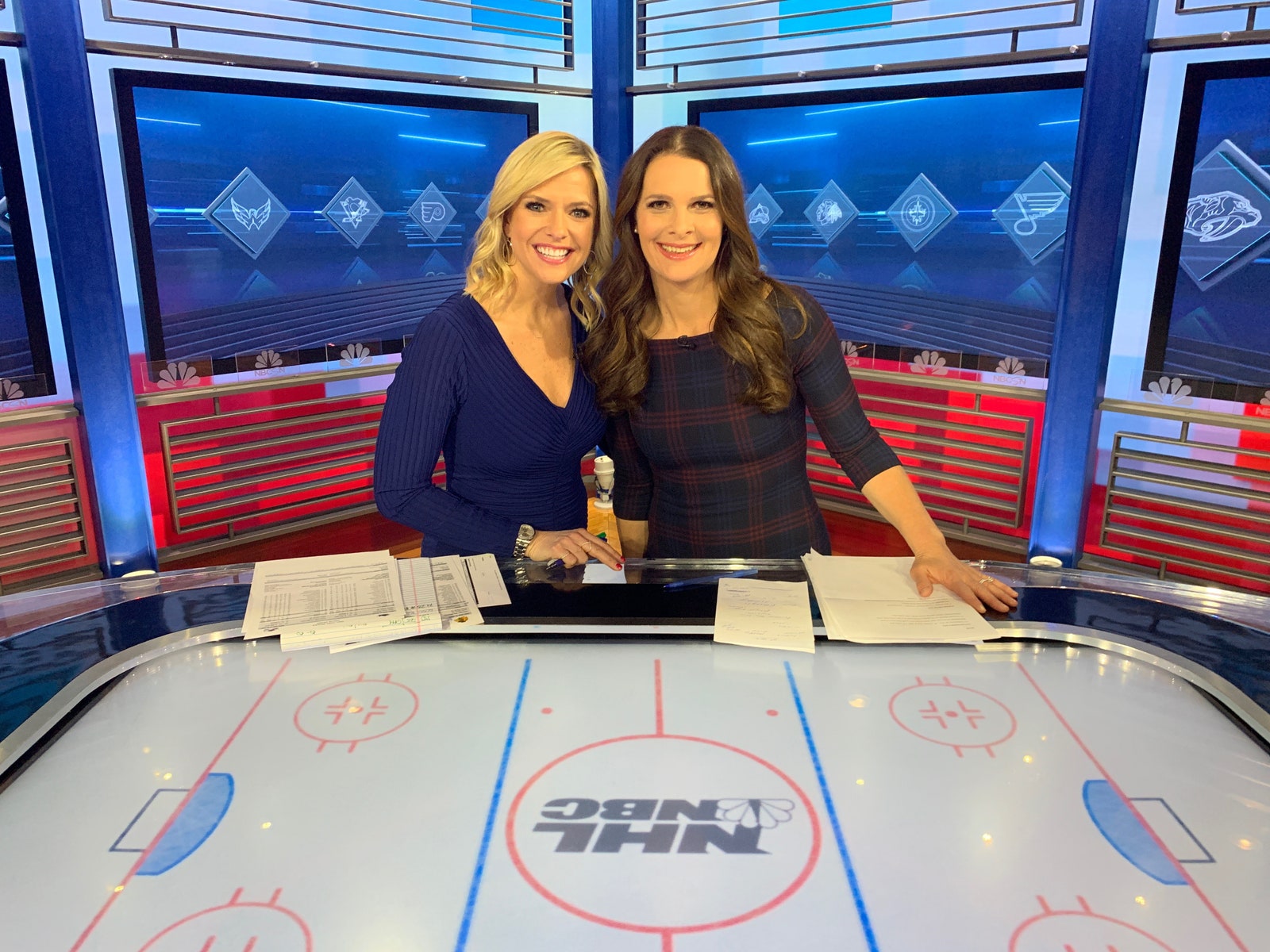 I think this broadcast really uplifted the entire group at NBC—the men and the women. I remember the buildup to this game the week prior, I was really surprised by it. I was getting media calls and people wanting to interview all of us in anticipation. I arrived at the studio on Sunday and it was weird because, you know, I do this every single night and I'm used to it, but there was something different walking into the studio that day. It almost felt like a Superbowl—you just knew the moment was bigger.

I wanted to take a big team picture on the set that day and out comes Stephanie Taylor, who is my stylist and does my wardrobe every day—she was so proud. And out comes Brenda Hancock, who's our teleprompter operator—you never get to tell her how great she is. We brought everybody together on set for this picture and they were so excited and so proud to be there. You just got the sense that this was doing something for everybody there because they were finally being highlighted. They were being recognized.

I remember coming on the air with the broadcast team and I had tears in my eyes. I was so choked up just knowing that everybody was so excited about this. It went really far for people's morale and for their enthusiasm for the jobs they do. We were just proud, you know? People were, asking me, “Can you text me that picture? I want to show my mom. My husband is going to want to see this.” This broadcast meant showing everybody that we can do this and we can do it as a team.

AJ Mleczko, Inside the Glass Analyst 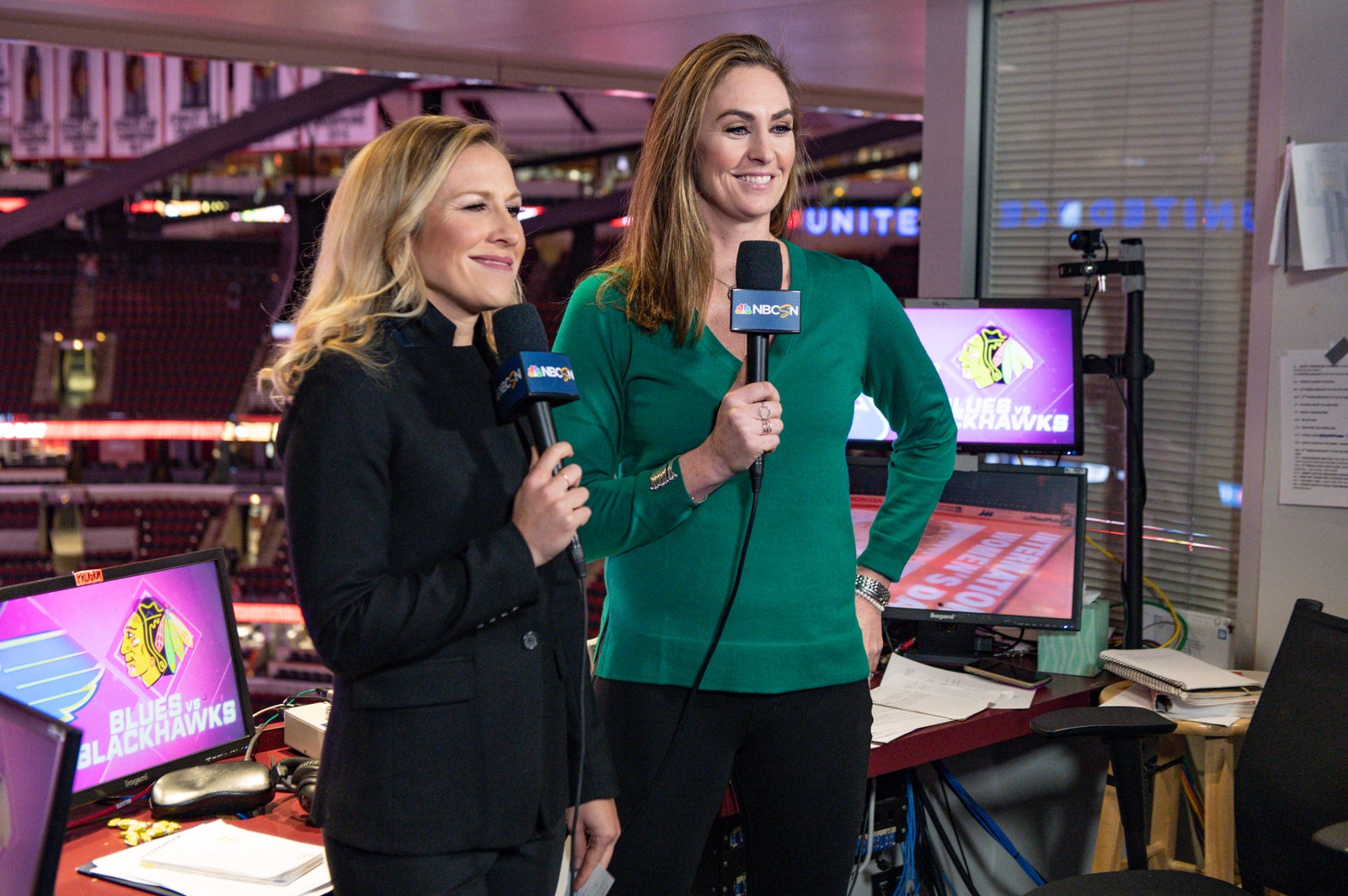 I hope that we're getting to the point where it's no longer important to do something big like this—that it's becoming the norm and we don't have to celebrate it the way we celebrated on International Women’s Day. That was sort of the impetus for this broadcast—if we do this and we celebrate, it will show people and show the next generation, Hey, look at us, we're out here, we're doing this.

This wasn’t a novelty. Like “Oh, look how cute this is on International Women's Day—let's get a bunch of random women and see if they can string together some sentences about hockey.” No, this is what we do. And good on NBC for having a pretty deep bench of women to pull from. 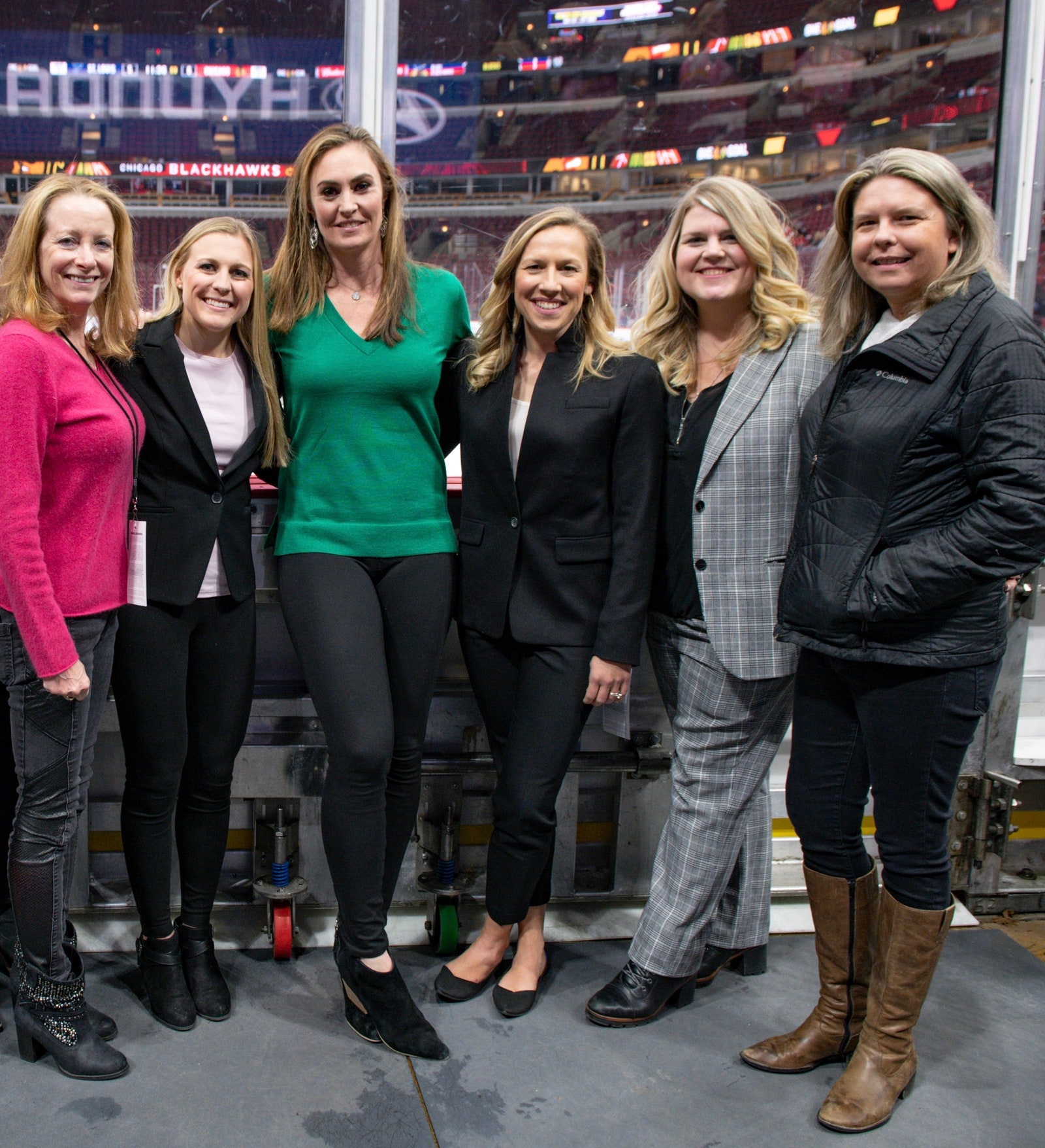 I’ve been retired for more than a year. But my former boss called me and I thought, Oh isn’t that nice. What could he possibly need? He said they were going to do a game on International Women’s Day and they’d like me to direct. The only reason I would ever come out of retirement is to promote women in the industry. So I said yes, I didn't even have to think about it. I couldn't be prouder of everyone who worked on that broadcast. Everyone already had an A game, but everyone stepped it up to an A plus game—and that's rare.

When I started in the business, ESPN was probably a year or two old—I got out of college with the advent of cable TV. I started my career as a runner, running Cokes and hot dogs to the production truck. So could I imagine a broadcast like this ever happening when I started? No. you don't ever envision it, you just look at the next step—you don't look at how high the ladder actually is.

There was a spotlight on us being an all-female crew. Everyone worked 10 times as hard as they usually do. The energy in the production truck and in the booth was like lightning in a bottle. Usually you walk in a truck and it's like, Oh, here I am. But when we walked in the truck, it was like Wow, we're really here together. It was so positive and everyone worked so incredibly hard to make sure the final product on air was amazing. I have never worked on a broadcast where beginning to end everyone put in so much effort. 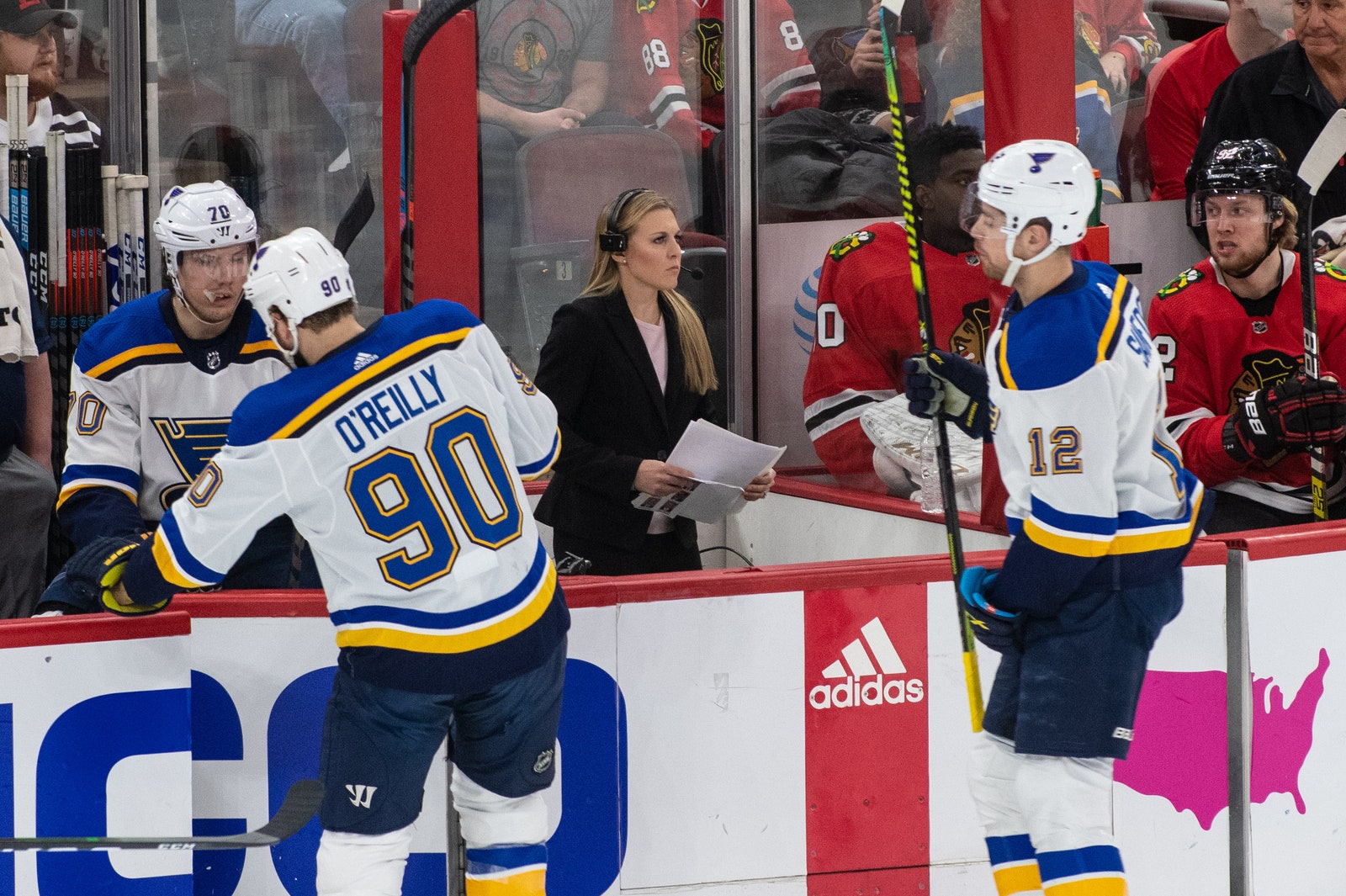 Coyne Schofield analyzing the game from the ice.

It is hard to get your foot in the door, but once you get the foot in the door, you run through that door and you don't look back. That's exactly what this broadcast showed—how incredible all of these women are and how their jobs are more than just a one off thing, more than just a box to be checked. These are women that have been doing this for years and years. It shows the growth of women in this industry. It shows the fight a lot of women have fought to create more opportunities.

We need our culture to give women in sports a chance to succeed, to be believed in and to be invested in equally. If we don’t fight now, it's not going to change for the future. It's exhausting to constantly fight, to constantly put your foot down, to constantly try and implement change. But when you look at a little girl and you see her and her love of sport, you want to change things.

Macaela MacKenzie is a senior editor at Glamour covering wellness and women's equality in sports.

Paul Routledge – Brexit takes us across the border into a nightmare