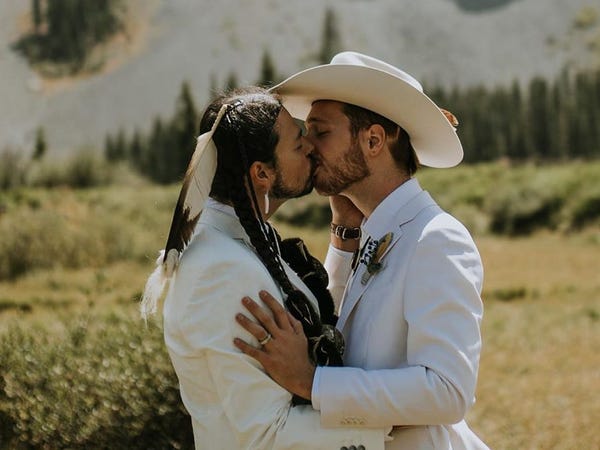 The Colorado mountain air was crisp on the morning of Cody McCook-AhTave and Turner Free-AhTave's wedding. The two grooms, each staying in separate cabins, woke up early to write their vows and get ready for the special day.

McCook-AhTave's mother and sisters helped braid his hair and place his eagle feather, a custom in Native American traditional regalia reserved for significant moments in one's life like graduations and weddings.

In the other cabin, Free-AhTave was placing Bolo ties on his grooms-men as a nod to his rural, western upbringing in Wyoming and centered himself by doing his mother's hair, a last-minute request by the groom (who is a hairstylist) to help him decompress.

The two grooms were set on blending their cultures into their wedding to represent where they had come from and where they were going together, a unique ceremony captured by photographer Shelby Annemarie, and featured in Out Magazine's July/August edition.

"I think the biggest thing for us on our wedding day was making sure that we both felt fully represented because it truly was a representation of where we came from in order to get to that place," McCook-AhTave told Insider.

Insider spoke to the two about their special day, their love story, and how navigating race in their relationship has been in 2020.

Blending their cultures came organically and easily for their wedding, like in their relationship

Though everything in their wedding seemed very intentionally planned, McCook-AhTave and Free-AhTave told Insider the cultural elements of their wedding came together really organically.

Their special day wasn't the first time the two had spoken about their upbringings. Throughout the time McCook-AhTave and Free-AhTave had first started dating, McCook-AhTave, who is biracial and part of the Ute Indian Tribe, made it a point to bring his then-boyfriends to pow wows — a traditional gathering held by Native American tribes.

"I first told him that I loved him at a Native pow wow and I just thought it was so beautiful, the energy there was incredible," Free-AhTave told Insider. "The fact that he was willing to share that vulnerable side of his life with me was just so cool."

McCook-AhTave said that he was aware white people can feel uncomfortable in spaces that are predominantly people of color, and he was really touched in seeing how Free-AhTave interacted with his community at pow wows.

"It was just really great for me to be able to find a partner who was able to balance that and kind of like respect the culture and ease himself into it and not necessarily just appropriate the culture," McCook-AhTave told Insider.

Their wedding was only reflective of their ongoing cultural sharing.

A traditional Ute blessing was performed at the ceremony in honor of McCook-AhTave. The reception that followed was Western-themed, a nod to Free-AhTave's upbringing.

Even the little details of the special day that became metaphors for the two's blended relationship like Free-AhTave's cowboy hat and McCook AhTave's mocassins.

Free-AhTave discovered his own culture in planning their wedding

Turner Free-AhTave had struggled to figure out exactly what his culture was through the process of planning his wedding. His then husband-to-be was deeply involved in his Ute community and very much valued his Native traditions.

"I was a little bit lost throughout that process in finding what my culture was," Free-AhTave told Insider.

But once family and friends were gathered in front of him for the ceremony, located in Ute ancestral land in Colorado's San Juan Mountains, Free-AhTave said he had his "ah-ha" moment.

"I saw it standing in front of all of the beautiful people that traveled to another state for us," Free-AhTave told Insider. "My mom pointed it out and she said, 'This is your culture, baby.'"

They have very different personalities, but they click on a deep level

Though both Scorpios (the couple has strong feelings about astrology), but McCook-AhTave and Free-AhTave say they have very different personalities.

"As I was driving to the ceremony with like my best man and a couple of the people that were in my wedding party, we were like jamming out to like AC/DC and I was like doing shots of whiskey in the car," McCook-AhTave recalled, laughing. "Turner, on the other hand, was needing to stop the car and get out and meditate and breathe."

Regardless, the two make it work and support each other artistically and emotionally. Quarantine has meant a lot of creative projects for the two, painting, drawing, and even a bit of piano-playing for McCook-AhTave.

It's been two years since the two were married amongst their closest family and friends, and the world is vastly different. Warped by a pandemic disproportionately impacting communities of color and protests against police brutality, race has become a dominant topic on everyone's mind.

As an interracial couple, McCook-AhTave and Free-AhTave have always talked about race and culture.

"For me, being a biracial person and being a person of color, I have a responsibility to my community as well to continue having these conversations, especially when they're really hard," McCook-AhTave told Insider.

However, the conversations he has been able to have have been impactful.

"My 80-year-old grandfather showed up and it was so beautiful. He was on the mountain and I had the conversation with him about Black Lives Matter and, and he kinda got it," Free-AhTave said. "I guess you can teach an old dog new tricks."

If you have a POC or interracial love story to share, Insider wants to hear it. Email Canela López about your relationships at [email protected]

Interracial couples on how they're talking about race, love, and Black Lives Matter: 'The conversation took a far deeper meaning'

Tracey Cox reveals the lessons we can learn from Europe