When you're a young woman walking alone in public, it's not unusual to have a slight feeling of anxiety. The threat of street harassment, like catcalling, is never far away, whether it's at the beach or on public transport.

For Tyler, 22, street harassment was something she became aware of from the age of 13. "I can remember going for walks with my dog and being catcalled. Which would make me feel intimidated, obviously," she told SBS Life. So when she agreed to participate in an experiment for SBS documentary Is Australia Sexist? examining instances of street harassment, she wasn't surprised at the results. 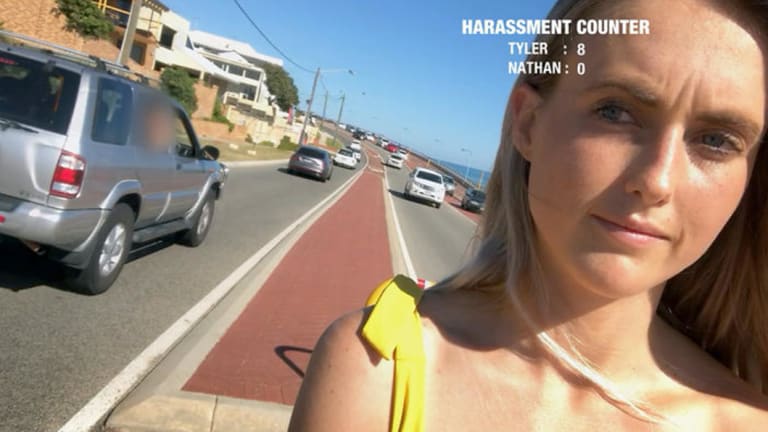 Tyler was cat-called eight times in as many minutes.

Standing alongside the road side at a busy Perth beach, Tyler recorded how many times she was catcalled from passing cars. Filming the interactions, under the premise that she was taking a selfie, Tyler was catcalled eight times in as many minutes. Her male counterpart, Nathan, was catcalled zero times.

"I wouldn't say I was surprised," Tyler told SBS Life. "It was what I expected unfortunately, which is quite disappointing."

The catcalls ranged from simple car honks, unintelligible yells to one particularly vulgar request of, 'get your tits out for the boys.' There was also a range of ages of the men in the cars, including two men in their 50s. "They're older than my dad and they're tooting at me," Tyler said during filming of the experiment. "It's never when females are in the car. They're never doing it in front of their sisters and mothers."

According to Dr Catherine Lumby, academic and co-author of the Is Australia Sexist? survey, men feel emboldened to catcall from the safety of the car. "The car is a safe space for them to do it so they can keep driving," she explains in the documentary. "The idea is that well, [Tyler] is on public display so she's fair game."

Tyler tests this theory further in a second experiment for the documentary, looking at harassment facing women walking down the street, where she confronts a man who comments on her legs. "It was definitely confronting," she said. "Especially because I was by myself and they made me feel like I didn't have a right to speak up because they played it off as a compliment."

Turns out, the men Tyler confronts in the documentary are not alone. According to survey results, 22 per cent believe wolf-whistling is a compliment. "I would love to ask them this question- would you wolf whistle some one in front of your wife? In front of your daughter?," Tyler asks. "If it’s such a compliment would you wolf whistle your daughter's friend? I have no problem with a stranger giving me a genuine compliment but calling out a window to a young girl when she is by herself is intimidating – not flattering.

"The fact they think they have a right to do that regardless of how it will make the women feel is just wrong."

Is Australia Sexist? premieres on SBS on Tuesday December 4 at 8.40pm. The show will also be available to stream on SBS On Demand. This article was originally published on SBS Life.