Last week, my normally quiet morning coffee was rudely interrupted by sounds my ears continue to punish me for. Across the road, parked outside the local primary school, was a 30-something hipster dad. His daughter was hauling a backpack bigger than her out of the rear door, while he belted out the remainder of a tune they’d been listening to together.

“I want to be where the people are. I want to see, want to see 'em dancing!” he crooned. While absent any musical talent, his performance was undeniably magnificent. It was delivered complete with accompanying facial expressions and hand gestures. Dad wasn’t pretending to be the Little Mermaid – he had become her. Walt Disney himself would have been proud. 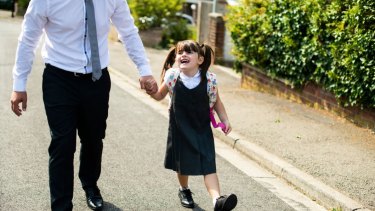 To the dad belting out The Little Mermaid at school drop-off.Credit:Shutterstock

Disappointments abound in this gendered world of ours, with progress moving all too slowly on sexist stereotypes that limit our kids. New research from Victoria University reveals that only 17 per cent of kids’ books on the Dymocks bestseller lists have female protagonists.

Toys "meant" for girls are still coded in pink by marketers; Lego has even released a pastel range because apparently building stuff needs to be "girl-i-fied". Boys are rarely bought toy dolls, let alone plastic babies to care for. Major department stores place "Future NASA scientist" T-shirts in the boys’ section but the "Daddy says I’m cute" jumper is, apparently, just for girls.

Consciously or not, this society of ours continue to raise girls to be liked and boys to be respected. So much of our kids’ behaviour is the result of role-modelling that parents rarely pause to unpick and unpack. Gender stereotyping our children is behaviour that requires specific un-learning. It is, after all, how we adults were programmed to be when we were children.

I’m guilty of gender-stereotyping myself. At my kid’s fourth birthday on the weekend I shouted upstairs to the "boys" and cautioned them against rough play they were engaging in. Minutes later, I checked myself upon realising that the group included a bunch of girls. And they were the ringleaders.

Ultimately, these narrow expectations make for unhappy adults who lead lives according to what they’ve been told, not what they genuinely desire. Finding ways to free ourselves and our kids from these stereotypes is a major challenge for parents of my generation. It’s one I hear discussed by mums a lot but, sadly, only occasionally by dads.

Nonetheless, there are blokes out there who are making positive change.

And, perhaps, there are more than we give credit to. So, here’s a shout out to the dads who defy stereotypes, in honour of the bloke parked at school drop off who was rocking out to Part of Your World.

To the dads I see at AFLW games, watching from the sidelines with their little ones and cheering for mighty female athletes who were denied professional opportunities only a few years ago (bonus points for the dads who take their sons along, proving that a sporting role model doesn’t have to share one’s anatomy to be a hero).

To my mate who told me he stays up late watching YouTube tutorials on hair braiding so he can impress his daughters. The same guy who is a regular customer of the living room hair salon, and proudly parades his new styles to the supermarket, sparkly clips and all.

To the uncles without children of their own, who throw themselves headfirst into the lives of their nieces and nephews. The uncles who, a generation ago, would never have been expected to take an interest or get involved.

To the godfathers who organise trips to the zoo, the museum, the swimming pool and the theatre. The ones whose enthusiasm never ceases and who push back at suggestions that Frozen is "a girls movie" or that trucks are "just for boys".

To all the blokes re-making masculinity as they go along: I thank you, on behalf of my kid.

To the grandfathers who teach empathy, who play make believe and don’t reduce their contribution to the odd lightsaber battle. Ones like my father-in-law who steadfastly refuse to play traditional "shooting bad guys" games and instead send those villains off to court for "justice" and then jail to be rehabilitated.

To the dads, like my partner, who show their kids that care and compassion aren’t feminine traits but human ones. It is because of him my own little boy will grow up knowing that to be a devoted, loving father is absolutely a defining part of masculinity. He will know that being a man is bigger and broader than what the media and consumer culture tell us it should be.

To all the blokes re-making masculinity as they go along: I thank you, on behalf of my kid.

A Step-by-Step Guide For Packing the KonMari Way

Morrisons to increase staff bonus from £350 to £1,050 to say thanks for hard work during coronavirus – The Sun