Too busy, too tired or it’s that time of the month? That’s no excuse! Tracey Cox reveals why avoiding sex will RUIN your love life – and her tips for getting in the mood in any situation

If you wait for the perfect conditions for sex, you’ll never have it.

There will always be times when life gets in the way of you having a good time and if your sex life is otherwise healthy and the situation is temporary, the best solution might well be to put sex on the back burner for a while.

But if the frequency of sex is waning, the excuses for not having it are winning – and you’ll be the loser.

Keep letting these ‘It’s not convenient right now’ situations stop you connecting with your partner, and you will eventually end up having no sex at all.

Sex is a habit: effort is required to keep things fresh and feisty!

Here’s how to get things moving again. 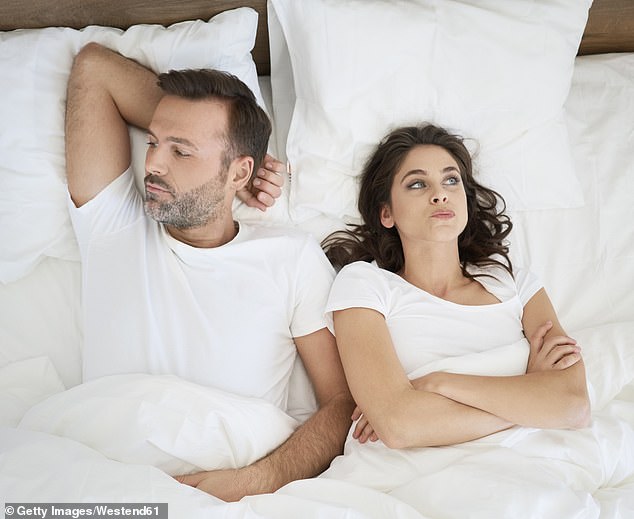 If your sex life has hit a wall because you think you’re too busy, you’re often too tired, or you’re worried about logistics like being interrupted, Tracey Cox says you need a rethink (stock image)

Seventy five percent of couples say lack of time is the biggest frustration in their sex life.

Answer one question, and you’ll have your answer: How much time a day do you spend on your phone?

Surveys in the UK and US suggest the average person spends between two and five hours a day (not including working).

Now tell me you have no time for sex.

You might be time poor but you’re probably not out of it completely.

All will ensure you’re ready to pounce in the short amount of time you do have free. Apply the same efficiency you do to the rest of your life: what gets you both hot and bothered fast?

Tracey says there’s rarely a valid excuse to let sex dry up, you just need to get creative

YOU’VE GOT YOUR PERIOD

There’s no need to avoid sex during your period and lots of women find their desire for sex peaks at that time.

In fact, there are advantages to having sex then.

Orgasms can relieve menstrual cramps because it causes the uterus to contract and release. They also trigger the production of endorphins, chemicals that dull pain and make us feel happier.

There’s evidence sex during your period could make it shorter (the uterine contractions that occur during orgasm push out the lining your body is trying to remove faster).

Solution: OK, so we know the downside to all this – the mess. And possible squeamishness from your partner.

Deal with that first by being honest and upfront about having your period. Trying to pretend you haven’t and crossing your fingers there’s no evidence, isn’t on. Some people are totally cool with the idea of period sex, others not so much.

If they aren’t too worried about the mess, reduce it by having sex in the shower. Or put down a dark-coloured towel and have a wet flannel or wet wipes handy by the bed. Position wise: if either of you are squeamish, spooning works well because you can’t really see what’s going on.

If you’re planning on receiving oral sex, leave the tampon in and push the string to one side (or use that menstrual cap!). Otherwise, take it out before any type of penetrative sex to avoid it being pushed high into the vagina and forgotten about.

Two other factors you need to consider: the risk of passing on an STI like HIV or hepatitis is higher during your period. A condom will help reduce this risk. You might want to pop one on for contraceptive reasons as well: it’s unlikely you’ll get pregnant during period sex but not impossible.

YOU’VE GOT A HEADACHE

Personally, if it’s a bad one, I’d fall at the first fence. Who wants sex if your head feels like you have 800 six-year-olds with drum sets inside?

There is evidence that migraines and cluster headaches can be relieved by having sex (so long as it leads to an orgasm). It’s those endorphins again: they’re a natural pain reliever and orgasm triggers their release.

But there’s also research that suggests sex can make headaches even worse – or even trigger them.

I’m not guilting anyone into trying to dodge sex in this scenario, being a headache wimp, but if you did want to see if it helps relieve it…

It worked out well? Give it a go with your partner on the proviso that if it makes the headache worse, you’ll stop.

This isn’t the time for trying out that wacky Kama Sutra position that has you upside-down, stick to positions where you make the least effort and there’s little movement. Try them on top or sideways sex, from behind.

This is one session when you really should lie back and think of England: your partner takes responsibility for providing the orgasm, you get to relax and enjoy. If you feel like you want to rally but not for long, opt for your most tried-and-tested route to orgasm.

YOU’VE GOT A HOUSE FULL OF GUESTS

Plenty of couples got creative while granny stayed in the spare room during lockdown, so it’s entirely possible to sneak in some hot sex sessions with a house full of guests this Christmas.

You just need to be a little inventive.

Solution: Suggest afternoon naps: few people will say no to some quiet time when staying at someone else’s house. If no-one takes you up on that offer, have sex in the mornings in the shower. The noise of the shower covers any moans and groans (though keep it simple, it’s slippery in there!).

If you have an office, tell everyone you don’t want to be disturbed and get your partner to bring in you in lunch. There’s just enough time for a quickie on the desk. Better still, invent a reason for a private Zoom call for both of you and lock yourselves in there for half an hour.

If you’re determined to do it in bed and the mattress creaks, put your pillows and duvet on the floor. If the floorboards are even noisier, stick to the bed and opt for a 69er over intercourse.

YOU’VE JUST HAD AN ARGUMENT

Some people need time to recover from an argument, others create one just to have some lusty make-up sex.

Our bodies flood with hormones like adrenaline and testosterone when we fight, making all senses feel heightened and alert.

If it’s a particularly bad row, you’ll set off the ‘fight or flight’ response: a term that represents the choices cavemen had when faced with dangers. They could either fight the wild beasts or flee.

If you’re busy, tired or need to fit in a quickie before you’re interrupted, here’s to to orgasm in just five minutes!

Use lube. It’s a must not a luxury. Lube makes even the most boring caress feel kind of sensational. It also stops sex being painful.

Switch stimulation. If something doesn’t feel right within a minute, try something else. Alternate between tongues, hands, penetrative sex, toys.

Do it yourself. No-one is as expert at giving you an orgasm as you are yourself. If you’re finding it hard to tip over the brink, finish yourself off and suggest your partner does the same. It doesn’t mean you aren’t good lovers, just that DIY gets a quicker result.

If you’re feeling hyped and jittery even after the argument is resolved: it’s not surprising your brain suggests sex as a means of getting some happy chemicals to flood your system and make you calm again.

Solution: If you’re diving into make-up sex to avoid a thorough discussion needed to solve the argument, don’t go there. But if you’re craving closeness and intimacy, frightened you’d lost each other, go right ahead.

If you’re both quite fond of make-up sex, you won’t need me to tell you to keep it primitive. Anger-fuelled sex is selfish sex – you take from each other rather than getting caught up in worrying if they’re enjoying it. It makes for better sex, ironically. Tempestuous couples often have more satisfying sex lives for this reason.

If you’re both feeling bruised and vulnerable, make it face-to-face so you can make soul-searching eye contact.

One or two drinks makes you more adventurous, three or more can make orgasms elusive and erections unreliable.

But even if we’re talking bottles not glasses, there is a way to make the most of the alcohol-induced lack of inhibition and deal with his inevitable wobbles.

Solution: Start the session by sharing some sexual fantasies or confessing something you’ve always wanted to do but were too scared to admit.

Let that take you wherever it leads you and if that’s intercourse and you feel him losing his erection, get into a position where he’s on top. Gravity will work in his favour, keeping all the blood in his penis rather than draining out of it. Even better, get him to wear a penis ring to trap the blood in the chambers of the penis.

If his penis is too soft for intercourse, opt for a sexy mutual oral sex session instead by turning a 69er on its side. Each of you rest your heads comfortably on each other’s thigh.

This is often up there with the ‘You’re too busy’ excuse. If you’re able to find the energy to call your friends or watch Netflix, it’s not valid.

If you have three kids under three, you definitely qualify and can hang up your sex heels for at least a year. For the rest of you…

If you’re really knackered, give into sleepy spoons for intercourse but if you want to create energy, put yourself in the driving seat – literally – and jump on top.

Just as a 20-minute walk will do more for low energy levels than a power nap, so will being active in bed rather than lying back.

Looking for a great present for your partner this Christmas? You’ll find budget and luxury ideas in Tracey’s two product ranges, Supersex and Edge. Find them at traceycox.com or lovehoney.

5 Resolutions To Make With Your Partner, Because 2019 Is Your Year

Retirement is threatening our 40-year marriage