If you ever needed evidence of how confident the Andrews government is of winning the next election, today’s budget was proof. 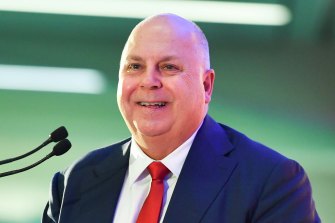 Treasurer Tim Pallas during the budget lock-up up on Thursday.Credit:Joe Armao

Next year the state government’s tax revenue will increase by 13.2 per cent with an average annual increase of 6.9 per cent over the forward estimates.

Justifying its tax grab, Mr Pallas said he was simply asking Victorians who had done well out of the pandemic – successful businesses and those lucky enough to hold on to their jobs – to help those who suffered the most. It’s a strong argument.

There is little doubt the system is broken and in desperate need of repair.

But introducing a new levy on big businesses to fund a whopping $3.8 billion investment in mental health over four years has its risk.

The budget papers predict population growth will remain lower than pre-pandemic levels until at least 2024, probably longer. Public demand and government spending are effectively the only positive contributors to Victoria’s growth. The government needs consumer and business confidence to remain high.

There is a risk that taxing aspirational property investors, developers and businesses with $2.4 billion in new taxes on higher-value properties will curb the rapid growth of the past six months.

The government cannot ignore the rising debt and challenging economic circumstances it is in following last year’s economic shut down.

Then there are the political risks. This budget has the potential to hand the Coalition – at both the state and federal level – a political weapon ahead of two elections due before the end of next year.

Bill Shorten learnt the hard way how a high-taxing agenda can be used to run scare campaigns, particularly in marginal seats.

At a state level, the Andrews government holds 55 of the 88 seats in the lower house to the Coalition’s 27. That gives it wriggle room. Labor now represents affluent suburbs like Hawthorn, Sorrento and Surrey Hill and this budget suggests they don’t necessarily care if they hold them.

Their comfortable position means they can lose a few seats and remain in government.

But federal Labor was planning on running a small target election campaign and avoiding the class battles that dominated the last federal election.

After the 2016 election, Bill Shorten harboured animosity towards Daniel Andrews over concerns the firefighters’ dispute cost him Victorian seats. Anthony Albanese, an ally of Daniel Andrews, will be hoping the Premier’s tax grab doesn’t hurt him in the same way.

Neptune Retrograde Is Ending, so Let Your Intuition Light the Way