Tyson Fury’s wife Paris has revealed the heartbreaking moment he told her he was ‘not coming back’ before nearly killing himself.

The mother-of-five, who has been with the heavyweight boxer since she was 15, emotionally recalls her husband’s mental health battle in a new ITV documentary, Tyson Fury: The Gypsy King.

Set to air at 9pm on Thursday, the three-part series follows the former world champion, 31, as he details his struggles with depression.

Speaking on the programme, Paris recalls the terrifying moment Tyson told her: ‘I’m not coming back,’ before driving his Ferrari at 190mph towards a bridge. 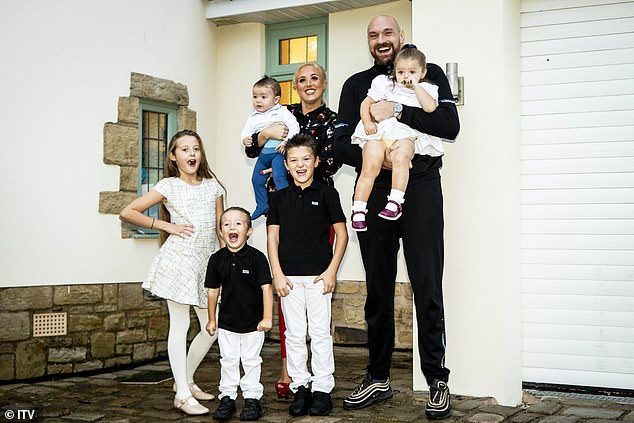 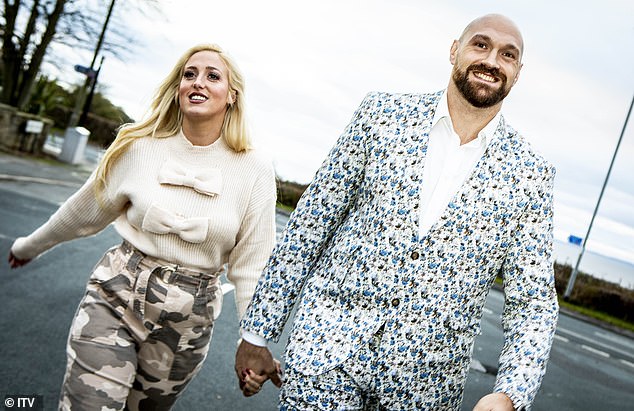 ‘I remember when he got in the Ferrari before he left he said: “I’m not coming back”,’ she confessed. ‘Then as the day progressed and his phone was off I started calling his dad.

‘I said, “Have you heard from him because I don’t know where he’s at? I am worried, he was talking silly this morning.”‘

Tyson ballooned to over 28-and-a-half stone (400lbs) and struggled with depression and addictions to cocaine and alcohol after defeating Wladimir Klitschko in November 2015.

Paris explained: ‘He’d done what he’d always wanted to do. He was on top of the world. We had everything anyone could ever dream of.

‘We had our kids, had our money, fame, glory. But inside he was torn to shreds. That was it, end of the line.’ 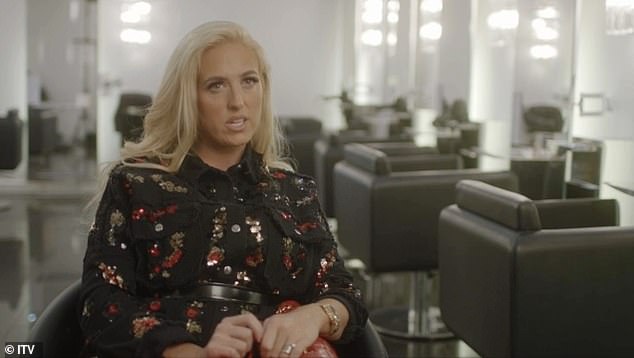 The mother-of-five, who has been with the heavyweight boxer since she was 15, emotionally recalls her husband’s mental health battle in a new ITV documentary, Tyson Fury: The Gypsy King 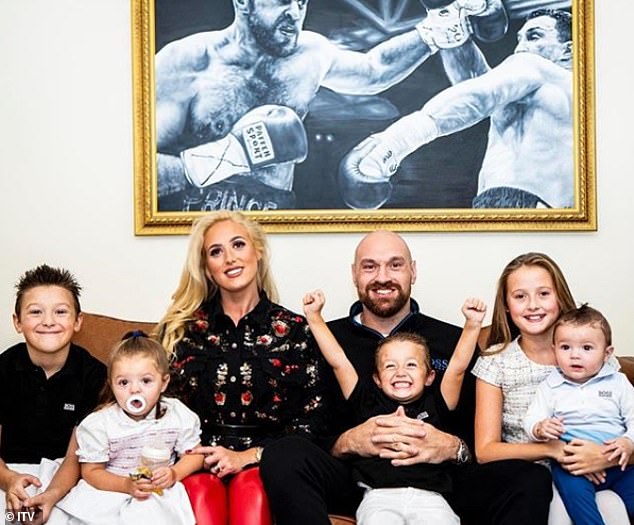 Set to air at 9pm on Thursday, the three-part series follows the former world champion (pictured with his family) as he details his struggles with depression

The heavyweight boxer, who is set to return to the ring on February 22 against American Deontay Wilder, admitted on the documentary that he had woken up that day and thought, ‘Today’s the day I end it all’.

‘I was heading towards this bridge, I was going to smash the car into the bridge at very high speed, I just didn’t have the ambition to live anymore,’ he recalled.

‘Before I got to the bridge I heard a voice saying, “Don’t do this, you’re going to destroy your family’s life,” and I immediately pulled the car over and that was the first time I thought, “Right, now or never. I need to get well immediately”.’

In the months that followed, Fury sought help from psychiatric experts and then embarked on a weightloss programme. 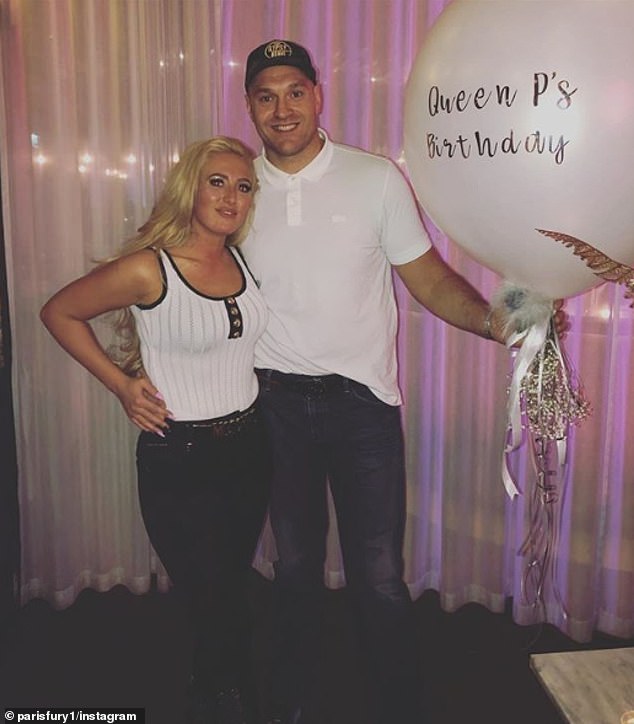 Speaking on the programme, Paris (pictured with her husband) recalls the terrifying moment Tyson told her: ‘I’m not coming back’ before driving 190mph in his Ferrari towards a bridge

Fury shed an incredible nine stone in less than two years before making his comeback in the boxing ring in 2018 against the little-known Sefer Seferi and Francesco Pianeta.

That fight ended in a draw, with Fury surviving two knockdowns, including an incredible 11th minute blow, which saw him beat the count and climb back off the canvas.

The boxer’s strong performance against Wilder earned him Comeback of the Year from The Ring and numerous other awards. 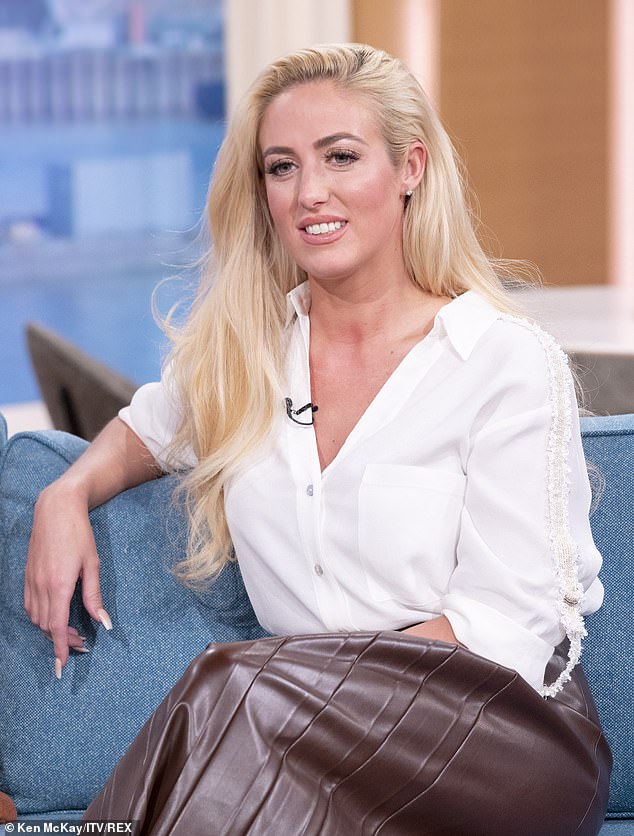 Now Tyson says his happiness is ‘dependent on his wife’ (pictured today) and believes if he goes back to ‘that low, low place’ he won’t be able to recover and will ‘definitely die’

Now Tyson says his ‘happiness is dependent on his wife’ – adding that he believes if he goes back to ‘that low, low place’ he won’t be able to recover and will ‘definitely die’.

‘He’s better at the moment,’ Paris added. ‘I think that’s how you need to look at it. You’re happy, it’s an achievement, don’t dwell on the past.’

Following a successful fight against Tom Schwarz in brutal two-round beatdown for Tyson’s Las Vegas debut, Paris admitted that she was always concerned about her husband returning to his ‘lows’.

She revealed: ‘When he’s not boxing I’m always a bit anxious as it’s all good for him for a couple of weeks and then he gets impatient.

‘Then that’s when I’m thinking, “Where are we at here, are we slipping back into a low point?” Hopefully this time it won’t happen, but it’s going to be a worry every time.’

If you have been affected by this story, call The Samaritans at any time, from any phone, for FREE on 116 123.