This is the adorable moment a playful baby elephant ripped a model’s skirt by clambering all over her.

Megan Milan was visiting Chia Lai Orchid, a sanctuary that rescues elephants in Chiang Mai, Thailand, earlier in June when a three-week-old elephant took a shine to her.

Hilarious footage – which has been viewed more than 12million times on social media – shows the boisterous baby getting close to Megan bumping her to the ground before rolling on top of her. 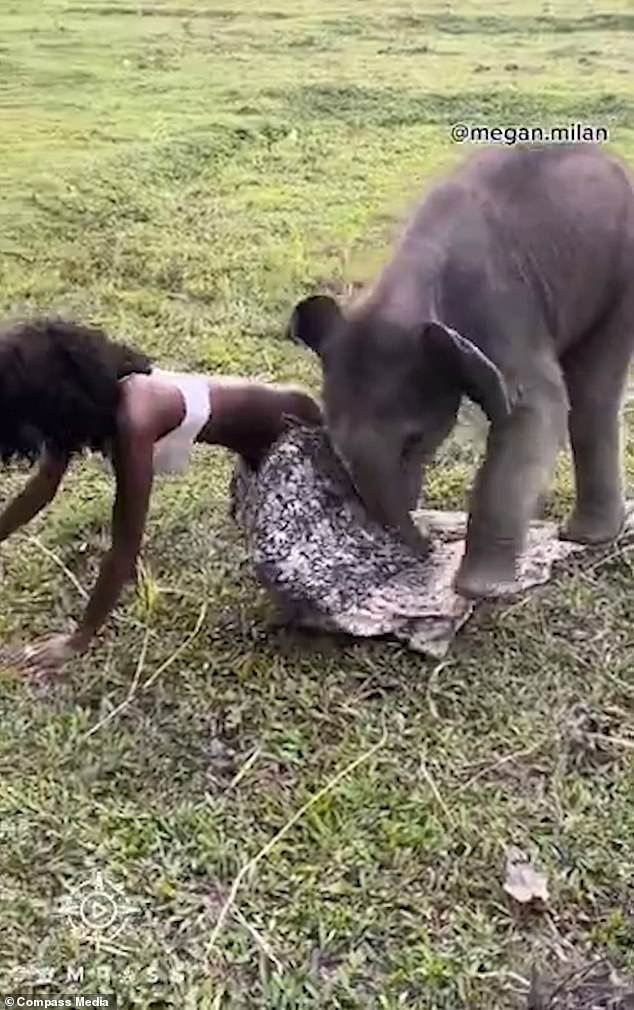 Megan Milan was visiting Chia Lai Orchid, a sanctuary that rescues elephants in Chiang Mai, Thailand, earlier in June when a three-week-old elephant pulled down her skirt, pictured 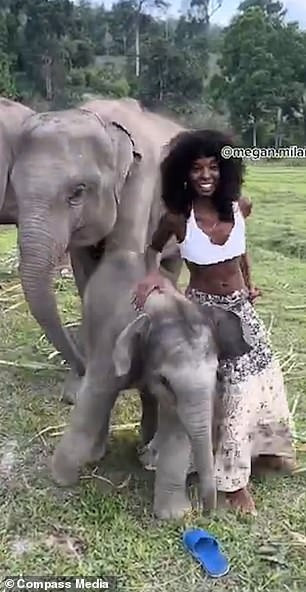 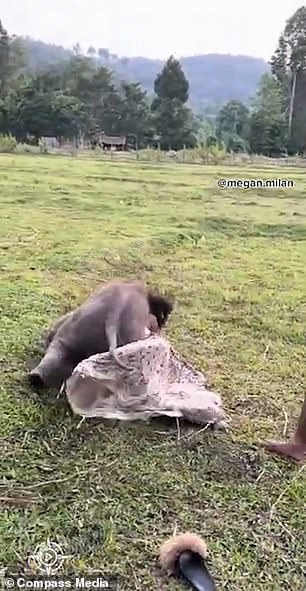 The baby took a shine to Megan as she was taking pictures with the herd. Soon, they were tumbling on the ground together

In the footage, Megan, who was not alarmed, can be heard laughing as the baby elephant comes up to her repeatedly and playfully tugs at her skirt.

But the youngster was stronger than he seemed and managed to Megan’s skirt off by stepping on the hem.

The model then took a tumble, struggling to put up her skirt to cover her modesty as the elephant came back for more playtime.

Eventually, the animal’s older sister came running over to pull the playful nelly away as Megan gathered herself and her ripped skirt. 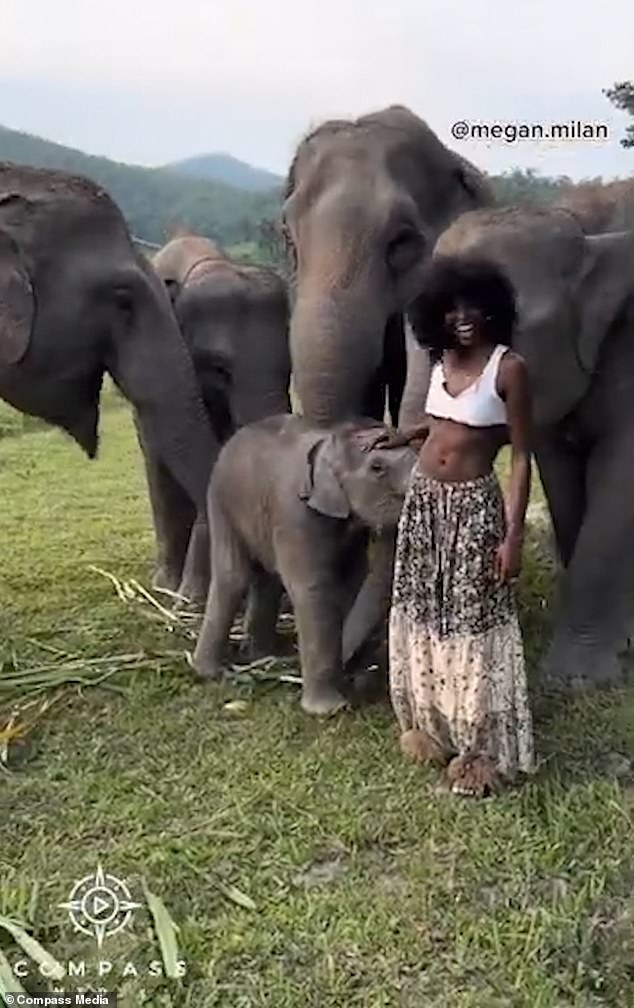 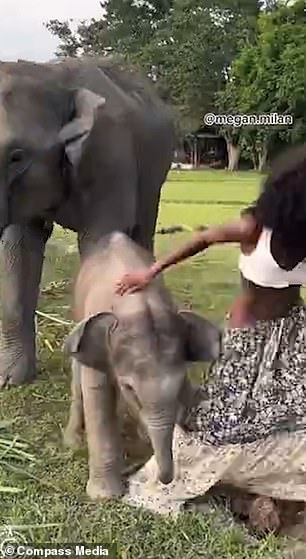 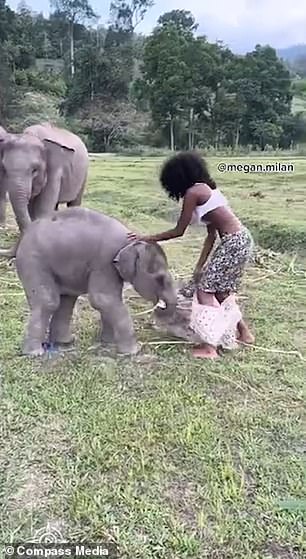 The baby stomped on the model’s skirt, left, forcing Megan to step away. He later pursued her and kept tugging playfully at her skirt 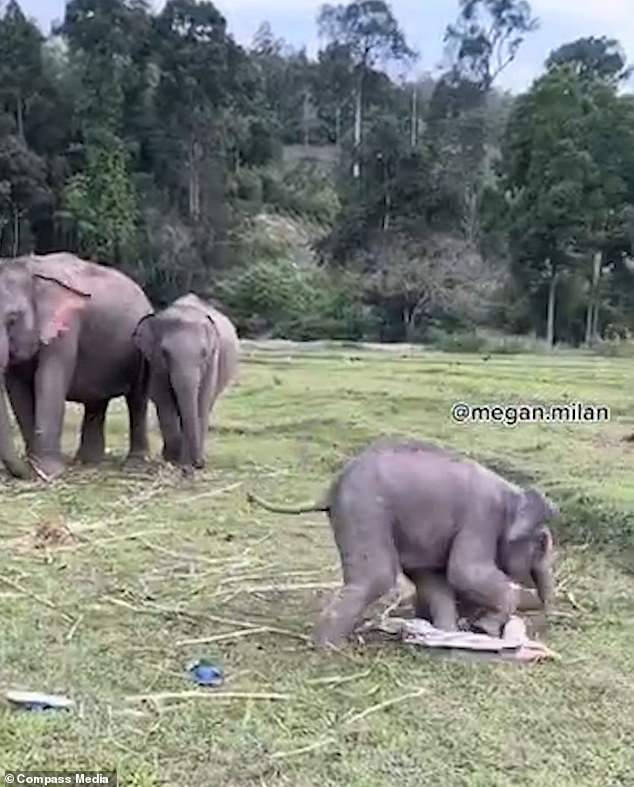 Megan said: ‘I’m used to being around elephants but I had never been around one so young, he’s only three-weeks-old. So I asked to go see him.

‘He was definitely a little heavy and strong.

‘I’m known for immersing myself in other cultures and going on wild adventures. Whether it’s hanging off trains in Sri Lanka or playing with baby elephants in Thailand, I’m always down for a thrill.

‘When I’m not modelling or reading scripts, I travel the world for a living. I’ve always wanted to go to Thailand. 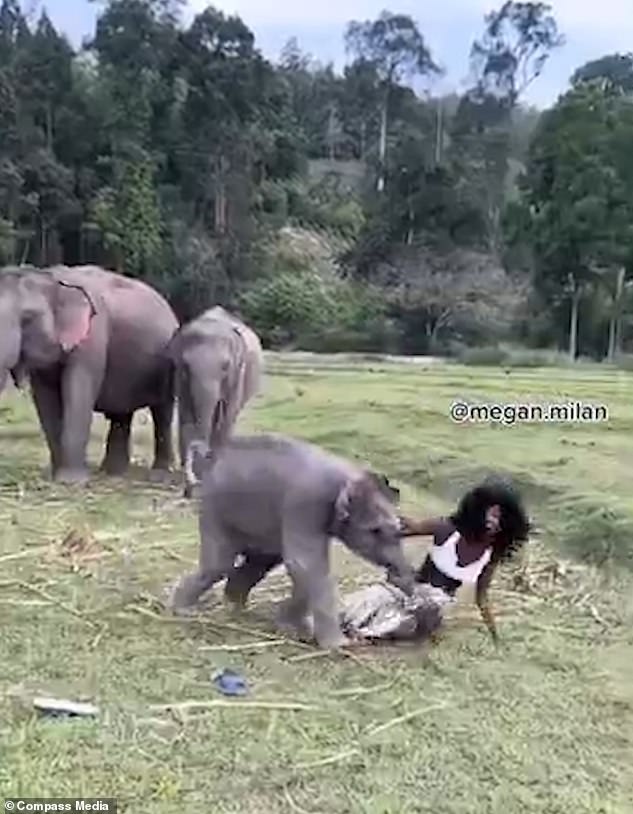 In spite of the elephant’s hands-on approach, Megan was not alarmed for her life and was laughing throughout the incident

‘I found a non-profit organisation, Daughters Rising Thailand, who empower at-risk and rescued indigenous girls and women through education, employment and outreach to prevent trafficking and exploitation in their communities.

‘Coupled with the rescued elephants at Chai Lai, these are two things that I am extremely passionate about so of course I jumped at the opportunity.’

The model was able to find the funny side of her story as she shared the video of the elephant on her Twitter, joking the animal’s big sister had to come and get the baby off her back.

When people voiced their concerns that the elephant was violent, Megan defended the animal, saying: ‘He’s literally 3 weeks. Elephants don’t just go around hurting people. They are one of the only animals with empathy. That lady helped his fam get poached! Elephants don’t forget.’

Buses will be better run by Town Halls say voters