Viewers are left horrified as schoolgirl, 15, is rushed to hospital on 24 Hours in A&E after being stabbed in the thigh by a complete stranger while walking to class with a friend

Viewers of 24 Hours in A&E were left horrified after a 15-year-old schoolgirl described how she was stabbed on the way to class by a stranger.

Meldred, from London, appeared on the Channel 4 programme last night and described how she had been walking to school with a friend when she noticed somebody behind her, before being stabbed in her thigh.

She was rushed to St George’s Hospital in Tooting, where doctors ordered an urgent CT scan to uncover internal damage, before stitching up the wound.

Viewers were left stunned by the episode, with one writing: ‘Just watched #24HrsAE. What kind of world are we living in when a 15 year old girl gets stabbed by a complete stranger while walking to school!?’ 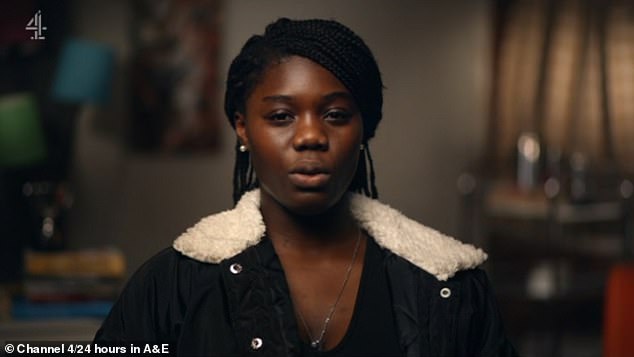 Viewers of 24 Hours in A&E were left horrified after 15-year-old schoolgirl Meldred, from London, described how she was stabbed on the way to class by a stranger.

Another commented: ‘Poor girl. She was just walking to school.’

A third added: ‘Blimey! What a way to start the episode.’

At the start of the episode, consultant Mark described the damage a stab wound could have,  explaining: ‘The knife will go through skin and muscle first and then damage any number of deeper structures, from tendons, ligaments and arteries.

‘It can be a range of minor injuries through to something fatal.’ 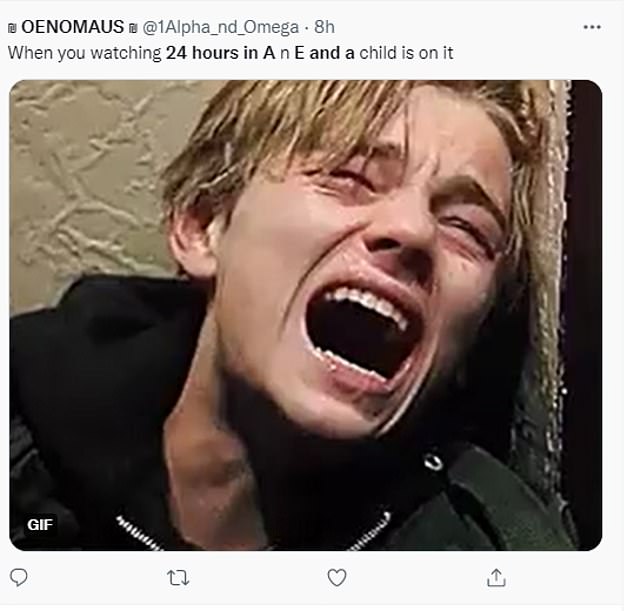 Viewers were left stunned by the details of the stabbing in the peisode, with one asking ‘what kind of world’ we live in

Meanwhile Meldred’s mother Joyce said: ‘That morning, I saw  Meldred in my room doing her hair. When she finished, she called, “Mum I’m going to school.”

‘And I thought, okay I’ll see you later. And she closed the door.

‘A few minutes later and I heard the house line ringing. It was my husband and he said “Meldred got stabbed.'”

She explained she was stunned when she heard news, adding: ‘I was shaking, nervous, shock – that moment, [I wondered] Why Meldred? 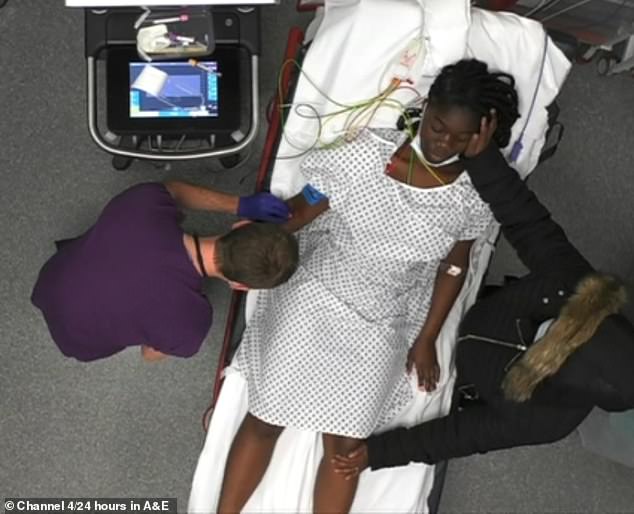 Meldred described how she had been walking to school with a friend when she noticed somebody behind her, before being stabbed in her thigh

Meanwhile PC Harris, a response officer, explained: ‘When we got the call, the last thing I expected to hear was those two words, schoolgirl and stabbed. I’ve never been to an under 18-year-old who had been stabbed.

‘I was trying to get us to the right place as soon as possible, your palms start to get sweaty, you start to maybe shake a little bit because you’ve got a lot of adrenaline.

‘Being the first on scene is quite a high pressure feeling. If she’s been stabbed in the leg, there is a strong chance she might have an arterial bleed. If it is, you have seconds to do something about it.’ 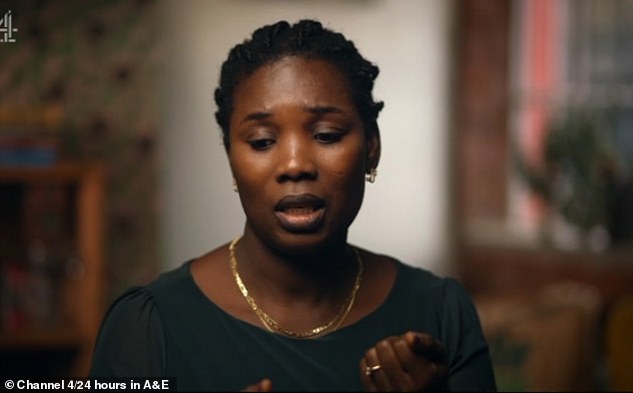 Joyce said: ‘When I got to the hospital, I wanted to see if she was alive. I screamed, “Meldred, Mum is here.”

A paramedic described how Meldred had been walking to school with a friend and noticed a stranger walking behind them.

She felt a pressure in her right thigh and ‘only realised she had been stabbed when she saw blood on the floor.’

The doctors told Meldred she would have to have an urgent CT scan so they could understand the full extent of her injuries. 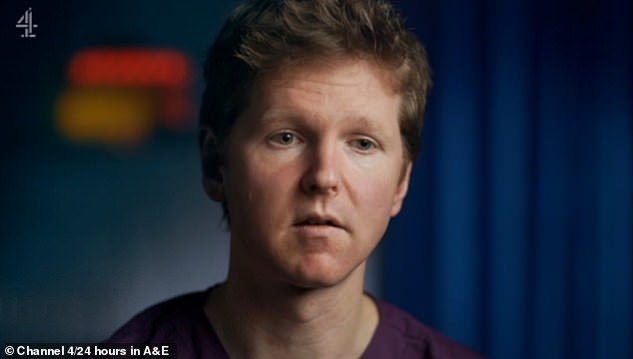 Consultant Mark described the damage a stab wound could have, explaining a CT scan could show the impact on deeper structures

As her daughter was taken in for a scan, Joyce couldn’t hold back her tears, saying: ‘I don’t understand this, taking a knife and you know what you are doing can take somebody’s life.’

PC Harris explained: ‘It’s one of the things you join for, coming in to someone’s life at the worst possible times. Sometimes you just have to console people.

‘I think you start to see the world in a very divided way. Ordinary people’s lives have been dragged into something they would otherwise have nothing to do with.’

Joyce said: ‘Meldred is the daughter everyone wishes they had. She is my joy, and she knows how to talk to people. She will make you happy.’

After a day in A&E, one of the doctors Phil told Meldred and Joyce that nothing had shown up on the scan, and they would be stitching up her wound. 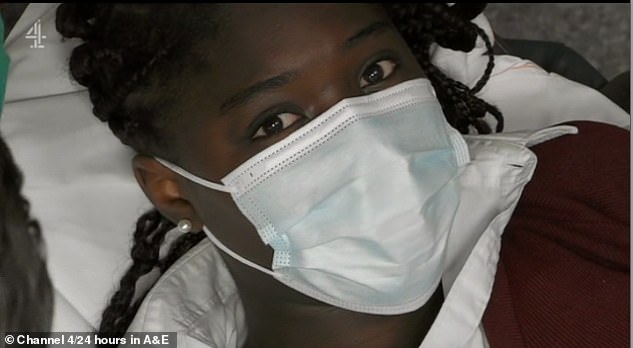 Police spoke to her to try to identify who the man was who attacked her, with the teenager confessing she had ‘never seen him before’ but she would ‘instantly recognise him.’

Officers told her: ‘This is so rare, so so rare. Do you know if he touched your friend at all?’

Meldred explained: ‘No, I kind of moved her in front of me. Do you have any idea  why someone would do something like that?’

The officer continued: ‘I think you’re just very unlucky, you just happen to be in the same place when he decided to strike. You couldn’t have done anything differently.

‘You can’t blame yourself because you couldn’t have done anything differently.’

After she had the stab wound stitched, doctors told her that it was ‘completely normal to feel angry, scared or upset’, saying: ‘It will go away.’

At the end of the programme, Meldred said: ‘I am starting to regain my strength and regain my confidence. Growing up in London, you always hear about other children being affected by this violence and kids your age dying.

‘You just never thought it would be you.’

She added: ‘I’m still determined to do everything that I wanted to do . I shouldn’t allow certain things to push me off my track and make me feel weak or lesser than.

‘I definitely feel I gained that resilience from my mum. I realise how much influence she has on me all the time.’

‘Mr. Robot’s’ final season will be one long Christmas special

What happened at the Verzuz rap battle with Bone Thugs-N-Harmony?

16 and Pregnant Star Jordan Cashmyer's Cause of Death Revealed