A man who unwittingly created an assassin hiring website has revealed how the spoof hitman service helps catch prospective murderers.

Bob Innes, 52, from California, created RentAHitman.com in 2005 as part of a university class project and forgot about the satirical website until three years later, when he checked the site’s analytics while bored.

He discovered the site was attracting 6,000 visitors per month and that the inbox had been inundated with genuine requests for murder – inspiring Bob to set out catching the criminals.

Bob decided to change the format of the parody website to include application forms for ‘field agents’ to carry out murder plots so that he could collect more personal details of budding killers to pass on to the police.

Criminals have been caught and jailed because of the site, with one Michigan woman sentenced to up to 20 years in prison for trying to hire a contract killer to whack her ex-husband just last week. 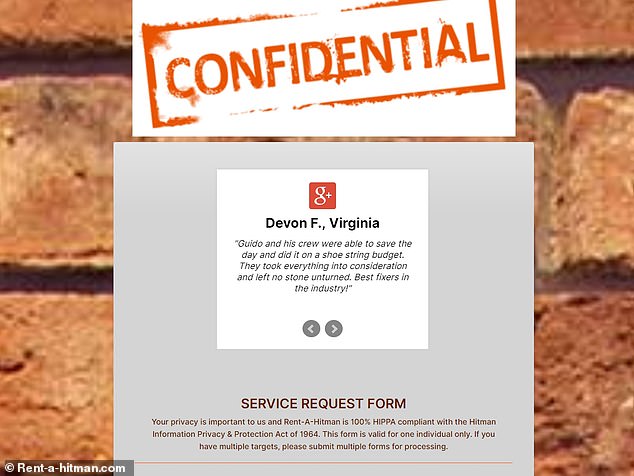 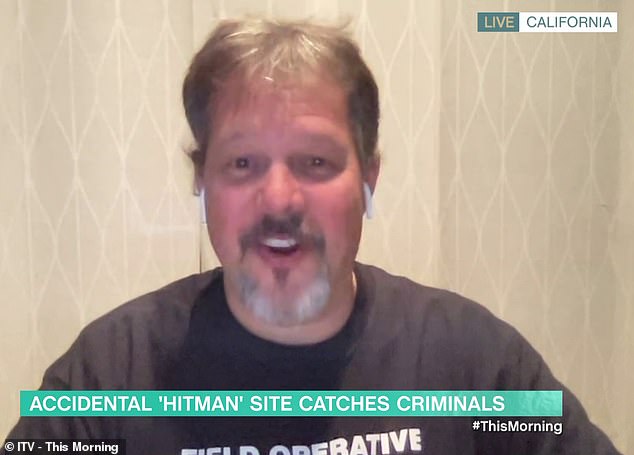 Bob Innes, 52, created RentAHitman.com in 2005 as part of a university class project and has since been inundated with genuine requests for murder

Appearing on This Morning from his California home, Bob explained: ‘I did have it up on several auction sites, unfortunately nobody was interested in purchasing it.

‘I went back into the inbox and found 250-300 emails from people around the world who had requests for asset extraction, or how much for a hitman, do you serve these countries? I was just flabbergasted.’

The website features glowing testimonials from pretend customers and promises to ‘make any troubled relationship disappear’ by filling out a consultation form with all  their personal details.

Users can even apply to be a ‘field agent’ with the make-believe hitman service, or donate money to those ‘desperately seeking consultations’ by keeping the website up and running. 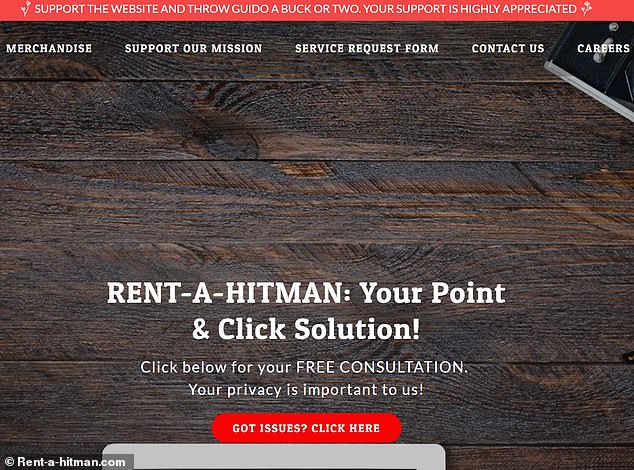 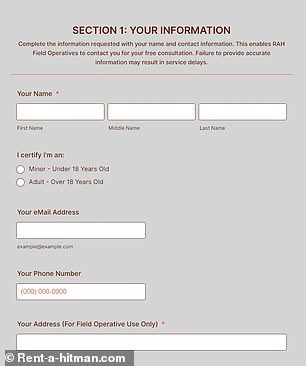 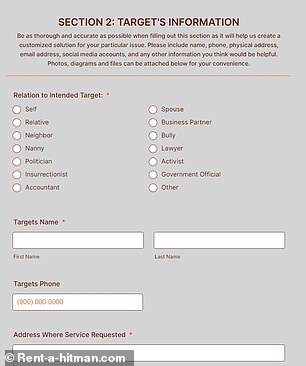 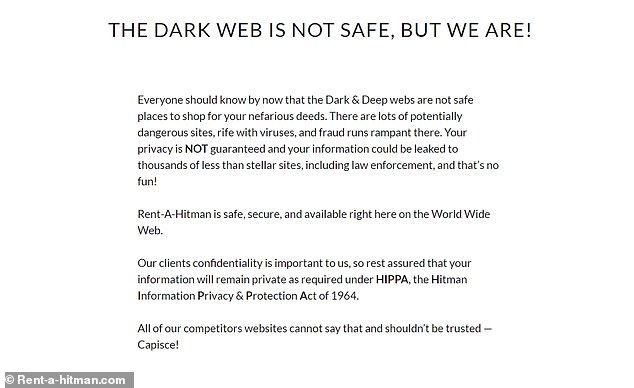 ‘Primarily they were just one-line emails asking if they served these countries, do we serve minors, how much to take someone out in this particular country. There wasn’t really enough information to go off initially,’ explained Bob.

Would-be murders who have been snared by RentAHitman.com

The site has reportedly caught around a dozen would-be killers who have contacted Bob’s alias for a contract killer.

Wendy Lynn Wein, 52, of South Rockford, pleaded guilty on November 12 to using the RentAHitman.com site to hire someone to kill her ex-husband and for using a computer to commit a crime in July 2020. 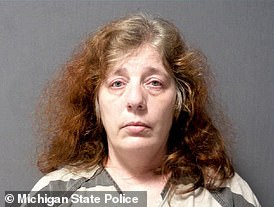 Wendy Lynn Wein, 52, of South Rockford, Michigan, was sentenced to seven to 20 years in prison on Thursday for using a fake hitman website to take out her ex-husband

Last week she was sentenced to seven to 20 years in prison on Thursday and will be credited the 545 days she’s already spent in jail.

Bob is also said to have helped secure the conviction of Danae Wright, 39, who requested three people to be ‘shut down’ with ‘guns, bombs, anything’.

Wright, of Oakley, Kansas, was sentenced to 34 months in probation in February after admitting criminal solicitation to commit murder in the second degree.

The idea to use the site to catch criminals began in 2010 with a British woman referred to as ‘Helen’, who was living in Canada.

She contacted the website insisting on hiring a killer to murder three members of her family living in the UK.

After contacting the police, Bob discovered that ‘Helen’ was wanted on ‘more serious’ charges, the Guardian reports.

‘I received an email one morning I was in Los Angeles at the time and Helen’s email was pretty long and convoluted. I could tell this lady was not healthy’, he said.

‘She indicated she wanted three family members murdered because she was upset they had stolen her inheritance, I didn’t read much into it hours later she sent a second email with urgent in the subject line.

‘I read that and the information she was providing was pretty eye-opening I could tell, I had this instinct she was serious about what she wanted done. That was the first email that really kind of started the site as it is today.’

Last week, Wendy Lynn Wein, 52, of South Rockford, Michigan, was sentenced to seven to 20 years in prison after using the website to try and hire a hitman to kill her ex-husband.

Wein had used a fake name to complete a service request on the site in July 2020, writing to Guido Fanelli that she wanted to have her ex-husband killed because he stole $20,000 from her.

Fanelli is the alias Bob uses on the site, which has ensnared over a dozen others who have tried to use the website to hire a contract killer, Rolling Stone reported after Wein’s arrest last year.

‘I will typically wait 24 hours before acting on it [an email], Bob explained. ‘After that period I will ask “Do you need our services, do you want me to contact a field operative?”

‘If the email bounces or they don’t reply, I don’t really act on it. But if they come back and say yes, I would like a field operative to contact me, it’s pretty much game on at that point.’

Bob says the site has turned into a ‘full time job’ with mountains of emails daily but insisted that media attention on the website hasn’t deterred naive users from the site.

‘I get more emails than ever before a lot of that is due to the media attention the website has received, I am busy sorting out and vetting material, if these are hoaxes or if there is meat on the bone. Those are the ones that get taken seriously.’

McDonald's is replacing its Happy Meal toys with non-plastic versions