Home » Lifestyle » Watch and listen: don’t miss these local acts in the next 12 months

As much as we're deluged by creative content from around the world, music, movies, and television made locally matter more. It is through the arts we express ourselves, sparking debates we need to have and answering questions we may prefer to ignore. Here's our pick of the best Australian music, film and television on offer in the year ahead. No doubt, there will be others yet to be announced, but this list is a starting point. Thankfully, in this instance watch and listen isn't a safety reminder, but rather an encouragement.

Baker BoyDanzal Baker began 2020 in Tasmania, standing in the crowd at the Marion Bay leg of the Falls Festival, having performed earlier in the evening. The 23-year-old Indigenous rapper, dancer, and artist, who rose to prominence over the last two years as Baker Boy, was chatting to his brother, eating a taco, and enjoying the midnight festivities. But he was also looking ahead.

“Finishing an album is one of my main priorities for this year,” Baker says. “It’s almost finished, so I want everyone to get ready for what’s going to happen.” 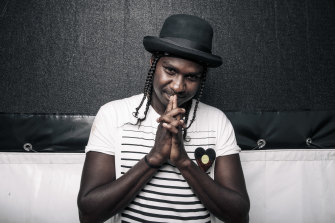 Baker Boy, a hip-hop artist who raps in his Yolngu Matha language as well as English.Credit:Getty Images

It’s not easy to be ready for what Baker Boy makes happen. His music has an expressive energy, with Baker alternating between rapping in Yolngu Matha and English, that’s designed to move hips and sway minds via a mix of hip-hop rhythms and traditional instrumentation. A handful of increasingly popular singles over the last two years – including Marryuna, Mr La Di Da Di and In Control – have forged a prominent career, making his forthcoming and as yet untitled debut album one of the year’s most anticipated recordings.

“Last year was huge, but I guess went overboard with trying to get things done,” says Baker, who has relocated from his childhood home on Milingimbi Island, 440 kilometres east of Darwin, to Melbourne. “I’d rather be at risk of doing too much than not doing it at all. You need new music for everyone each year because if they’ve been listening to one song for ages it gets easy for them to move on.”

In Canberra recently, Baker passed on the title of Young Australian of the Year he received in 2019. He has been working 14-hour days, recording from 10am to midnight, using different producers on songs in a room that is “is full of imagination”. The more tracks he cuts for the album, the more his music evolves. Recent single Meditjin adds a coolly contemplative veneer to his exuberant sound.

“I like to try new things and challenge myself,” Baker says. “Plus, I get really annoyed with my old tracks, because I have an annoying voice. I don’t know what others think, but when my song comes on the radio I think to myself, ‘Oh no, here we go’.”

It’s a problem that’s not going to go away any time soon.

Banoffee (February 21): Melbourne musician Martha Brown returns from an extended stint in Los Angeles, where she was part of Charli XCX's touring troupe, with the experimental electronic album she's long been working towards. A celebration of survival in the face of trauma, Look at Us Now Dad shapeshifts sounds and moods with glinting melodies and melancholic admissions. Expect it to be an underground cause celebre. 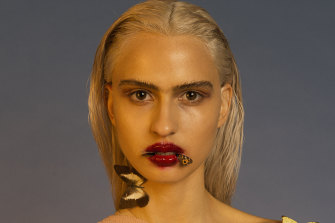 Martha Brown, aka Banoffee: ” It was cool to build a lifeboat and hop on it and realise it was much more than that.”

Adrian Eagle (TBC): Adelaide musician Adrian Eagle has the potential to be one of the year's breakthrough artists. His debut album follows a succession of genre-bending singles and EPs – start with 17 Again and A.O.K. – that showcase his mix of soulful, positivity-laden vocals, R&B grooves, and gospel dedication. 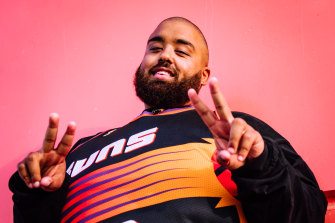 Gang of Youths (TBC): "We'll be back next year, guys, girls, and people who aren't either, with a new album," said Gang of Youths vocalist David Le'aupepe to a sold-out audience in Los Angeles last September. The international success of 2017's Go Farther in Light, plus multiple ARIA Awards, means expectations for the next release from the indie rock band are high.The departure of guitarist Joji Malani a month after that L.A. gig may be a hitch.

Mallrat (TBC): Brisbane pop savant Grace Shaw released music as Mallrat before she finished high school.After writing trips to Los Angeles and touring in Europe, the 21-year-old is working on a debut album that should continue the ascent of her melancholic, transformative electronic pop. Check Charlie and Groceries for what to expect.

Something for Kate (TBC): It's been eight years since the last studio album from the chart-topping alternative-rock trio – albeit punctuated by a highly hummable solo album from frontman Paul Dempsey – but a new selection was recorded in Byron Bay with producer Nick DiDia (Powderfinger) and mixed in Toronto with Howie Beck (Feist). No singles yet, but it's unlikely the Melbourne band's power and invention have diminished.

Tame Impala (February 14): The quartet of songs already released from The Slow Rush suggest Kevin Parker's journey from rock revisionist to pop auteur is close to complete. The single It Might Be Time traversed 1970s AM radio peaks, psychedelic disassociation, and a myriad of percussive pleasures – confirming that Parker, a one-man studio force, should remain one step ahead of expectations on his fourth studio album. 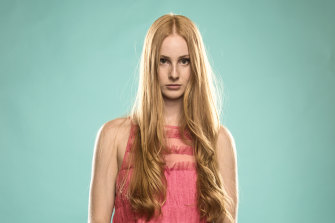 Vera Blue (TBC): Celia Pavey, a.k.a. Vera Blue, is another artist who has laid down trail markers for her next album with a sequence of tracks that have moved from the moody electronic minimalism of The Way That You Love Me to the dexterous, distortion-edged Flue collaboration Rushing Back. She's moved on from 2017's Perennial album, and now it's about her next destination.

Violent Soho (TBC): The Brisbane quartet who made the suburb of Mansfield's 4122 postcode the calling card of their merchandise and a statement of independent intent blew fans' heads off with 2016's Waco album. What's next? "There's a baby boomer across the street and it won't stop staring at me," Luke Boerdam sings on the untitled record's first single Vacation Forever, a churning guitar and backbeat pile-on. It's going to be a big year for moshpits. 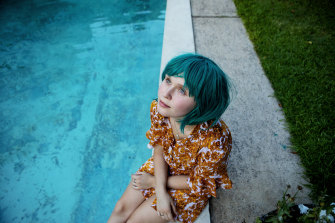 Babyteeth (TBC): In the wake of Little Women's success, where she was Beth March for Greta Gerwig, Sydney-born actor Eliza Scanlen brings even further profile to this coming of age story where she plays a seriously ill teenager with a new boyfriend (Toby Wallace) her parents object to. Ben Mendelsohn and Essie Davis play the adults, a pairing that suggests the drawing power of Shannon Murphy's debut feature. The advance word on this eccentric suburban drama is particularly good.

Dirt Music (TBC): After the box-office success of Breath in 2017, the next Tim Winton adaptation features an international cast – Scot Kelly Macdonald and American Garrett Hedlund – and our own David Wenham in a romantic triangle set against the beautifully harsh landscape of the West Australian coast and its fishing grounds. The director is Gregor Jordan (Two Hands, Ned Kelly), returning to feature films after 10 busy years away.

The Dry (August 27): Eric Bana stars in a crime drama about a federal policeman who returns to his drought-stricken rural hometown after 20 years away and becomes part of the investigation into a murder-suicide connected to a childhood friend. Based on Jane Harper's acclaimed debut novel, it is directed by Robert Connolly, long known for his distinct, telling views of Australian life on film (The Bank, Balibo) and TV (The Slap, Barracuda).

H is for Happiness (February 6): A children's film that speaks eloquently to its audience, this adaptation of Barry Jonsberg's 2013 young adult novel matches a stylised, vibrant aesthetic to the story of a 12-year-old girl and her family dramas. Candice Phee (Daisy Axon) is trying to put her fractured family back together with the assistance of her best friend, Douglas Benson (Wesley Patten). Emma Booth and Richard Roxburgh co-star in an idiosyncratic story of resilience and optimism. 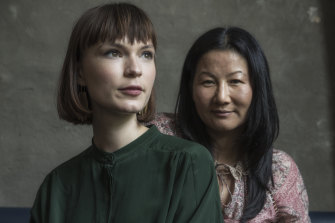 Actress Tilda Cobham-Hervey, left, and director Unjoo Moon. Tilda will play Helen Reddy who became a star with the feminist anthem I Am Woman in the 1970s. Credit:Louie Douvis

I Am Woman (May 21): The feature film debut from Unjoo Moon is a biopic of Australian vocalist and activist Helen Reddy (Tilda Cobham-Hervey), who became an international star in the early 1970s with a string of hits culminating in her titular feminist anthem. Well-received on the film festival circuit in 2019, the film mixes period detail and the timeless story of a woman trying to make her way in an industry controlled by men.

Loveland (TBC): After his pair of terrific outback noir thrillers Mystery Road and Goldstone, writer/director Ivan Sen descends into the underworld of the future with a mystery set in an Asian mega-city that brings together an assassin (Ryan Kwanten), a nightclub singer (Jillian Nguyen), and a disgraced scientist (Hugo Weaving). It sounds like a mix of Jean-Pierre Melville's French crime classic Le Samourai and the cyberpunk novels of William Gibson, fertile ground for avisionary like Sen.

Miss Fisher and the Crypt of Tears (February 27): It's not just comic-book movies that give fans what they want. On the back of the hit television series Miss Fisher's Murder Mysteries, Essie Davis' glamorous detective Phryne Fisher comes to the big screen in a 1930s mystery that moves between Jerusalem, London and the English country house set. Her foil, Nathan Page's police detective Jack Robinson, follows, although it's the emancipated Miss Fisher who will continue to lead the way in fencing, fashion, and flirting.

Fallout (ABC, TBC): After Top of the Lake: China Girl, The Cry, and The Gloaming, Ewen Leslie has proven himself one of the most intriguing actors working on Australian television. He'll shapeshift again for the lead role in this 1950s drama, inspired by controversial British nuclear tests in outback South Australia. Peter Duncan, who helped create Rake, is in charge – while Jessica De Gouw, James Cromwell and Shake Cook also feature.

New Gold Mountain (SBS, TBC): During the gold rush that transformed Australia in the 1850s, approximately 40,000 Chinese came to Australia, and this latest addition to SBS's diverse drama slate looks at that crucial time in our history from their perspective. Filmmaker Ana Kokkinos, director of much of last year's sharply relevant teenage drama The Hunting, is behind the camera.

Shaun Micallef's On the Sauce (ABC, TBC): In his mid-twenties Shaun Micallef swore off drinking, which may have played a part in him becoming one of Australia's funniest people. It also means that three decades later he's the perfect host for this three-part documentary about our enduring obsession with alcohol. Micallef criss-crosses the country meeting people whose lives have been impacted in distinct ways by alcohol. It should not, in any sense of the word, be a dry series. 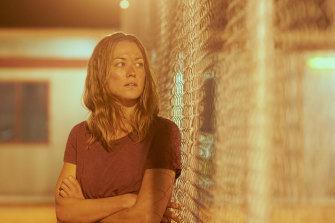 True History of the Kelly Gang (Stan, available today): Reimagining the past to comment on the nation's present, director Justin Kurzel (Snowtown, Macbeth) makes a vivid, sometimes playful portrait of Australia's mythic colonial bushranger. As played by George McKay (1917), this Ned Kelly is a boy run amok – the radicalised son of a persecuted immigrant – on the fringe of society. It can be wayward, but it's boldly conceived and has striking images.

‘ANW Jr’: Laurie Hernandez Hands The Hosting Reigns Over To Victoria Arlen Ahead Of Premiere

Apple’s Powerbeats3 Earbuds Are Cheaper Than Ever