Dua Lipa accidentally referred to Blake Shelton as Gwen Stefani's "husband" during an interview with the singer on Jimmy Kimmel Live. Scroll on to watch the video! 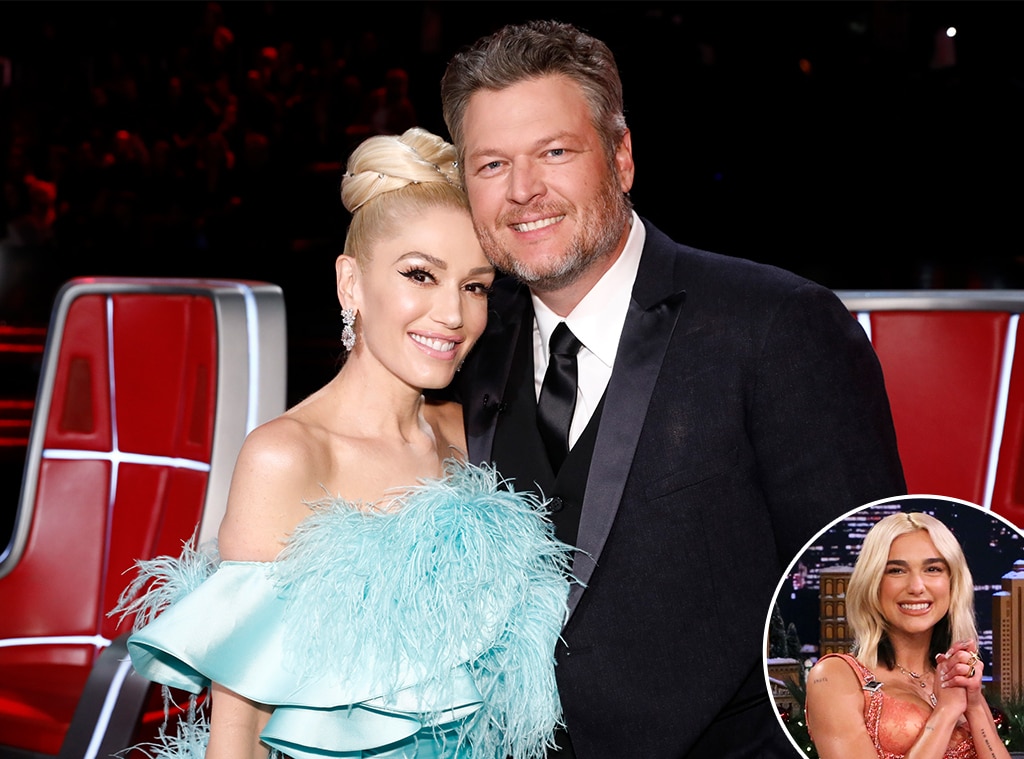 Are Gwen Stefani and Blake Shelton married? Not yet, but the "Cool" singer certainly likes the sound of it.

On Monday, Aug. 10, Gwen made a virtual appearance on Jimmy Kimmel Live to chat with guest host Dua Lipa. During their conversation, the "Physical" singer asked Gwen about her time in Oklahoma with her longtime love.

"So I heard that you've been spending quarantine with your husband Blake Shelton at the ranch in Oklahoma," Dua said as Gwen smiled. "Who else was with you? How was that?"

After taking a pause, Gwen replied, "Um, well…he's not my husband, but that sounded cool when you said it."

Realizing her mistake, Dua started laughing, and the superstars carried on with the conversation like total professionals. As Gwen later explained, she and her family all stayed on Blake's ranch right at the start of quarantine.

"We were actually on his tour right when we got shut down," the 50-year-old star said. "My brother was out with us…so his whole family came out. So it was me, my three boys, Blake, and then my brother, his wife, their two little babies, kids, and then her sister and then a friend."

Gwen said there were about 15 people on Blake's ranch at that one time. "It was really actually a lot of fun at first," Gwen told Dua. "Because it's like, all of the sudden, work is over and you just get to indulge and just being on this ranch…every day was like a new thing."

Britney Spears' Conservatorship Cost Her Over $1 Million in Legal Fees

When asked if she has cowboy boots for the ranch, Gwen explained that she actually has a "bunch" now. The "Wind It Up" singer went on to share that she's had one pair of boots for five years now because "that's how long we've been hanging out, me and Blake Shelton."

Gwen, who shares three kids with ex Gavin Rossdale, started dating Blake in late 2015 after sparking a friendship on The Voice. While answering a series of "burning questions" on Jimmy Kimmel Live, Gwen was asked what Blake would say is her "most annoying" trait.

A surprised Gwen replied, "Um, god, I hope I don't annoy him at all. If I'm being serious, probably being on my phone, he doesn't like that probably. But he likes me a lot, so…I can do no wrong."

Watch the video above to see Gwen talk more about Blake and their new song "Happy Anywhere."

Ideal night in involves leaving work by 5.52pm, a curry and TV by 8.13pm, poll finds