What’s REALLY behind Carole Middleton’s PR blitz? Royal granny’s decision to give TWO interviews (plus a very glamorous photo shoot) after 15 years of keeping mum, can’t help but fuel the intrigue over rumoured ‘rift’ between Kate and Meghan

For someone who recoils from public attention, it is the most unexpected of developments. Ever since her daughter Kate was first courted by Prince William 15 years ago, Carole Middleton has been the model of discretion.

Only once has she spoken out to voice her concerns about the impact that scrutiny has had on her life: ‘I’m not a celebrity and don’t want to be one,’ she volunteered. ‘Celebrities have minders and PR people. I don’t want a PR person and wouldn’t want to have to pay to employ one. I haven’t asked for all this.’

‘All this’, of course, was the relentless focus she has faced, on everything from her appearance, to her early life in a humble council flat and mockery over her social background, to her children and her marriage. 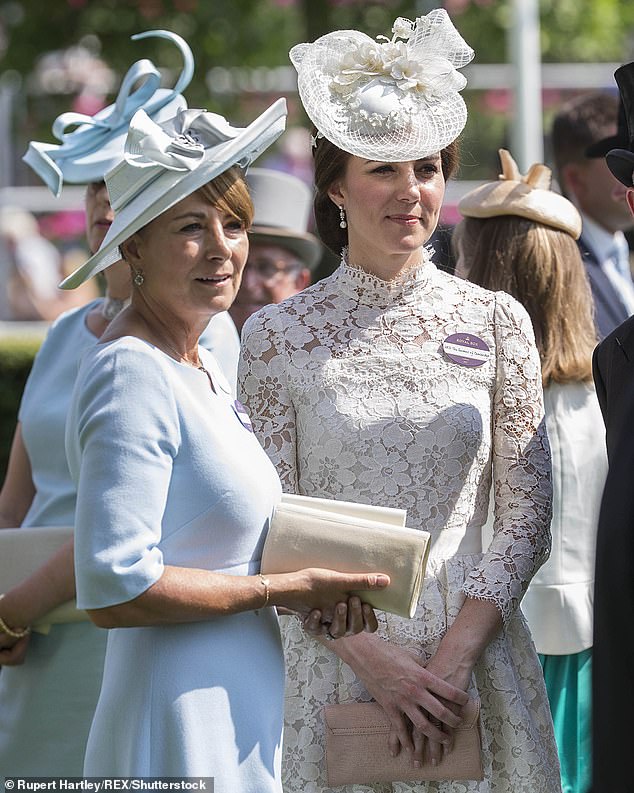 This rare intervention was long before Kate and William were even married, and years before Carole became the indispensable and capable grandmother to the future king. Even when the couple were engaged, Carole confined her public comments to just five words.

‘We’ve never done this before,’ she said, deferring to her husband Michael, who read from a written statement of their happiness at their daughter’s betrothal to the Queen’s grandson.

So her decision suddenly to grant not just one, but two, softly-softly magazine interviews has left courtiers baffled and also a little uneasy.

First, she appeared in a broadsheet newspaper’s colour supplement on Sunday. Now, she has also been interviewed in the new edition of Good Housekeeping magazine.

Is this, they wonder, the start of some new public relations strategy, or it simply a sign of the business-savvy drive of the very practical Mrs Middleton?

That the interviews appear at the very moment questions are being asked about her daughter’s frosty relationship with her royal sister-in-law, the Duchess of Sussex, is surely a coincidence.

Palace officials have been desperate to downplay talk of a rift between Kate and Meghan, and insist there has been no falling out which has affected their husbands’ closeness.

Nevertheless, aides privately concede that the two duchesses do not get on particularly well. So Carole’s decision to speak now, however coincidental, has only served to add to the intrigue.

Until Meghan and her very unconventional family came along, the Middletons were the number one in-laws. Welcomed into the Royal Family by William, they have been given front row seats at almost every key event since his Westminster Abbey wedding to their daughter in 2011.

They have cemented their place in royal life in a manner unthinkable a generation ago. In the process, they have nimbly avoided the traditional fate of royal in-laws down the ages. 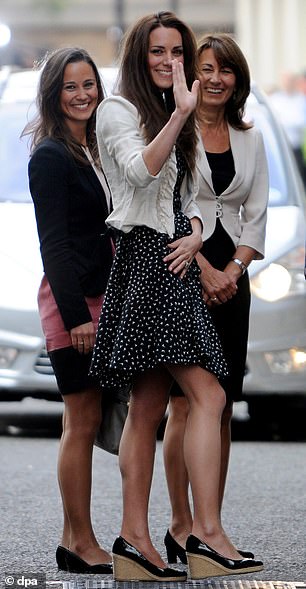 Carole Middleton with Kate and Pippa in 2011

For years, the Middletons’ predecessors have been solidly sidelined and rarely invited to Royal Family gatherings.

Yet, two years ago, the couple were guests at Balmoral, the most intimate and private of all the royal residences, and Carole was photographed there in the front passenger seat of a car being driven by the Queen.

Not only did this bestow royal approval for the manner in which the couple have handled being thrust into the public eye, it also put an end to claims they were being frozen out because of their close involvement in the upbringing of the Queen’s great-grandchildren.

Carole, remember, is the only grandmother George, Charlotte and Louis have and as such has been a vital consoling presence for Kate as well as an extra pair of hands.

But Meghan’s arrival has undoubtedly upset this particular royal applecart.

The former actress’s fluent public appearances and the grace and dignity of her mother Doria, as well as her father Thomas Markle’s bizarre pre-wedding meltdown, have made her a firm favourite.

With Harry by some distance the most admired royal after the Queen, he and Meghan have become one of the most glamorous couples on the planet.

His popularity and her campaigning zeal are fast turning the Sussexes into a daringly modern royal power couple. Factor in, too, Meghan’s pregnancy, which means another grandparent sharing the limelight with Prince Charles.

Some say this has all had a knock-on effect on the perception of William and Kate with the public.

Next year, when Harry and Meghan become parents, all eyes will be on them even more. And on softly-spoken Doria.

Ever since Prince Charles gallantly took her arm at Harry and Meghan’s wedding in St George’s Chapel, Windsor, he has become a huge admirer of the former yoga instructor and social worker. 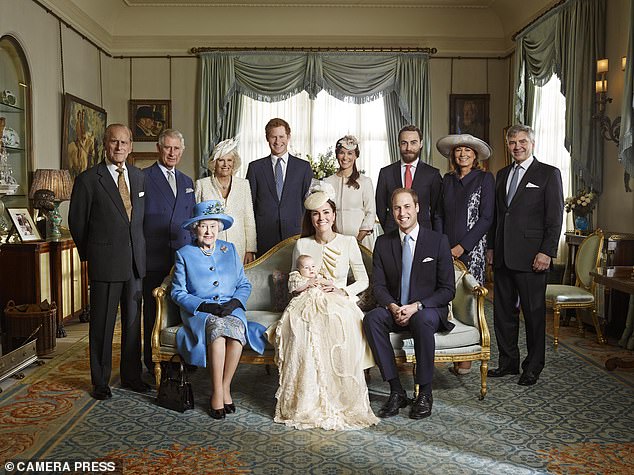 The official christening photo of Prince George, attended by his maternal grandparents (back right)

While his relationship with the Middletons has been cordial rather than close, he has been irked that they have been closer to the grandchildren than he has been.

Some in royal circles suggest that as a consequence he has wanted to build a closer understanding with Harry’s mother-in-law.

These competing dynamics make Mrs Middleton’s interviews with the Telegraph and Good Housekeeping so intriguingly timed.

Outwardly, they were to mark the 30th anniversary of Party Pieces, her mail-order one-stop shop for party paraphernalia, but for a woman who has always proceeded with such caution, she must have agonised over the decision.

At the forefront of her thinking would have been the risk of speaking out, however well-intentioned. After all, she only had to ask daughter Pippa, who was ridiculed after the publication of her party-planning book Celebrate, with its painfully obvious pieces of advice.

Even the royals themselves have come a cropper with business enterprises: think of the Countess of Wessex and her PR company. And the Duchess of York, a free spirit commercially, has suffered embarrassments.

Inevitably, the question being asked yesterday was why Carole chose now to break her silence.

Experience, surely, would have told her that whatever she said it would be reported far and wide.

So I am certain that even though she would not have needed her son-in-law’s permission, she must have sought it.

‘Make no mistake, Carole would not have done it if there had been any objections,’ says an old friend of the Middletons. ‘In all these years, she hasn’t put a foot wrong, and while she doesn’t rock the boat she would also have wanted to ensure there was approval.’ 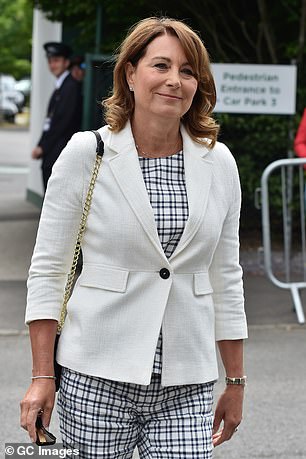 The disclosure that Kate sent her a text to wish her good luck ahead of the photoshoot indicates that her eldest daughter was in on it. Pippa and their brother James also gave their support to the project.

‘It was very much a family decision,’ a close source tells me. ‘The feeling was ‘why not’? Thirty years is a fantastic anniversary and is something to celebrate.’

However, I understand the timing of the interviews was critical.

According to a family source, the dates were deliberately chosen so they did not coincide with anything royal going on.

‘Carole did not want to be accused of distracting from anything,’ says the source.

There may be a clue in that brief exchange she had all those years ago, when she told a newspaper diarist: ‘I feel very vulnerable about everything,’ adding: ‘I’m concerned about my business; that’s my focus. I don’t want the attention to detract from that.’

And the fact is Party Pieces has been a very good business. It began when she was pregnant with her son James and, keen for something to do, she hit upon the idea of providing all the bits and pieces for the parties that friends of Kate and Pippa were having.

Today there are around 7,000 products, which, during the busiest periods, generate 4,000 orders a week. And Christmas is clearly the busiest time of all.

So, on one level, Carole’s interviews make perfect business sense. But if the enterprise has been such a phenomenal success, one is tempted to wonder why it should need any additional publicity. As a private company, run as a partnership, the firm does not have to publish its accounts or reveal any financial details.

Most small businesses in Britain are run as limited companies, which means their accounts have to be filed at Companies House, where they are available for all to see as a matter of public record. 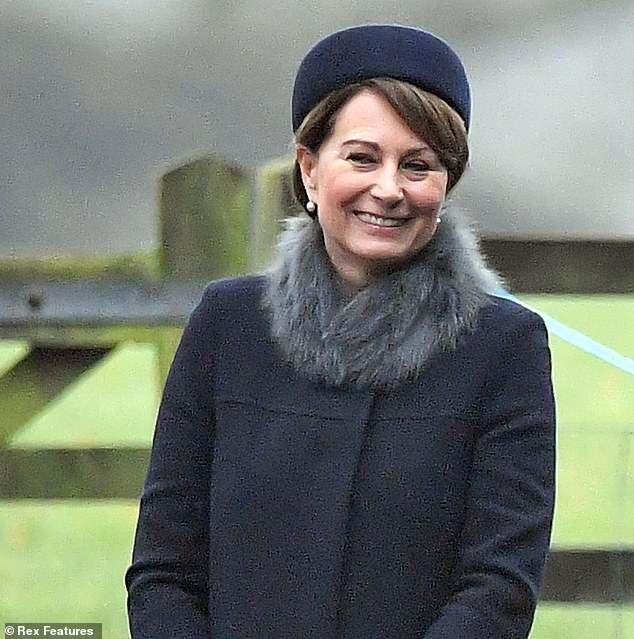 Carole Middleton leaving the Sunday church service at The Church of St. Mary Magdalene at Sandringham in 2017

But being a general partnership, Party Pieces’ accounts remain strictly between the Middletons and the taxman. This arrangement has tax advantages because it means they are taxed as individuals through income tax, and may pay lower National Insurance contributions.

The downside is that, should the company fail, all their worldly goods — including their home would be at risk. Yet that is hardly likely.

At the time of Kate and William’s wedding, retail analysts predicted that the company, based a few minutes’ drive from the Middleton family home at Bucklebury, Berks, was worth £30 million.

In the years since it has boomed. Carole and Michael are the only shareholders and the only directors.

So might they be looking to retire? Mike is 70 next year and Carole is 63.

Brand experts say it is the royal link that generates their firm’s huge turnover. From her interview, Carole did not give the impression of someone wanting to sell up. Party Pieces is her baby and she is incredibly proud of what she has achieved.

Her enthusiasm for life, for family and for work shine through.

If nothing else, her interview reveals a kindly figure, cautious but also fun. Just the sort of motherly woman Kate might grow into.